An increased number of small earthquakes near and under Japan’s highest and most noted volcano, Mt. Fuji (within 30 km radius), concern government and local officials. In the worst case scenario, a new eruption of Mount Fuji could force some 567,000 people to evacuate their homes. A new evacuation plan by The Shizuoka Prefectural Government assumes that more than 130,000 people from approx. 50,000 households would have to relocate if “lava” were to reach residential districts in the city of Fuji located just south of the 3,776-meter mountain. The plan is based on a hazard map prepared by the central government based on Fuji’s last eruption from Hoei crater, in 1707.

10 evacuation zones have been divided into 4 grades and designated at the foot of the mountain based on the expected direction of lava flows. Evacuation from wider areas could be needed, depending on the number and locations of vents. The Yamanashi Prefectural Government is preparing a similar evacuation plan. New plan also includes joint evacuation drills in Shizuoka, Yamanashi and Kanagawa prefectures. 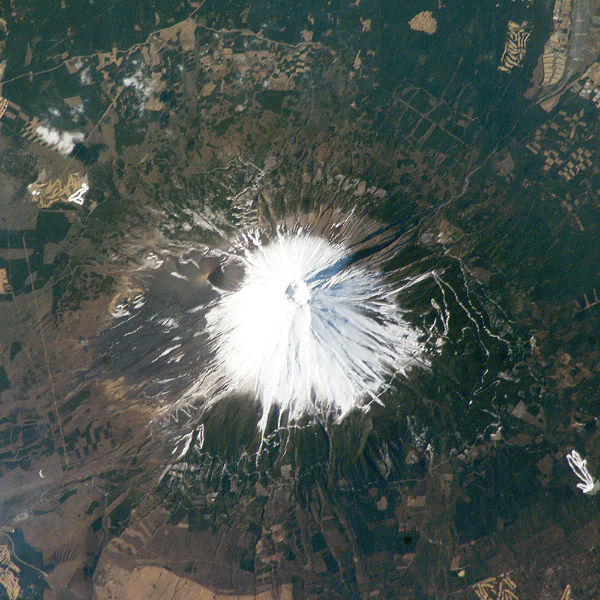 Mt. Fuji captured at astronaut photograph ISS008-E-17326, on February 28, 2004, provided by the Earth Observations Laboratory, Johnson Space Center. Additional images taken by astronauts and cosmonauts can be viewed at the NASA/JSC Gateway to Astronaut Photography of Earth.

Tokyo’s metropolitan area, at about 13,388 square kilometers (5,169 square miles), is home to more than 32 million people, making it the most densely populated urban area in the world. Tokyo residents live within striking distance of Japan’s tallest volcano, which is also the country’s highest point at 3,776 meters (12,388 feet). Mt. Fuji is still considered active. 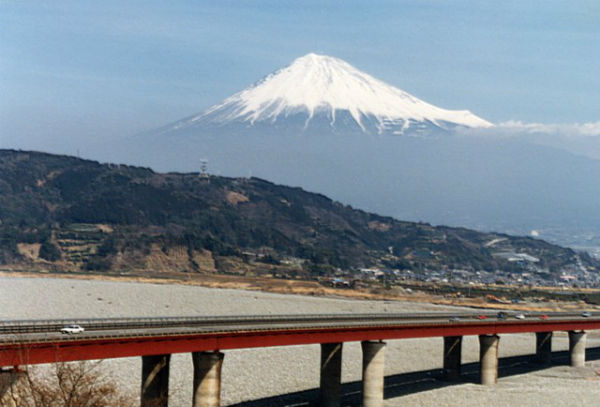 Snow-capped Mount Fuji towers above the major Tokyo-Osaka highway that skirts the coast of the Pacific Ocean in southern Shizuoka Prefecture. The symmetrical profile of the 3776-m-high volcano is interrupted by the knob on the right (SE) flank just above the cloud bank. This is Hoei-san, a remant of Ko-Fuji (Old Fuji), an ancestral volcano that preceded the construction of the modern edifice.. (Credit: Ichio Moriya (Kanazawa University).

The last confirmed eruption of this dominantly basaltic volcano in 1707 was Fuji’s largest during historical time. It deposited ash on Edo (Tokyo) and formed a large new crater on the east flank. The most recent activity recorded at Mt. Fuji volcano was increase of pressure in the magma chamber in September 2012. The pressure in September was higher than it was before the last eruption in 1707. According to Kyodo News, the pressure in the magma chamber beneath the Mt. Fuji has drastically increased after the tsunami in March 2011 and strong M 6.4 earthquake near the volcano four days later.  The number and intensity of earthquakes are still not at alarming levels, however, government officials have put a close watch on Mt. Fuji.

Featured image: Snow-capped Mount Fuji rises above mountains at the SW end of the Kanto plain in this view from Tokyo Tower. Ash fell on the ancient capital of Edo (Tokyo), 100 km to the NE, during the last eruption of Fuji in 1707.  (Credit: Richard Fiske/Smithsonian Institution)