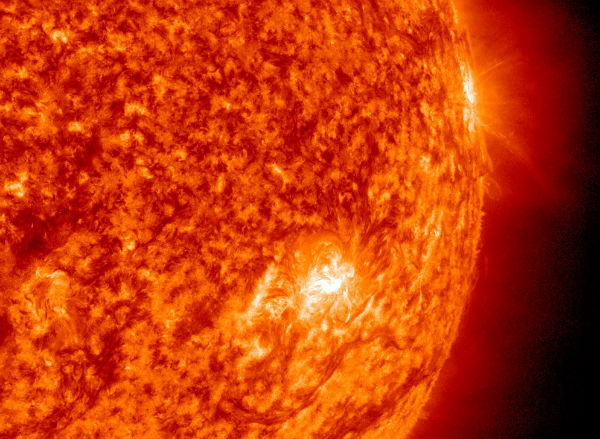 This is second M-class event of the day. Region 1618 already produced M1.6 solar flare at 15:57 UTC today. Extreme UV radiation from this explosion created some waves of ionization in Earth’s atmosphere above North America and Europe.

Region 1618 appears to be decaying but it is difficult to determine size and magnetic configuration with its proximity to the west limb.

Region 1620 developed magnetically into a beta-gamma-delta configuration and continued to show growth in its intermediate spots. A new sunspot rotated into view off the northeast limb and should be numbered 1623 in the coming hours.

NOAA/SWPC forecasters estimate 35% chance of M-class and 5% chance of X-class event in the next 24 hours. 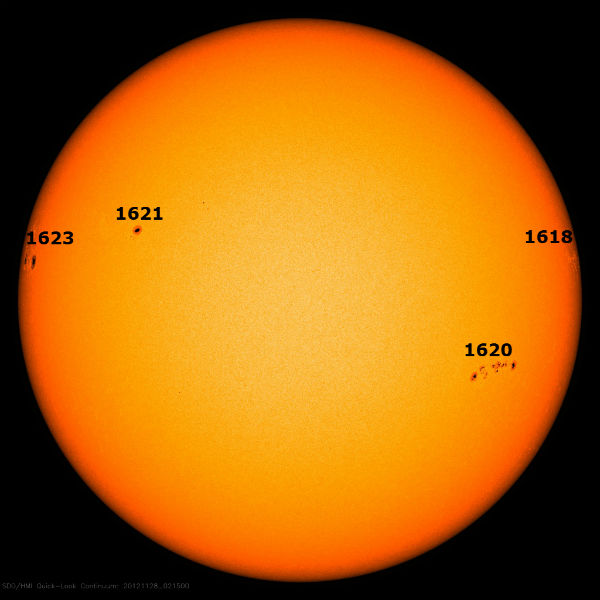 Two CMEs were observed in the morning on November 27, 2012. The first became visible as an EUV wave in SDO’s AIA 193 imagery beginning around 02:45 UTC on November 27, 2012 and appears to have been associated with a disappearing filament. The second CME appears in SDO’s AIA 193 imagery at 05:30 UTC. Further analysis is being conducted on these two events to determine geoeffectiveness.

The CME first appeared in the SOHO’s LASCO C2 field of view at 02:36 UTC, had angular width of around 210 degrees and speed around 850 km/s. It was associated with an eruption of a filament situated around N22E65, to the east of AR 1621. The eruption was accompanied by coronal dimming and a post-eruption arcade observed by SDO’s AIA. The CME was directed eastward of the Sun-Earth line, so only the arrival of  a CME-driven shock at the Earth is expected, probably on November 30. It may result in active to minor storm geomagnetic conditions. 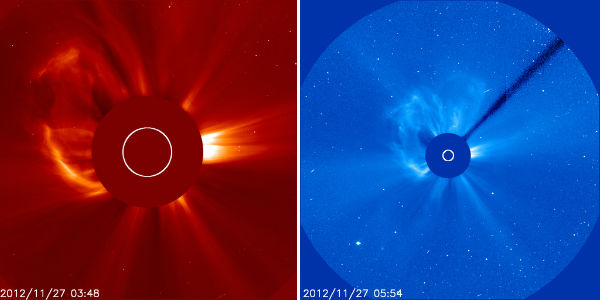 The geomagnetic field has been at quiet levels for the past 24 hours. Solar wind speed, as measured by the ACE spacecraft, continued to decrease from approximately 500 km/s to 415 km/s as the effects from the November 23 CME subside. Total IMF reached 5.7 nT at  21:05 UTC on November 26. The maximum southward component of Bz reached -2.8 nT at 17:22 UTC on November 27.