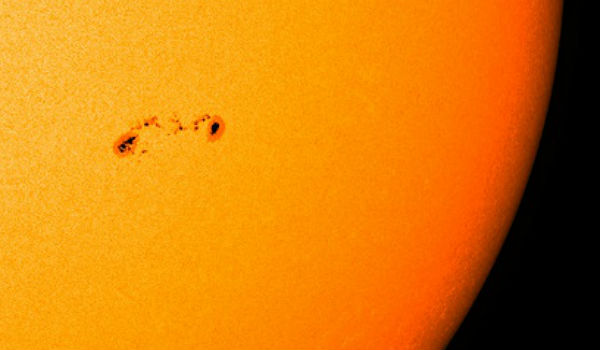 Five sunspot groups were reported today by Catania. Sunspots AR 1618 and AR 1620 have beta-gamma-delta and beta-gamma configurations of their photospheric magnetic field, respectively, and are being closely monitored for further flaring activity. NOAA/SWPC forecasters estimate 30% chances of M-class and 5% chances for X-class activity. 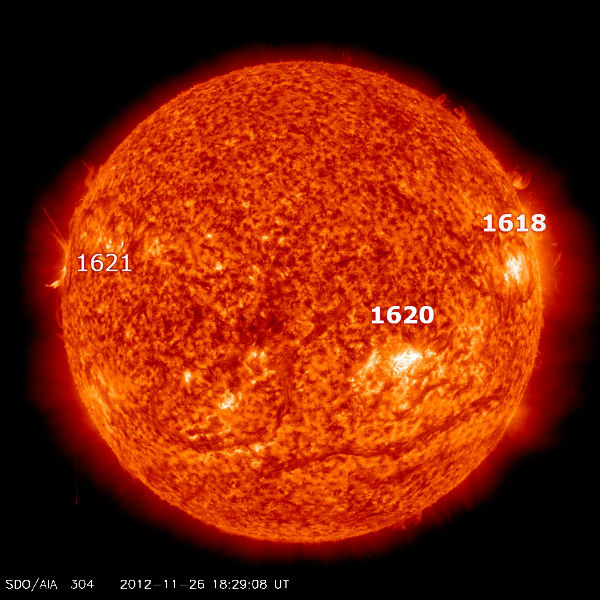 Three largest sunspots seen by SDO's AIA 304 on November 26,2012 (Courtesy of NASA/SDO and the AIA, EVE, and HMI science teams/caption:TW)

Strong magnetic flux emergence that takes place in the  AR 1620 since yesterday afternoon will probably lead to an M-class flare. A proton event is possible in case of a strong flare either from AR 1618 or 1620 due to their position in the western solar hemisphere. If any strong flare with CME ejecta will occur today, it would be Earth-directed. 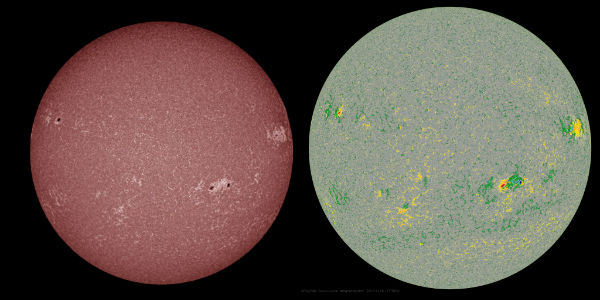 AR 1620 is fast-growing sunspot, which reached size of more than six planet Earths. And, yesterday was barely visible. Watch the animation bellow recorded by NASA's Solar Dynamics Observatory, showing the sunspot's rapid growth in a period of less than 20 hours on Nov. 25-26: 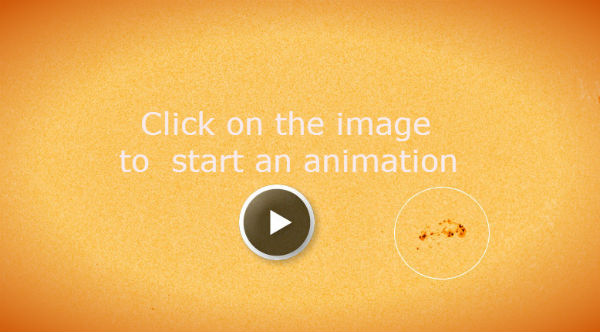 (Courtesy of NASA/SDO and the AIA, EVE, and HMI science teams)

A possibly Earth-directed CME was detected this morning originating from the filament channel right to the south AR 1620. It was not a halo CME according to the SOHO/LASCO data. STEREO Ahead COR2 data indicate a low-speed of this CME (around 300 km/s), so we expect at most a shock arrival at the Earth without any significant geomagnetic disturbance as a result.

The Earth is currently in the sheath flow after the shock arrival this morning detected at 04:38 UTC by ACE and at 04:32 UTC by SOHO/CELIAS. The interplanetary magnetic field (IMF) magnitude in the sheath flow decreased from moderately high values (around 10 nT) to the current values around 7-8 nT, and the IMF is directed predominantly northward, so the geomagnetic conditions stayed on the quiet to unsettled level up to now. The geomagnetic activity will stay at the quiet to unsettled level in the coming hours.

Stay tuned and watch for solar activity in real-time via our Space Weather Station.