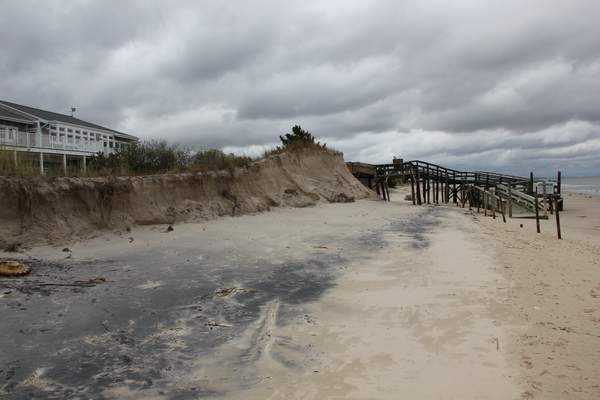 A nor’easter is predicted to potentially hit the East Coast around November 7 while it still recovering from devastation caused by Hurricane Sandy. Nor’easters usually bring massive amounts of precipitation, high winds, large waves, and marginal storm surge to coastal areas. According to Brian McNoldy, a weather researcher at the University of Miami, the new storm’s path is predicted to move from the Southeast to New Jersey. The worst impact will be the coastal flooding and beach erosion, backed up by strong winds and enhanced swells and waves, regardless of how far off the coast system could be.

Experts are concerned about further beach erosion, already devastated by Sandy. Even if the new nor’easter system wont gain the strength as Sandy, because hundreds of miles of dunes and protective seawalls tore apart or eroded after Sandy’s impact, it could still lead to flooding along lowland coastlines.

Record surge and pounding waves generated by Sandy destroyed hundreds of homes and buildings along the East Coast. Rockaway Beach (on a peninsula in New York City’s borough of Queens) was almost completely washed away and the boardwalk was destroyed. Jones Beach (a barrier island off Long Island) was overwashed by ocean. Gilgo Beach’s dune system (on Long Island) was almost destroyed, and Ocean Parkway (which runs along the southern end of Long Island) was overwashed. New Jersey’s Long Beach Island sustained severe damage, with boats and cars tossed into streets and several feet of sand piled against houses.

Hilary Stockdon, a research oceanographer with the U.S. Geological Survey in Reston, Va. said the beaches and sand dunes are the first line of defense for coastal communities against storm surge and waves. According to USGS, many of the sandy beaches along the Atlantic Coast have become increasingly vulnerable to significant impacts due to erosion during past storms like Hurricanes Ida (2009) and Irene (2011), as well as large storms in 2005 and 2007.

USGS report released in February 2011 said that East Coast beaches have been steadily eroding for 150 years. The beaches in New England and the Mid-Atlantic are losing about 1.6 feet (0.5 meters) per year on average. The worst erosion case was about 60 feet (18 m) per year at the south end of Hog Island, in southern Virginia.

Sandy’s late October arrival also increased coastal vulnerability by removing sand that had been naturally stored offshore for summer beach replenishment. During the winter, sand is stored in sandbars and comes back in the summer. 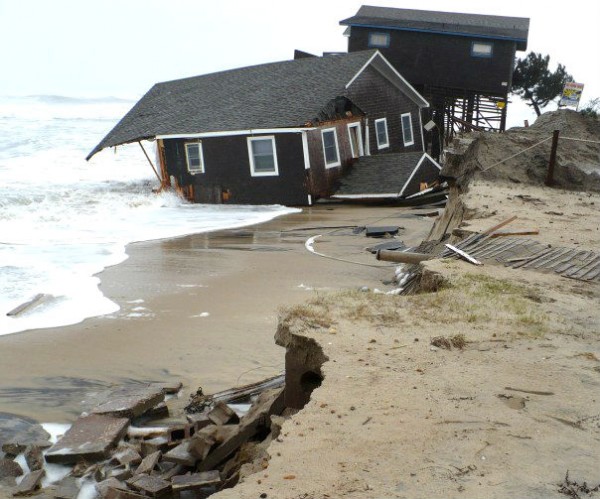 A nor’easter is a type of macro-scale storm along the East Coast of the United States and Atlantic Canada. This type of storm has characteristics similar to a hurricane. More specifically it describes a low-pressure area whose center of rotation is just off the East Coast and whose leading winds in the left forward quadrant rotate onto land from the northeast. The precipitation pattern is similar to that of other extratropical storms. Nor’easters usually cause severe coastal flooding, coastal erosion, hurricane force winds or blizzard conditions, usually accompanied with very heavy snow or rain, depending on when the storm occurs.

Nor’easters can be devastating and damaging, especially in the winter months, when most damage and deaths are cold-related, as nor’easters are known for bringing extremely cold air down from the Arctic air mass. Nor’easters thrive on the converging air masses – the polar cold air mass and the warmer ocean water of the Gulf Stream.

The low enhances the surrounding pressure gradient, which acts to spiral the very different air masses toward each other at an even faster rate. The greater the temperature differences between the two air masses the greater the turbulence and instability, and the more severe the storm can become.

Biologists at the Woods Hole Oceanographic Institution on Cape Cod have determined Nor’easters are an environmental factor for red tides of the Atlantic coast.