A new study shows that the 2011 La Nina was so strong that it caused global mean sea level to drop by 5 millimeters (0.2 inches).  This occurred concurrently with the La Nina phase of the El Nino-Southern Oscillation (ENSO) which involves a shift in ocean surface temperatures in the tropical Pacific and changes in precipitation patterns around the world. The change in sea level during the La Nina is due to water mass temporarily shifting from oceans to land as precipitation increased over Australia, northern South America, and Southeast Asia, while it decreased over the oceans.

Satellite data from the GRACE satellites how that since the early 1990s, sea level has been rising by about 3 millimeters (0.1 inches) per year. GRACE measures ocean mass, as well as ocean temperature data from floating sensors and rainfall data. Previous studies have shown that strong El Nino events can increase sea level temporarily. Rising sea level is already affecting coastal populations and most climate models predict that sea level will generally continue to rise as Earth’s climate warms.

The extremes of this climate pattern’s oscillations, El Niño and La Niña, cause extreme weather (such as floods and droughts) in many regions of the world. Developing countries dependent upon agriculture and fishing, particularly those bordering the Pacific Ocean, are the most affected. 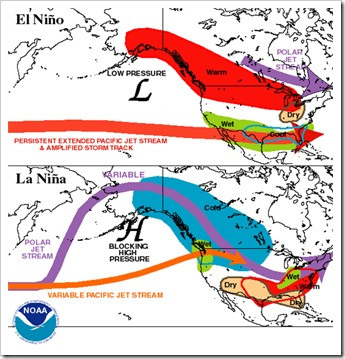