A powerful Nor'easter is expected to develop off the Mid-Atlantic coastline on Friday, January 28, 2022, before impacting eastern parts of the Northeast and New England over the coming weekend. Numerous hazards are likely from heavy snow, with significant accumulations across eastern Long Island/New England, to gusty winds and coastal issues.

A rapidly strengthening Nor'easter is forecast to move up the East Coast on Friday night and churn off the coast of Cape Cod by Saturday night.

Light snow is expected to initially overspread much of the Mid-Atlantic and Carolinas Friday night into Saturday morning, with overall snowfall amounts under 8 cm (3 inches), NWS forecaster Snell noted.1

Meanwhile, moderate-to-heavy snow is possible by Saturday morning along coastal sections of the Mid-Atlantic and Northeast, as well as New England.

Snow is forecast to continue across this region into Saturday night, as well as the potential for increasing wind gusts.

Here, total snowfall amounts may add up to over 50 cm (20 inches) by the time the system exits on Sunday.

The greatest uncertainty with the snowfall forecast lies along the I-95 corridor from Richmond, Virginia to Hartford, Connecticut, where the western edge of the highest potential snowfall amounts exist.

The gradient between little snowfall to over 15 cm (6 inches) will likely be very tight. Therefore, any slight shift in the current forecast can have drastic effects on potential impacts. 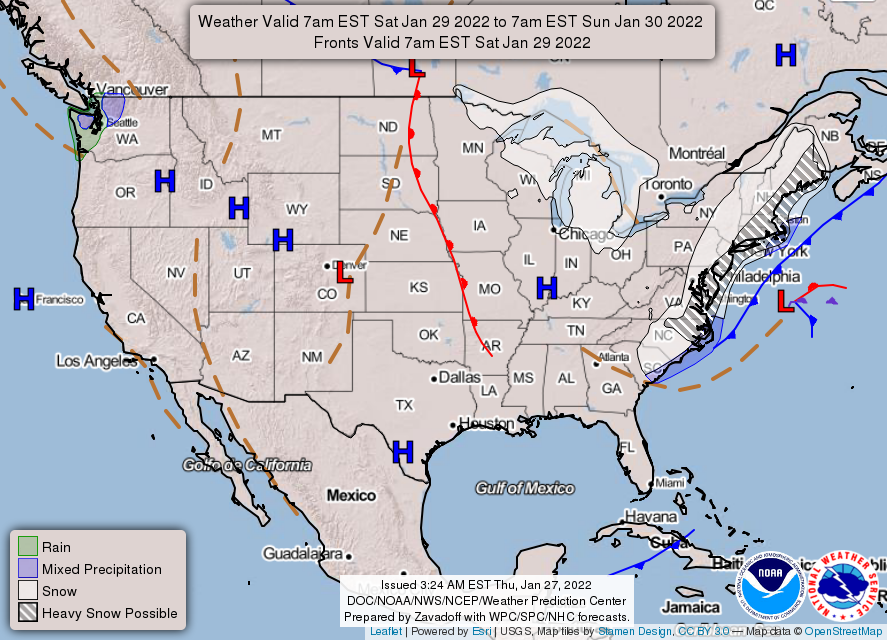 Accuweather is describing the storm as a 'blockbuster nor'easter.'

"Everything is on the table with this storm," their Chief On-Air Meteorologist Bernie Rayno said.2

As the storm quickly strengthens, it will create hurricane-force winds across parts of eastern New England, raising concerns for significant blowing and drifting of snow, reduced visibility, power outages and blizzard conditions. Along the coastline, flooding and beach erosion will be a serious threat, especially in eastern Massachusetts.

"Winds will become a major problem. This could be a real damaging storm," Rayno said.

"It is not out of the question for the blizzard to climb into the top-five biggest snowstorms to impact Boston, and it could be the biggest to hit Beantown in January."

Behind the upcoming Nor'easter, very cold wind chills will enter much of the Northeast and Mid-Atlantic throughout the weekend. This could be potentially hazardous for areas that experience power outages.

The storm will move over the Canadian Maritimes after impacting the United States and then hit southern Greenland.