Dust from Sahara traversed an entire ocean in July 2012. A dust plume extended across the Atlantic Ocean toward the Caribbean Sea and Florida. We reported already about dusty clouds over Florida and now we bring you color-coded map, made from data collected by the Ozone Mapper Profiler Suite (OMPS) on the Suomi National Polar-orbiting Partnership (S-NPP) satellite posted on Earth Observatory website. 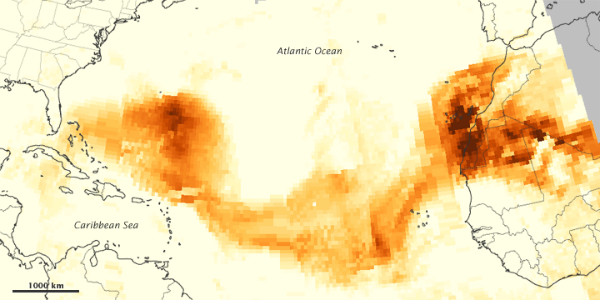 The dust followed a southward-sweeping arc over the ocean, and remained relatively thick northeast of the Caribbean islands. In the Western Hemisphere, Saharan dust has costs and benefits. Heavy dust transport to the region has coincided with coral declines, yet without regular dustings, some Caribbean islands would be barren rocks devoid of soil. Saharan dust also provides soil to the Amazon Rainforest.

For residents of southern Florida, dust from the Sahara can aggravate breathing difficulties. In July 2012, National Weather Service meteorologists warned that people with respiratory problems should take precautions, but explained that the dust transported across the Atlantic Ocean typically remains 1,500 to 1,800 meters (5,000 to 6,000 feet) above ground.