A new study has found that massive volcanic eruptions that took place over the past 70,000 years in Nicaragua could have injected enough gases into the atmosphere to temporarily thin the ozone layer. The study also concluded that if such an event took pace today, the amount of gases released could equal twice the amount of ozone-depleting halogen currently released into the stratosphere by manmade emissions. If bromine and chlorine reach the upper levels of the atmosphere, they have a high potential of depleting the ozone layer.

Taking an average from 14 Nicaraguan eruptions, Krüger and her colleagues found bromine and chlorine concentrations in the stratosphere jumped to levels that are equivalent to 200 % to 300 % of the 2011 concentrations of those gases. The Upper Apoyo eruption 24,500 years ago, for example, released 120 megatons of chlorine and 600 kilotons of bromine into the stratosphere.

Researchers analysed gases that had been trapped in minerals crystallizing in the magma chambers and estimated the amount of gas within the magma prior to the eruptions. Previous studies have estimated that in large, explosive eruptions — the type that sends mushroom clouds of ash kilometers high — up to 25 % of the halogens ejected can make it to the stratosphere.

Volcanic sulfate aerosols alone can lead to an ozone increase — if chlorine levels are at low, pre-industrial levels. But bromine and chlorine are halogens, gases whose atoms have seven electrons in the outer ring. To reach a stable, eight-electron configuration, these atoms will rip electrons off of passing molecules, like ozone. So when an eruption also pumps bromine and chlorine levels into the stratosphere, the ozone-depleting properties of the gases together with aerosols is expected to thin the protective layer.

Because the effects are in the stratosphere, where the volcanic gases can be carried across the globe, eruptions of tropical volcanoes could lead to ozone depletion over a large area, Krüger said, potentially even impacting the ozone over polar regions. 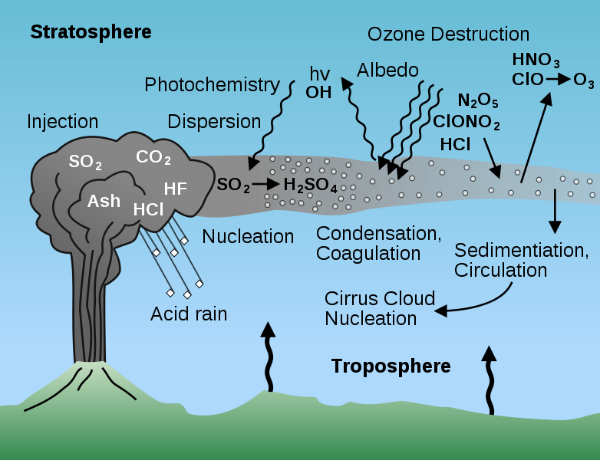 Volcanic gases include a variety of substances given off by active (or, at times, by dormant) volcanoes. These include gases trapped in cavities (vesicles) in volcanic rocks, dissolved or dissociated gases in magma and lava, or gases emanating directly from lava or indirectly through ground water heated by volcanic action.

The abundance of gases varies considerably from volcano to volcano. Water vapor is consistently the most common volcanic gas, normally comprising more than 60% of total emissions. Carbon dioxide typically accounts for 10 to 40% of emissions.

Indonesian Sinabung volcano started erupting at 18:58 UTC on August 7, 2020, for the first time since June 2019. Authorities are urging residents and tourists to stay outside a 3 km (1.8 miles) radius from the crater. The Alert Level remains at III (Siaga/Alert)....