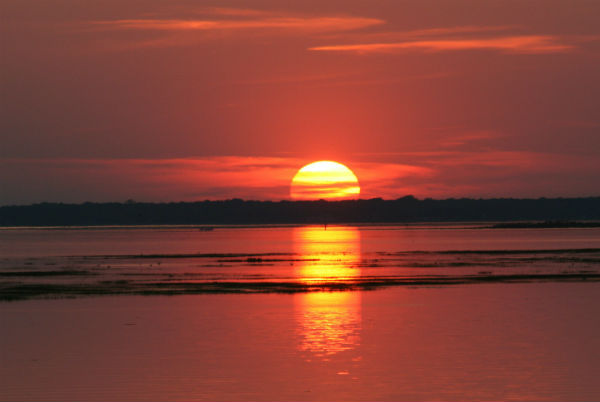 According to experts from AccuWeeather.com, much of Europe will be slightly warmer than normal this summer with the core of summer heat across southeast Europe into Ukraine. This will result in temperatures closer to normal in far western Europe. The overall positioning of the jet will allow a number of storms to move into western Europe or be deflected into Scandinavia this summer. As a result, much of western Europe and Scandinavia will have near to above normal rainfall from June to August.

Eastern Europe and western Russia will see longer and more intense spells of heat with notable heat waves from late June and into August.

Soil moisture levels will be adequate to excessive over western Europe this summer will also tend to be a limiting factor for excessive heat. The wetter forecast for Spain and France this summer is a far cry from last summer where many of these areas received only 30-60% of normal rainfall. 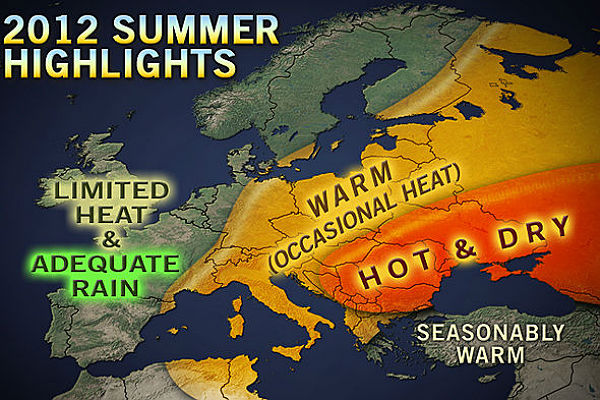 Above average temperatures are expected for the UK this summer with near normal precipitation totals. There is potential for some mid-July heat during the Olympic games in London. Last summer, London saw 202 mm (7.96 inches) of rainfall compared to their 160 mm (6.30-inch) average. Rainfall should be close to average this summer.

Spain had only 30% of normal rainfall last year and will benefit from closer to average totals this summer.

Italy should see relatively normal temperatures throughout the summer, with occasional hot days for the country.

France should have a typical precipitation average this summer, after last year’s extreme drought. Toulouse only received 60 mm (2.36 inches) last year compared to an average of 147 mm (5.77 inches). The normal levels they will receive this summer will be quite beneficial as a whole.

This summer, Greece will likely be much warmer than usual. Athens was above average last summer. Precipitation was 15 mm (0.59 inches) last year compared to a 27 mm (1.07 inch) average. Precipitation is expected to be below average this year, but closer to normal than in 2011. But it is likely the intense swing that will be most notable. 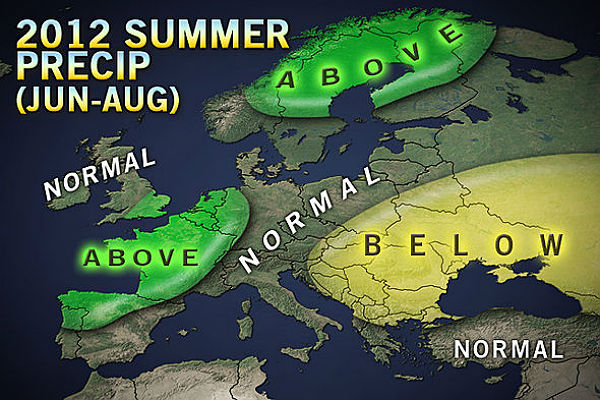 Eastern Europe into western Russia will be open to longer and more intense spells of heat this year. Last year, Warsaw experienced some very dramatic weather with an average temperature above the seasonal average and an astronomical 420 mm (16.54 inches) of rain. The average is 215 mm (8.47 inches) for the summer season, which they may fall just short of this year.

Moscow was extremely hot last summer, placing well above average. This summer’s heat should be much less severe and closer to normal. The extreme temperatures in summer 2011 were the cause of many fires in western Russia. It is not expected that this will be an issue this summer.

However, the dry forecast across Ukraine and western Russia is a marked contrast to last summer, when these areas received 100-150% of normal rainfall. The ridge near the Black Sea will likely limit rainfall across southeast Europe eastward to southwest Russia and the Volga Valley with dryer than normal conditions likely over these areas. This could cause drought, crop stress and crop quality concerns for these areas, especially later in the season. 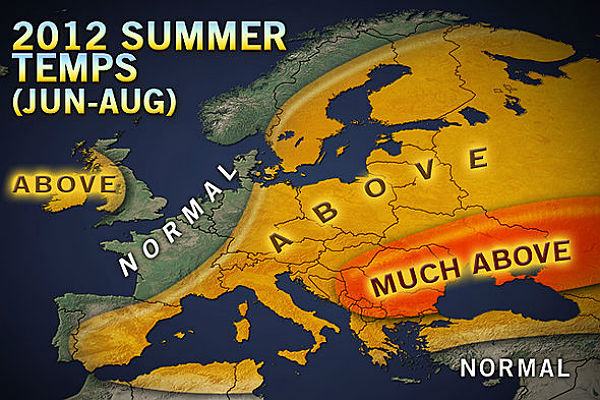