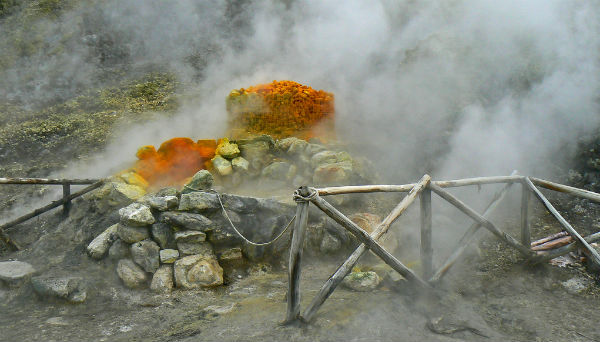 The office of Naples mayor Luigi de Magistris has approved the drilling of a pilot hole 500 meters deep into the heart of a “supervolcano” in southern Italy.

With a history of massive volcanic eruptions and ongoing deformation, this densely urban area including the city of Naples is exposed to a very high volcanic risk. Campi Flegrei caldera is a geological formation just a few kilometers to the west of Naples that formed over thousands of years following the collapse of several volcanoes. Researchers believe that if it erupted, Campi Flegrei could have global repercussions, potentially killing millions of people and having a major effect on the climate. Moderate to small eruptions from such calderas represent a major risk as well, particularly in urban areas such as wider Naples region which counts more than 3 million people.

The project for development of geothermal energy has a precedent only in Iceland. If the drill hit an unexpected hydrothermal pocket it could cause explosions. Noxious gases such as hydrogen sulfide could also escape, possibly causing explosions as they escape and even triggering seismic activity. Or the gases could poison the topsoil. The worst-case scenario is that a shock to the Campi Flegrei system would set off a chain reaction that ended in an earthquake or even a full-on volcanic eruption. Similar disasters have happened before: In 2006, a scientific drilling project on the Lusi volcano in Indonesia triggered an eruption that killed 13 people and displaced 30,000.

Project coordinator Giuseppe De Natale of Italy’s National Institute of Geophysics and Volcanology said that drilling the pilot well should start within a few months and that a second well, 3.5 kilometers (2,2 miles) deep, should then follow. First idea was to drill 4 km (2,5 miles) deep well in the area of the caldera late in 2009 but scientific community expressed concerns about the risks and the drilling was put on hold by Rosa Russo Iervolino, the mayor of Naples at the time. Scientists are interested in gradual uplift and descent of Earth's surface resulting from movement of magma inside a caldera, also known as bradyseism. They want to find out whether there is a connection between this phenomenon and volcanic eruptions. The study should provide information that could help to extract geothermal energy from the volcano in the future.

Large collapse calderas represent an extremely explosive type of volcanism with potential for global impact. Although very rare, such super-eruptions represent a serious threat to mankind. Scientist still don't fully understand the link between shallow fluids and magmatic systems that generate unrest and feed extremely explosive eruptions. They still need to better assess the high volcanic risk in the area and develop best strategies for risk mitigation in Campi Flegrei and in similar environments. New technologies for environmental monitoring are necessary for the exploitation of geothermal energy. 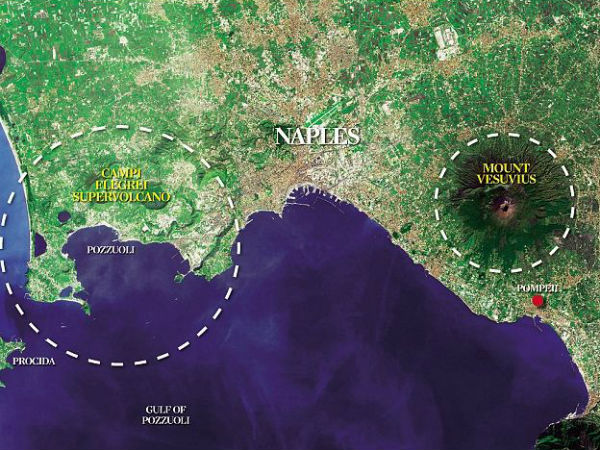 Benedetto De Vivo, a geochemist at the University of Naples, told Science in 2010 that the drilling might cause seismic activity or generate an explosion if it allowed the high-pressure supercritical fluids, expected to exist at depths of about 3 kilometers or more, to come into contact with magma inside the caldera.

De Vivo added that he didn’t understand why the well was to be located on the grounds of the former Bagnoli steel mill, on the western outskirts of Naples, and not further west. Collaboration member Ulrich Harms of the German Research Centre for Geosciences in Potsdam said at the time that there is no risk  if the drilling is done in a controlled way but still, the volcanic risk cannot be excluded. 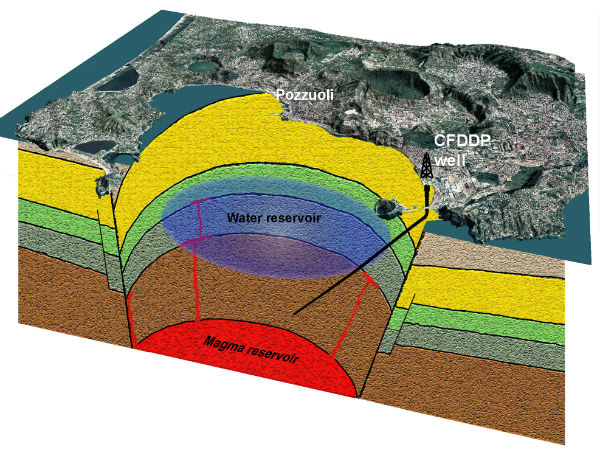 Co-sponsored by the European Union, a coalition of scientists from 18 countries plans to drill deep into the volcano and implant sensors that will measure changes in temperature, the movement of magma, and seismic activity. The first phase of the project involves drilling a 500 meters (1,640-foot) borehole to study the composition of the rock; phase two, drilling the narrow 4 km (2.5 miles) master hole. Data collected from sensors that the scientists place at the bottom of those holes will make it possible to map the volcano’s underground geometry with unprecedented precision. It could also give local authorities early warning if an eruption becomes imminent.

The area of ​​Campi Flegrei is home to a moderate seismicity, which generally occurs in swarms. Campi Flegrei in Southern Italy is a typical example of a collapsed caldera whose surface is partially (60 % submerged). It has the highest recorded ground movements not immediately followed by eruptions. This area has the longest historical record of ground movement associated with volcanic activity, as revealed by marine incrustations and molluscs on the Roman and medieval buildings. The secular deformation of this area is subsidence, at a rate of about 1.5–1.7 cm per year, with some periods of large and faster uplift. Historically, three such uplift periods are evident. The first one occurred from 650 to 730 AD and the second from 1441 to 1538 while  the third one is still in progress following the latest eruptions since 1969. This recent period is characterized by episodes of very fast deformation rates, followed by periods of minor subsidence. The total uplift from 1969 to 1984 was 3.5 m, while the uplift rate in the period 1983–1984 exceeded 1 m per year. A relatively fast subsidence was recorded after 1985 until the end of 2004; since late 2005 a new uplift episode is in progress, currently reaching 4 cm, half of which in the last two months of the record. 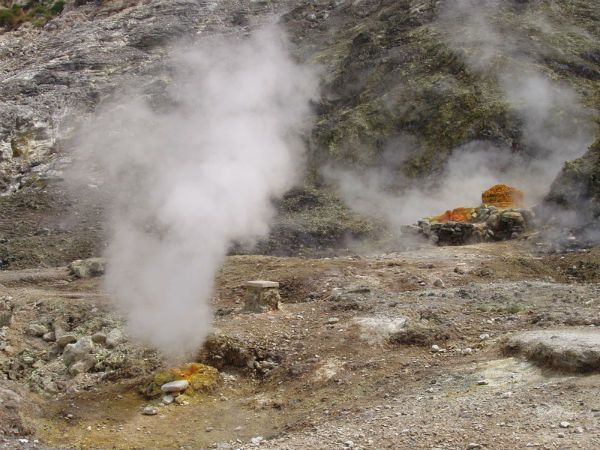 The volcanic area of ​​Campi Flegrei has been characterized by intense deformation, with strong variations of the ground level. The most recent manifestations of these phenomena are represented by two crises of the '70-'72 bradisism and '82-'84, during which there was a lifting up of over 3 m. At this crisis there was an intense seismic activity. In particular, the recent crisis has been accompanied by more than 10,000 earthquakes, often in swarms. In these periods of rapid deformation of the soil was also observed an increase in the area of ​​the Solfatara hydrothermal activity, in which there is an extensive field of fumaroles.

Since 2004, the area shows a trend of slight lift. The minor episodes were accompanied by lifting low seismicity, represented by swarms of small earthquakes. As of October 2004 a period of slow lifting began. In May 2005 it reached a value of about 11 mm. In the period from May to October 2005 there was a stagnation of the upwelling of the soil, while from November 2005 to March 2006 there was a new lift of 13 mm. 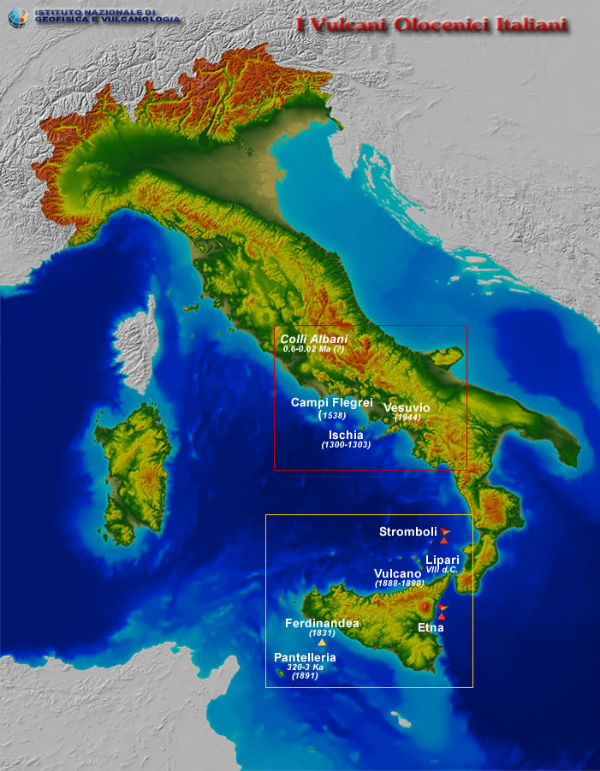