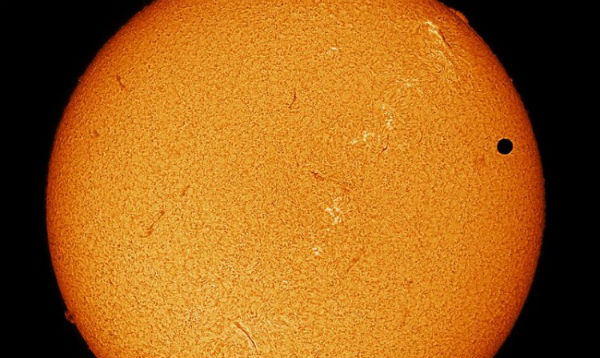 The upcoming transit of Venus will occur on June 5th in the Western Hemisphere and on June 6th in the Eastern Hemisphere. We bring you some facts and tips on how to make your skywatching more memorable.

Why this is a rare event?

The orbits of Mercury and Venus lie inside Earth’s orbit, so they are the only planets which can pass between Earth and Sun to produce a transit. This transit is one of the rarest sights in astronomy. For a transit of Venus to occur, Venus has to move directly between Earth and the Sun so that an imaginary observer looking “down” on the solar system from above would see the three bodies form a perfectly straight line. When this happens, astronomers say that Venus came to inferior conjunction. Venus orbits the Sun faster and in a smaller orbit, and it comes to these inferior conjunctions every 584 Earth days.  Venus’s orbital plane is tipped 3.4 degrees relative to Earth’s orbital plane. The planes cross each other at two points called nodes. To get a transit, Venus has to be at inferior conjunction at the exact same time it’s at a node. Two events must occur simultaneously, and it’s rare to have such perfect synchrony. Normally, Venus’s inclined orbit means it is located “above” or “below” the Sun when it comes to inferior conjunction. 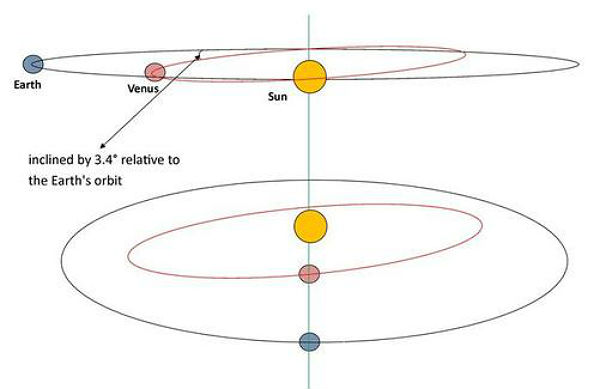 Earth’s orbit around the Sun is slightly elongated (iseccentric), deviating from a perfect circle by about 3 percent, while Venus’s orbit is very close to being a perfect circle. For the past few centuries and the next few centuries, these perfect alignments occur at intervals of 8, 105½, 8, and 121½ years. It is a 243-year cycle, with pairs of transits separated by only 8 years, but with each pair separated by more than a century. Venus crosses the southern part of the Sun’s disk in the first transit, and the northern part in the second transit. This time, Venus will cross the northern part of the Sun’s disk on June 5th/6th.

Venus moves from being an evening “star” to being a morning “star” by passing in front of the Sun on June 5.  Because of the International Date Line, this event will occur on Wednesday June 6 in Asia, Australia, Africa, and Europe. During this transit, an observer on Earth can track the planet Venus as it crosses the disc of the Sun. In North America the best time will be in the hours before sunset on Tuesday afternoon, June 5th. In Europe, Africa, and Australia, Venus will be in transit as the sun rises on Wednesday morning. In most of Asia and across the Pacific Ocean transit will be visible during all Wednesday. 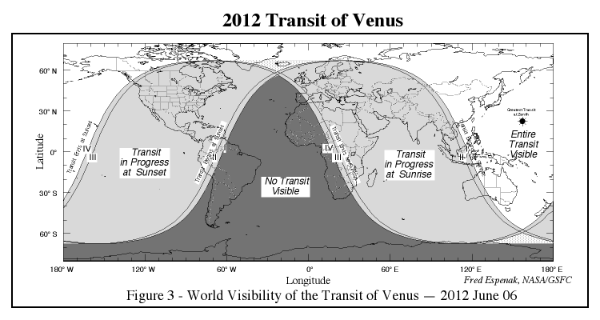 The transit occurs from about 22:00 June 5 to 05:00 June 6 (UTC; subtract 4 hours for Eastern US time). The exact time depends on where you are on Earth. You can see the time of transit in your area by clicking HERE. 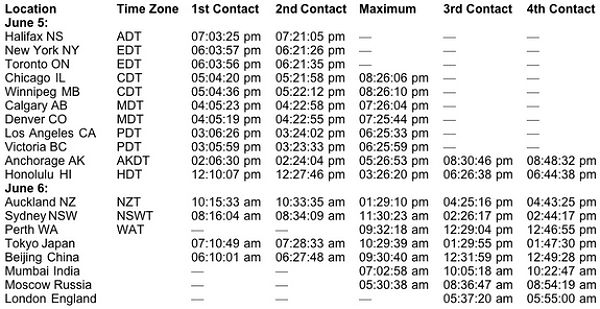 On June 4th we will have the full moon. Night before Venus crosses the face of the sun, full moon dips through Earth’s shadow in a partial lunar eclipse. 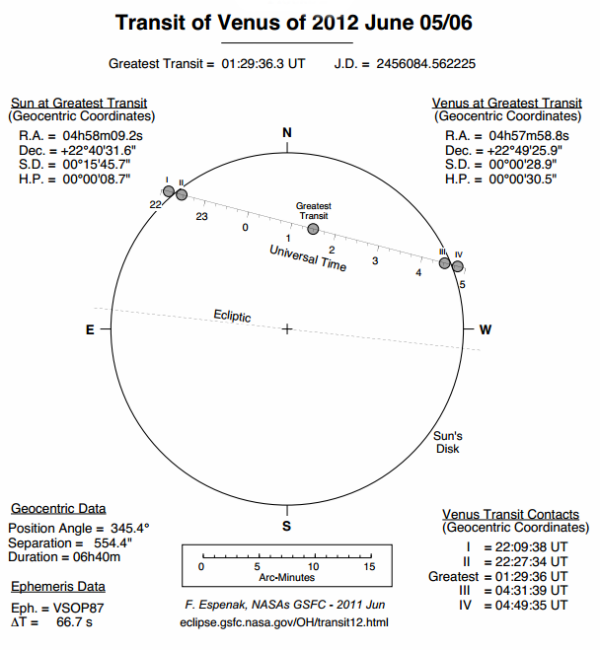 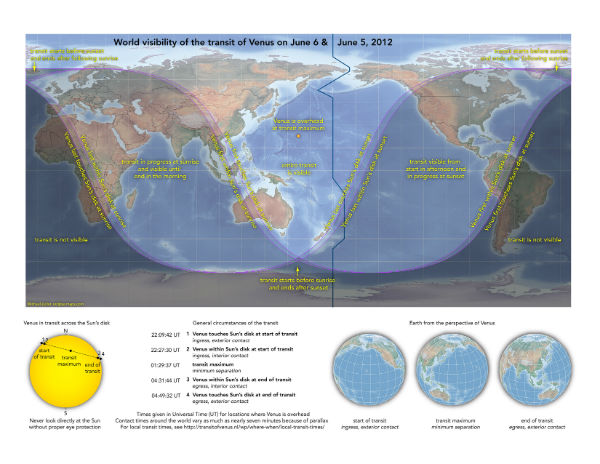 There are only two safe ways to observe the transit of Venus. You can use dense filter for watching in sun direction. The only safe filters are a #14 welder’s glass or “eclipse shades glasses” available only from telescope stores and astronomy clubs. They are cheap to buy.

You can make “pinhole camera.”  It can be made from a large cardboard box by making a small hole in one end of the box, about a millimeter or two in diameter. This hole acts as the lens. Place a white sheet of paper in the opposite end to serve as the viewing screen. Place the box over your head resting on your shoulders, and watch the transit on the screen. Unlike an eclipse the shadow of Venus is small and may be hard to see that way.

For those using binoculars or a small telescope, you must be aware that there is no substitute for a proper full-aperture solar filter. You must block the sunlight from entering the telescope because you run the risk of concentrating the sun’s light. Those of you who have telescopes which allow you to view the sun in hydrogen alpha light, it should be possible to see Venus silhouetted against prominences and the corona, before it moves in front of the chromosphere. If you are observing the transit with a telescope, there’s an interactive phone app that will allow you to time various parts of the transit, and which will collect the data into a repository and map it.

For those observing by unaided eye, Venus will look like a tiny round black disk, but still large enough to be clearly visible. The Sun is 115 times wider than Venus, but Venus is much closer to us than the Sun is (about 42 million km versus 150 million — 25 versus 93 million miles). Because of that, Venus will look to be about 1/30th the Suns diameter, just big enough to see as a tiny disk by eye.

Just after second contact and just before third contact, when a dark ligament appears to join Venus to the dark sky, an interesting  illusion occurs, so-called “black drop” effect.Venus can appear as a bright ring just before it enters the sun’s disk and just after it leaves. Venus has a dense atmosphere which could contribute to this effect. The Sun will probably have sunspots visible during the transit, but Venus will be darker and rounder than they are.

The Venus Express science team will be watching, and broadcasting live, from the Arctic island of Spitsbergen. NASA’s Hubble Space Telescope and Solar Dynamics Observatory will be focused on the event, as well as the European Space Agency’s Venus Express satellite in orbit around Venus and many world’s premiere telescopes.


Where to watch the transit online
New technologies, like the free Transit of Venus phone app, will allow individuals to send their observations of the 2012 transit of Venus to a global experiment to measure the size of the solar system. You can join this unique effort, spearheaded by the non-profit Astronomers Without Borders, as a supporter and a participant.

Past and future transits of Venus 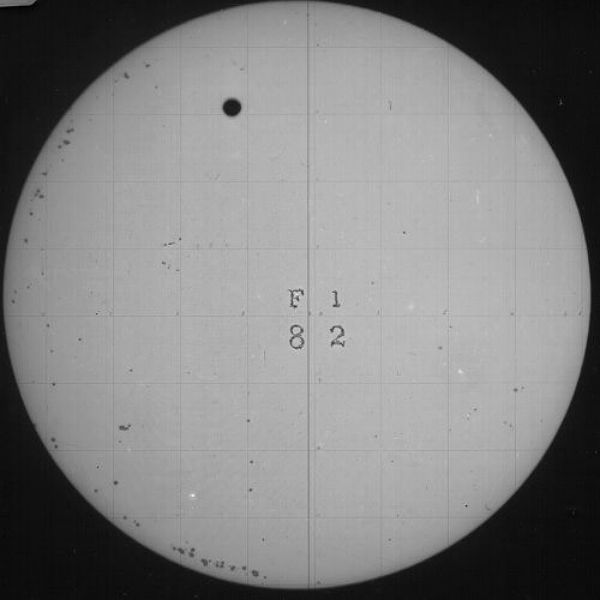 “There will be no other transit of Venus till the twenty-first century of our era has dawned upon the Earth, and the June flowers are blooming in 2004. When the last transit occurred the intellectual world was awakening from the slumber of ages, and that wondrous scientific activity which has led to our present knowledge was just beginning. What will be the state of science when the next transit season arrives, God only knows.” Astronomer William Harkness, 1882