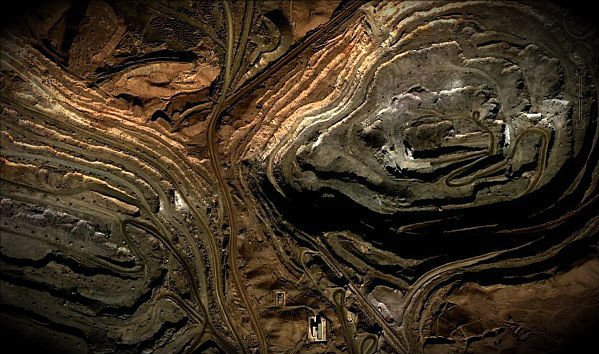 The vast majority of the rare earths on the market—96 percent—come from China. About half come from Bayan Obo (41 ° 47’N, 109 ° 55’E), the mine shown above in the Nei Mongol Autonomous Region. Such an intensive mining operation has a definite impact on the surrounding environment. According to the Chinese Society of Rare Earths, 9,600 to 12,000 cubic meters (340,000 to 420,000 cubic feet) of waste gas—containing dust concentrate, hydrofluoric acid, sulfur dioxide, and sulfuric acid—are released with every ton of rare metals that are mined. Approximately 75 cubic meters (2,600 cubic feet) of acidic wastewater, plus about a ton of radioactive waste residue are also produced. 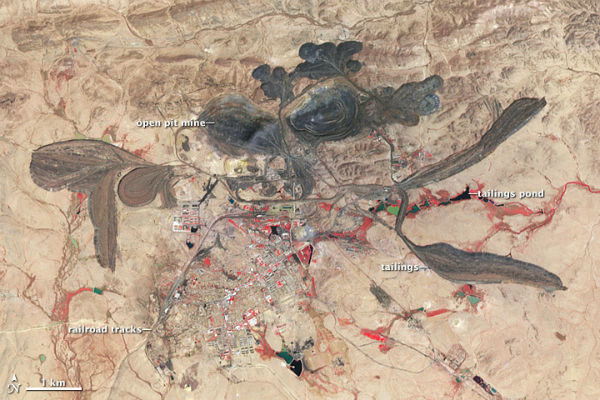 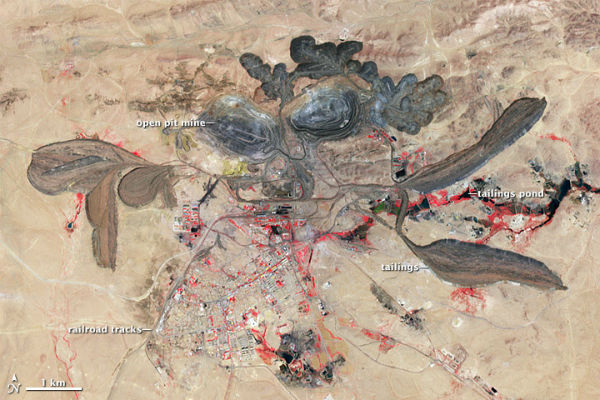 There are 17 rare earth elements (REEs), 15 within the chemical group called lanthanides, plus yttrium and scandium. The lanthanides consist of the following: lanthanum, cerium, praseodymium, neodymium, promethium, samarium, europium, gadolinium, terbium, dysprosium, holmium, erbium, thulium, ytterbium, and lutetium. Rare earths are moderately abundant in the earth’s crust, some even more abundant than copper, lead, gold, and platinum. While more abundant than many other minerals, REEs are not concentrated enough to make them easily exploitable economically. The United States was once self-reliant in domestically produced REEs, but over the past 15 years has become 100% reliant on imports, primarily from China, because of lower-cost operations.

There is no rare earth mine production in the United States. U.S.-based Molycorp operates a separation plant at Mountain Pass, CA, and sells the rare earth concentrates and refined products from previously mined above-ground stocks. Neodymium, praseodymium, and lanthanum oxides are produced for further processing but these materials are not turned into rare earth metal in the United States. Molycorp anticipates reopening its Mountain Pass mine (as a low-cost producer) in 2012.

Some of the major end uses for rare earth elements include use in automotive catalytic converters, fluid cracking catalysts in petroleum refining, phosphors in color television and flat panel displays (cell phones, portable DVDs, and laptops), permanent magnets and rechargeable batteries for hybrid and electric vehicles, and generators for wind turbines, and numerous medical devices. There are important defense applications, such as jet fighter engines, missile guidance systems, antimissile defense, and space-based satellites and communication systems. World demand for rare earth elements is estimated at 136,000 tons per year, with global  production around 133,600 tons in 2010. The difference is covered by previously mined above-ground stocks. World demand is projected to rise to at least 185,000 tons annually by 2015. Additional mine capacity at Mt. Weld Australia is expected to come on stream later in 2011, to help close the raw materials gap in the short-term. Other new mining projects could easily take 10 years to reach production. In the long run, however, the USGS expects that global reserves and undiscovered resources are large enough to meet demand. 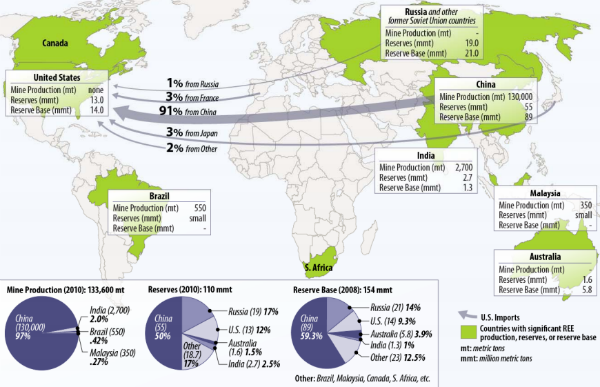 Several legislative proposals have been introduced in the 112nd Congress in the House and Senate to address the potential of U.S. supply vulnerability and to support domestic production and supply chain development of REEs because of their applications for national security/defense systems and clean energy technologies. The House Committee on Natural Resources approved H.R. 2011, the National Strategic and Critical Minerals Policy Act of 2011, on July 20, 2011. (Source: Rare Earth Elements: The Global Supply Chain by Marc Humphries, September 6, 2011)