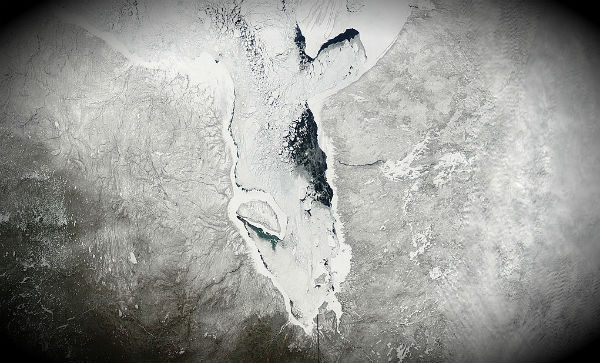 The cold waters of Hudson Bay are typically covered with ice from January to May each year and reach reaching ice-free status in mid-August, but by early April, 2012, ice breakup was well underway across the Bay. Bits of open water covered with some floating ice can be seen along the shore in many areas, particularly on the eastern side of St. James Bay, which is the southern extent of Hudson Bay, and in the Hudson Strait. The Hudson Strait lies in the northeastern section of the image, and connects the Atlantic Ocean to the Bay. Cracks and fissures can also be visualized in much of the ice on the entire eastern side of Hudson Bay. 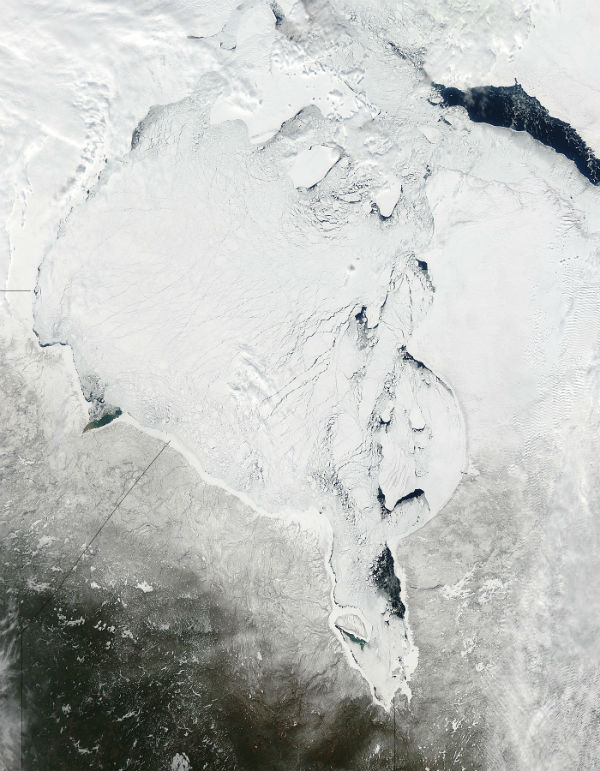 According to the National Snow and Ice Data Center, Arctic sea ice reached its maximum extent on March 18, marking the beginning of the melt season for the Northern Hemisphere sea ice. This is within the 6-week period from mid-February to the end of March which has been recorded for the beginning of melt season. Ice extent for the month as a whole was higher than in recent years, but still below average. As the melt season begins, researchers look at a variety of factors that may contribute to summer ice melt. While the maximum extent occurred slightly later than average, the new ice growth is very thin and likely to melt quickly. Ice age data indicate that despite the higher extent compared to recent years, the winter sea ice continues to be dominated by younger and thinner sea ice.

On April 9, the Canadian Ice Service released a chart that showed that the total amount of sea ice across much of Hudson Bay still remained within normal levels, but areas in eastern St. James Bay and in the Hudson Strait, ice had decreased by as much as 9-10/10, which is the maximum amount reported. In an area close to the central western shore, the ice cover had decreased by 6-8/10. 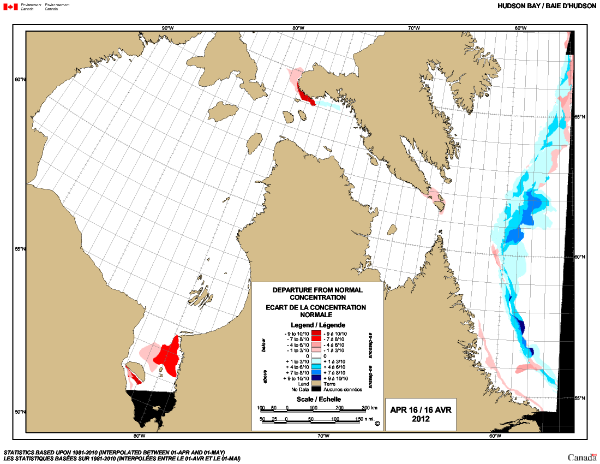 In addition, water temperatures were reported as increased throughout much of Hudson Bay. At Coral Harbour, which lies in the far north of the Bay on Southampton Island, on April 9, water temperature was reported to be 14°F higher than normal. The higher water temperature is likely hastening the onset of ice breakup, and may speed the progress of ice melt in the Hudson Bay this year. (MODIS.gsfc)