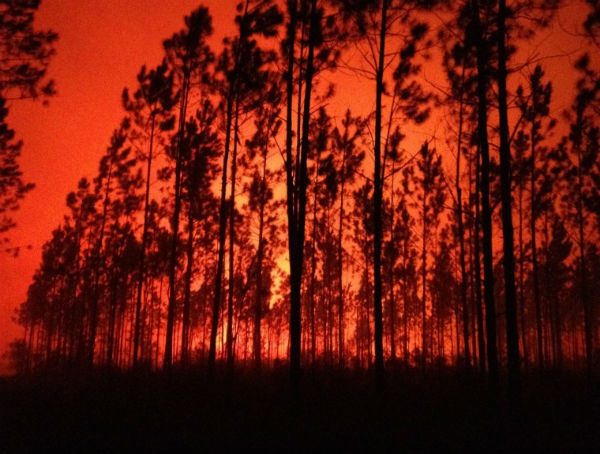 The U.S. wildfire season that typically starts in late spring has taken off this month, with crews tackling fires up and down the East Coast in recent days. The Columbia Line Fire, a large fire in Pinhook Swamp, in northern Florida, is generating a lot of smoke along the Georgia county line and has caused Smoke Advisories to be posted from Hamilton County to Jacksonville, Florida. The swamp fire has burned about 7,000 acres, and the area affected runs along the Columbia and Baker County line. New Jersey saw a new brush fire on Wednesday just off the state turnpike near the Izod Center arena. On Tuesday, crews battled brush and wildfires in several eastern states.

On April 9, 2012, the National Weather Service (NWS) issued a Dense Smoke Advisory for Columbia, Baker, Union, Bradford, and Alachua Counties. The county line wildfire in northern Columbia County will continue to send dense smoke downwind of the fire according to  NWS advisory. Dense smoke will spread south and east from northern Columbia and Baker counties as far south as Alachua County. On New York’s Long Island, two brush fires merged into one that consumed three homes and nine business properties across 1,000 acres before firefighters got the upper hand 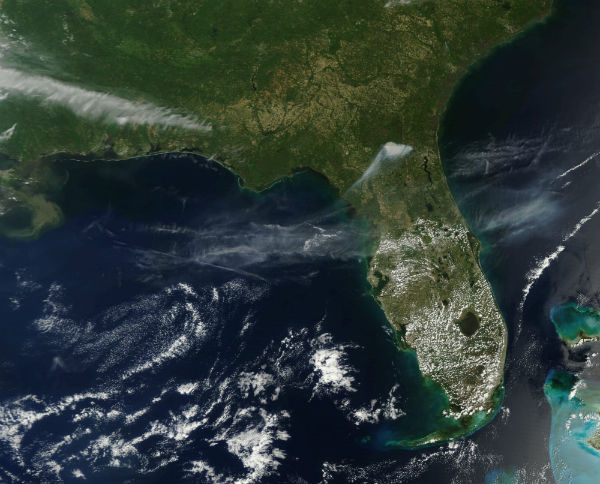 The County Line Fire in Northeast Florida has sent smoke into the outskirts of Jacksonville. The smoke elevated levels of particulate matter around and south of Jacksonville to unhealthy levels, according to AIRNow. The smog blog, a website operated by UMBC scientists, reported that the CALIPSO satellite had recorded high particulate levels around Jacksonville with its lidar instrument. Lightning sparked the fire on April 5, 2012, and it had burned a total of 25,000 square acres by April 11, 2012. Florida is typically dry in April, but an ongoing drought in the Southeast has brought exceptionally dry conditions to the area west of Jacksonville. That city has seen only 31 percent of normal rainfall so far this year, a deficit of nearly 20 centimeters (8 inches). 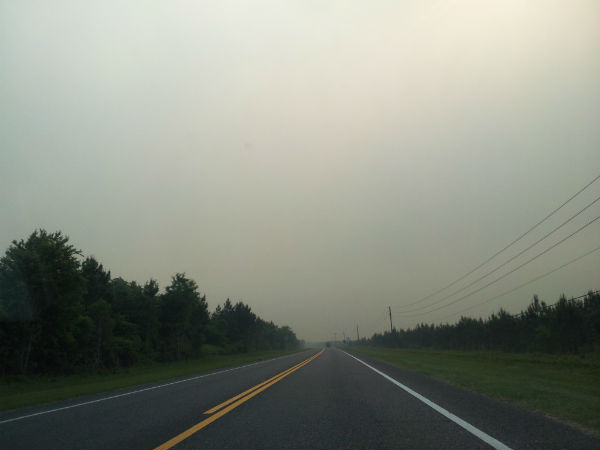 NASA’s Moderate Resolution Imaging Spectroradiometer (MODIS) instrument on the Terra satellite captured this view of the plume at 12:05 p.m. local time (16:05 UTC) on April 10, 2012. (bellow on the left) The thick and potentially hazardous plume of smoke was blowing west when the image was taken at 3:45 p.m. local time (08:45 Universal Time). Another view of the smoke—captured by a MODIS instrument on the Terra satellite a day later – showed that winds had shifted and the plume had drifted both south and north. Just west of the fire, a number of pyrocumulus clouds are visible. Large fires can rapidly heat the air above a fire, and the heated air rises with smoke until water vapor in the atmosphere condenses into a puffy cloud. In satellite imagery, pyrocumulus clouds appear as patches of white capping otherwise dark columns of smoke. The Moderate Resolution Imaging Spectroradiometer (MODIS) instrument on NASA’s Aqua satellite captured this view of the County Line Fire and its smoke on April 7, 2012. (bellow on the right side)

A large fire in Osceola National Forest has burned more than 10,000 acres and sent smoke wafting across Northeast Florida.  On April 9th, the National Weather Service warned Floridians that smoke would likely move east and affect the Jacksonville area, with visibility reduced to one mile (and possibly less than that) close to the wildfire. In a wildfire season forecast, the Florida Forest Service pointed out that La Niña has had a significant drying impact in recent years; it has caused near-record warmth and unusually low levels of rainfall across the state. The forest service expects that temperature and rainfall will likely return to normal levels in the coming months as the effects of La Niña dissipate. Nonetheless, forecasters expect above-normal wildfire potential through the spring. (EarthObservatory)

Twenty-five states, all east of the Rockies, posted their warmest January-March periods on record, and many Northeastern states have had their driest starts ever. Humidity also also been low, and there’s lots of fuel in the form of brush to burn. La Niña is almost assuredly coming to an end, but there may yet be some lag between the ENSO status in the tropical Pacific and weather patterns over Florida. In the immediate future, the impact of nearly two years of almost continuous La Niña conditions, along with very little tropical impact during hurricane season may result in an April that has little difference from what we have been seeing according to long-range outlook by Florida Forest Service. 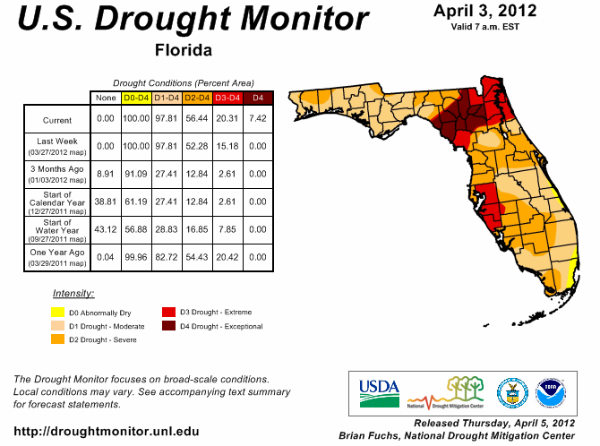 Severe to extreme drought conditions continue for much of eastern New Mexico, western Texas, parts of the upper Midwest and much of the Southeast coast according to the National Interagency Fire Center’s outlook posted on April 1. And that wasn’t a joke. Worsening drought was occurring over much of the Southwest including California and the Great Basin. They forecasted  above normal temperatures across most of the Southwest and Great Basin, and the Gulf and East coast states from Texas to Maine during May through July. 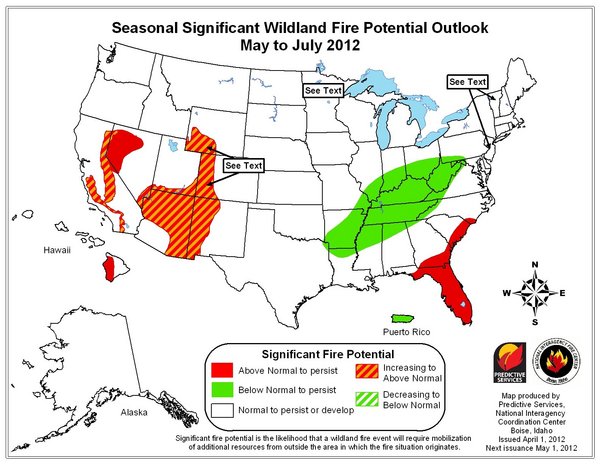 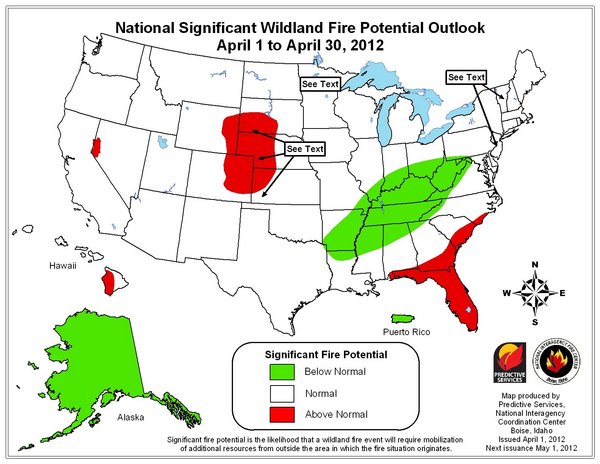 In the longer term, Florida may see temperatures and rainfall return to levels closer to climatological normal. However, it bears noting that this time of year generally tends to be warm and rather dry before summer rains kick in. This scenario assumes a gradual decline in La Niña towards neutral conditions. There is a potential for a fairly quick shift through neutral to the opposite phase, El Niño. Though the impact of ENSO-phase on Florida weather is lessened in the summer, this potential does create uncertainty in the seasonal outlook. 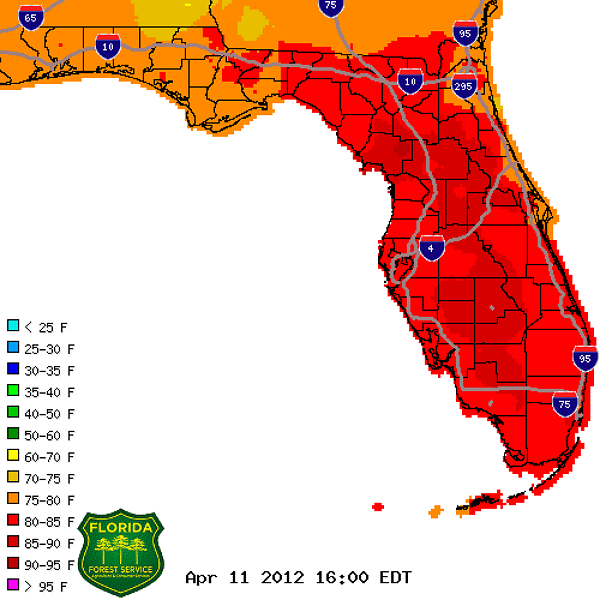 Ultimately, Florida will need significantly above normal rainfall to help combat the long-term drought, which would be best – or perhaps only – provided by a tropical impact of some sort. Ideally, of course, this would be from indirect impacts or a weak storm. Activity in the upcoming Atlantic hurricane season will also be influenced by the ENSO phase, with less activity likely should El Niño develop. Less hurricane activity may imply less threat for Florida. However, total basin activity is not directly associated with threat of impact for Florida. The past two hurricane seasons have been very active, with essentially no impact on Florida. On the flip side, 1992 was not a very busy season, which is of little comfort to those who lived in South Florida at the time.