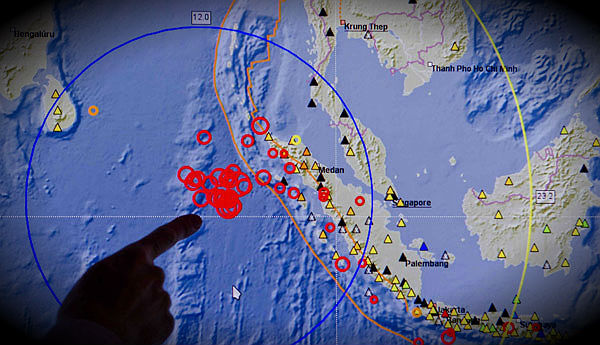 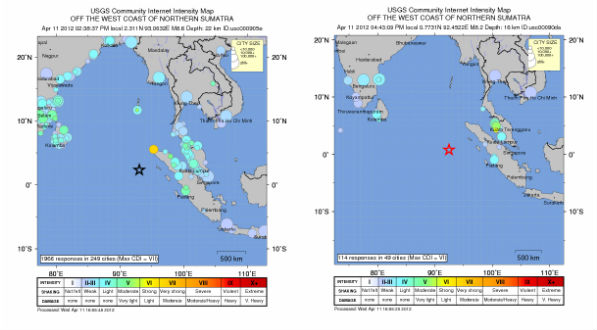 There were some reports of damage in northern Sumatra. So far there are no reports of seriously injured or killed people. The first 8.6-magnitude quake off Aceh province spawned a wave around 80cm high but caused no serious damage.

Instead of occurring at a plate boundary along an area called a subduction zone, where one tectonic plate is diving beneath another, this earthquake occurred in the middle of an oceanic plate, where the faults in the crust essentially moved from side to side instead of up and down. These sorts of events are called strike-slip earthquakes. Although they are sometimes produced by landslides on the seafloor, significant tsunamis are typically created by subduction earthquakes, when one massive oceanic plate suddenly lurches deeper beneath another plate, shoving up a huge section of the seafloor. That displacement of the ocean floor also displaces ocean water

The earthquake off the coast of northern Sumatra in Indonesia began with a sudden shift in a strike-slip fault, a line of weakness in the sea floor where two huge bodies of rock can slide past one another. Unlike the earthquake that triggered the devastating 2004 tsunami in the region, the sea floor moved sideways instead of vertically, meaning it displaced less water and did not send giant waves around the Indian Ocean. The slippage occurred in a fracture in a slab of oceanic crust that is bending downwards and beneath Sumatra. The US geological survey said the main shock was magnitude 8.6, which is extraordinarily high for a strike-slip fault. Two hours after the main shock was felt, the area was hit by a magnitude-8.2 aftershock, probably caused by slippage along the same 125-mile fault. The huge release of energy redistributed stress to other weak spots in the crust, making them more likely to cause future earthquakes. 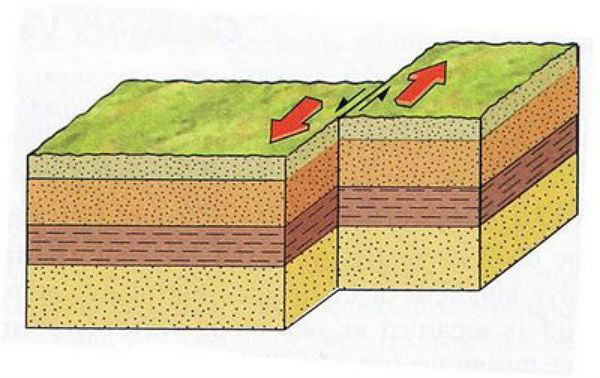 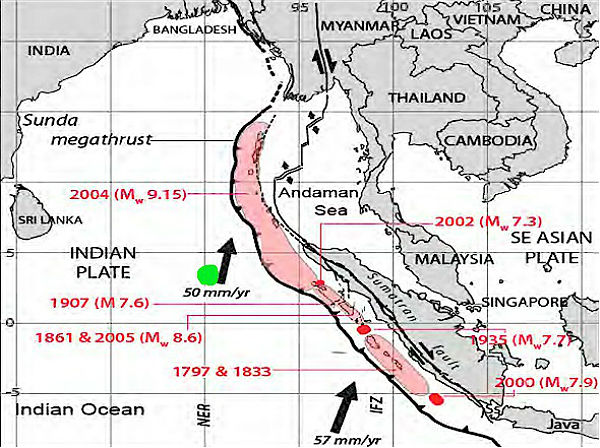 An average of 17 large earthquakes (magnitude 7 or greater) happens every year around the world since 1900, and about 15 a year since 1990.

So why was this earthquake the largest non-damaging earthquake ever measured?
a) It occurred 400km+ offshore, thus the earthquake shaking only achieved a maximum intensity of around 5.5-6 in the closest points to land, causing no discernible damage.
b) the earthquake, unlike other major M8+ earthquakes, was a strike-slip earthquake, where plates slide past one another, and not upwards or downwards. Therefore, there was not much offset on either side of the fault and thus the water volume was not significantly displaced and therefore caused NO MAJOR TSUNAMI (highest was at Meulaboh with 1.05m)
c)13 other earthquakes over Mw8 since 1900 have caused no damage, however, the Mw8.6 was the highest by Mw0.4 (around 3 times the ground motion and 7 times more energy than ever before to cause no damage!!!!)
The Mw8.2 earthquake which occurred a couple of hours later was the 3rd largest earthquake recorded to cause no damage. (Earthquake Report)

Indonesia is on the so-called Ring of Fire, an arc of fault lines circling the Pacific Basin that is prone to frequent earthquakes and volcanic eruptions. The earthquake Wednesday comes just over year after a magnitude 9 quake off the northeast coast of Japan caused a devastating tsunami.

Featured image: A scientist points at a screen at the German Research Centre for Geosciences in Potsdam that shows the epicenters of an earthquake and its aftershocks off the coast of Indonesia (Credit: IrishTimes)