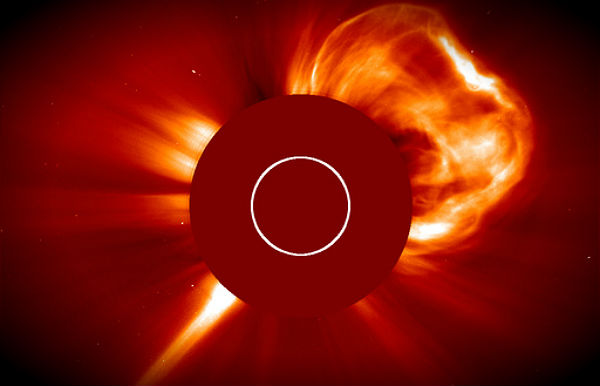 Solar maximum or solar max is the period of greatest solar activity in the solar cycle of the sun when large numbers of sunspots appear.

A solar maximum is the period when the sun’s magnetic field lines are the most distorted due to the magnetic field on the solar equator rotating at a slightly faster pace than at the solar poles. The solar cycle takes an average of about 11 years to go from one solar maximum to the next, with an observed variation in duration of 9 to 14 years for any given solar cycle.

Large solar flares often occur during a maximum. For example, the Solar storm of 1859 struck the Earth with such intensity that the northern lights could be seen as far south as Rome, approximately 42° north of the equator.The last solar maximum was in 2000.

Predictions of a future maximum’s timing and strength are very difficult. In 2006 NASA initially expected a solar maximum in 2010 or 2011, and thought that it could be the strongest since 1958.

However, more recent projections say the maximum should arrive at the end of 2012 or in February 2013.