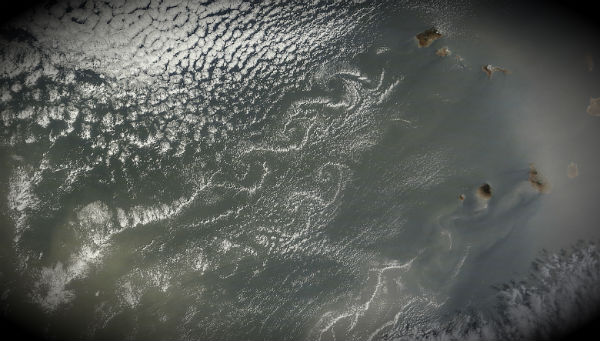 A strong Harmattan wind carried clouds of dust thousands of kilometers across West Africa and the Northern Atlantic Ocean in early February 2012. Blowing south from the Sahara desert, the dry and dusty seasonal trade wind deposited thick layers of dust on sidewalks and shop windows, and caused the grounding more than a dozen flights by February 8, 2012.

In this image bellow, white clouds float above the yellow-brown cloud of Saharan dust. In the northeast section of the image, the dust interacts with the Cape Verde Islands, which are located about 570 kilometers off the coast of West Africa. The flow of wind become disrupted as it hits the mountainous peaks, and becomes turbulent as it passes the islands. This turbulent wind flow is etched in the clouds on the leeward side of the islands, as well as in the tan airborne dust. 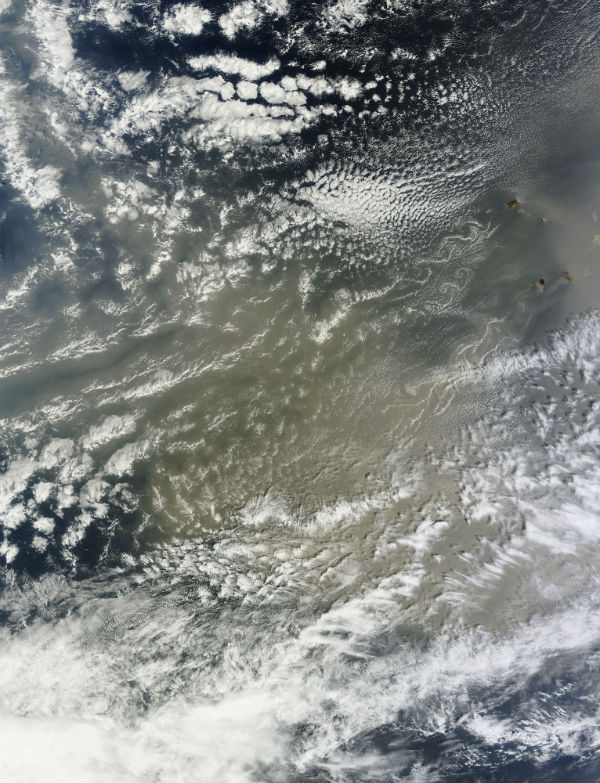 The Harmattan is a strong trade wind which arises in Sahara Desert and blows south across West Africa in the winter months (November to March). Heavy dust storms are common in the region during this time, and residents must adapt to the disruptions that come with heavy dust and sand. This storm, which began on February 6, has the distinction of being the worst sandstorm in this area in two years. (MODIS)

In some countries in West Africa, the heavy amount of dust in the air can severely limit visibility and block the sun for several days, comparable to a heavy fog. The effect caused by the dust and sand stirred by these winds is known as the Harmattan haze, which costs airlines millions of dollars in cancelled and diverted flights each year and risks public health by increasing meningitis cases. The interaction of the Harmattan with monsoon winds can cause tornadoes. Humidity drops to as low as 15 percent and can result in spontaneous nosebleeds for some. The wind can cause severe crop damage. North Africans often say that the Harmattan wind brings about bad tempers and poor decision making, as people grow irritated with the days on end of dry, dusty wind. (Wikipedia)