The Ozone Mapper and Profiler Suite (OMPS) is one of five new satellite instruments on the Suomi National Polar-orbiting Partnership (NPP) satellite. OMPS  is sending back detailed information about the atmospheric gas that shields life from harmful levels of the Sun’s ultraviolet radiation and the health of Earth’s ozone layer.  OMPS is the successor to OMI and part of a long line of ozone monitoring instruments, so it is important to have overlapping flight time. OMI spectrometer was built for the NASA satellite by scientists by the Royal Netherlands Meteorological Institute (KNMI) and it measures the amount of sunlight scattered by Earth’s atmosphere and surface. OMI allows scientists to assess how much ozone is present at various altitudes – particularly the stratosphere – and near the ground. It has been flying since 2004. Researchers will use the coming months (perhaps years) to cross-calibrate the instruments and ensure a seamless, standardized record.

The images bellow show the concentration of ozone in Earth’s atmosphere above the South Pole on January 27, 2012. The left image is based on data from the Ozone Monitoring Instrument (OMI) on the Aura satellite. Data collected on the first day of operations by OMPS is shown on the right. Measurements are expressed in Dobson Units, the number of molecules required to create a layer of pure ozone 0.01 millimeters thick at a temperature of 0 degrees Celsius and a pressure of 1 atmosphere (the air pressure at the surface of the Earth). The ozone layer’s average thickness is about 300 Dobson Units, a layer that is 3 millimeters thick. 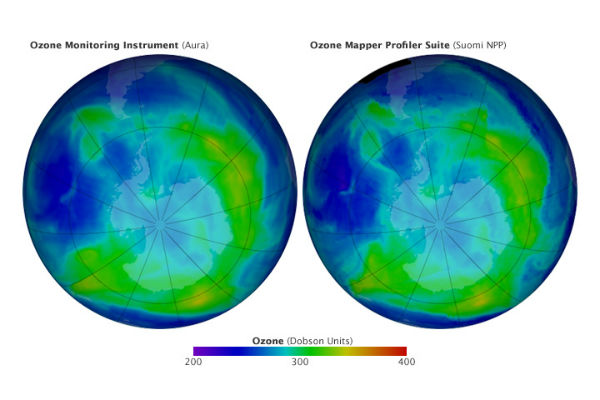 OMPS consists of three instruments: the downward-looking nadir mapper and nadir profiler, and a limb profiler. The nadir profiler and mapper observe the vertical distribution of ozone in ways that match the three decades of existing ozone measurements. The limb profiler is an experimental instrument that measures the distribution of ozone at higher vertical resolution by looking through the atmosphere on an angle. OMPS was funded by the National Oceanic and Atmospheric Administration and the U.S. Department of Defense.

The Suomi NPP team at NASA will continue initial checkouts of OMPS and other instruments as part of its commissioning activities until early March. Operations will then be handed off to NOAA, which will continue calibration and validation activities and lead the processing and distribution of data. Suomi NPP is the result of a partnership between NASA, NOAA, and the US Department of Defense. (EarthObservatory) 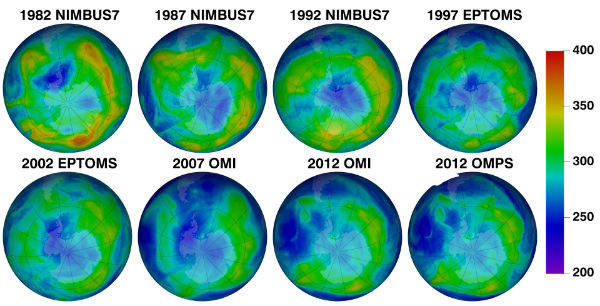 Ozone is a colorless gas. Chemically, ozone is very active; it reacts readily with a great many other substances. Near the Earth’s surface, those reactions cause rubber to crack, hurt plant life, and damage people’s lung tissues. But ozone also absorbs harmful components of sunlight, known as “ultraviolet B”, or “UV-B”. High above the surface, above even the weather systems, a tenuous layer of ozone gas absorbs UV-B, protecting living things below.