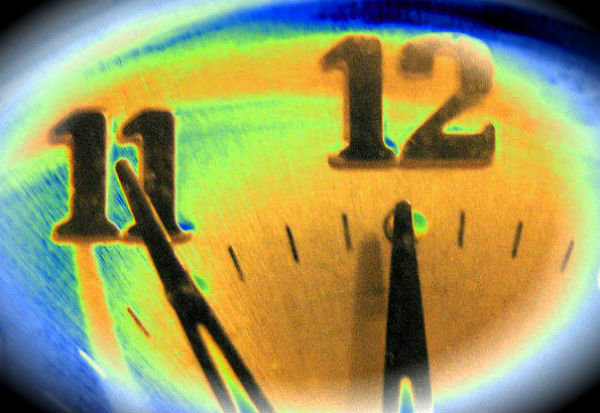 The Clock is ticking. Scientists yesterday set the hands of  “Doomsday Clock” forward one minute. Bulletin of the Atomic Scientists (BAS) director Kennette Benedict announced  on Jan. 10 at a press conference in Washington, D.C. that it’s five minutes to twelve now. In January 2010 the clock points six minutes to twelve so this means we are now symbolically a step closer to doomsday. The Doomsday Clock, which has been running since 1947, is a symbolic clock face that is supposed to indicate how close we are to global disaster. It is maintained by the Bulletin of the Atomic Scientists at the University of Chicago.

The BAS focused on the current state of nuclear arsenals around the globe, disastrous events and biosecurity issues. The nuclear accident at Japan’s Fukushima plant also highlighted the volatility of relying on nuclear power in areas prone to natural disasters, scientists said. The Bulletin panel found that despite hopes of global agreements about nuclear weapons, nuclear power and climate change in 2010, little progress has been made. The world still has approximately over 20,000 deployed nuclear weapons with enough power to destroy the world’s inhabitants many times over. And climate talks show no progress as expected.

“We’re trying to weight whether that was a wake-up call, whether it will make people take a closer look at this new and very powerful technology, or whether people will go on with business as usual.” Bulletin of the Atomic Scientists (BAS) director Kennette Benedict

The Doomsday Clock conveys how close humanity is to catastrophic destruction – the figurative midnight – and monitors the means humankind could use to obliterate itself. First and foremost, these include nuclear weapons, but they also encompass climate-changing technologies and new developments in the life sciences that could inflict irrevocable harm.

The Doomsday Clock came into being in 1947 and set the time at seven minutes to midnight, with midnight symbolizing humanity’s destruction. By 1949, it was at three minutes to midnight as the relationship between the United States and the Soviet Union deteriorated. After the first test of the hydrogen bomb, in 1953,  the clock ticked to two minutes until midnight.

In 1991, when the Cold War thawed and the United States and Russia began cutting their arsenals. The clock was at 17 minutes to midnight. From then until 2010, however, it was a gradual creep back toward destruction, as hopes of total nuclear disarmament vanished and threats of nuclear terrorism and climate change reared their heads. In 2010, the Bulletin found some hope in arms reduction treaties and international climate talks and nudged the minute hand of the Doomsday Clock back to six minutes from midnight from its previous post at five to midnight.

The full statement from BAS and a streaming audio recording of the January 10, 2012 news event can be found here.

Click here for a full copy of the BAS statement about the Doomsday Clock.