Heavy rains and mudslides in Colombia

Heavy rains flooded about 4000 homes south of Colombian capital Bogota with water up to 1.5m (5 feet) deep in some places. Torrential rains caused a landslide by loosened hillside about 200 miles northeast of Bogota, collapsing onto a bus and killing six passengers inside. Four others were injured when the mudslide nearly buried the bus, according to the Associated Press. 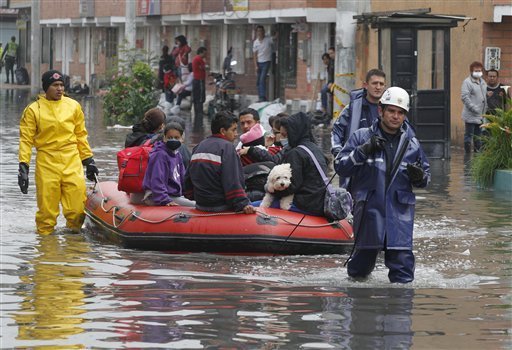 Flooding in the region, according to Bogota mayor Clara Lopez, is "10 times worse" than floods seen last year. An unusually strong La Nina has helped to bolster rainfall totals across the region where more than 140 people have been killed or remain missing from flood-related incidents since the beginning of September. (ABC)