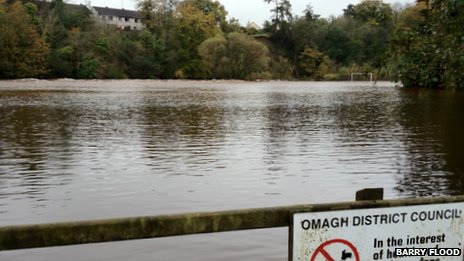 Torrential rain has flooded parts of South West England, Wales and Northern Ireland. Emergency plans are also in place in parts of the Republic of Ireland after more than a month's worth of rain fell there in a day.

Water poured through the streets when four different rivers overflowed. Commuters were taken by surprise – some were trapped in their cars for four hours on the journey home from work. One month's worth of rain fell in one day, according to Met Eireann and one of the Irish capital's biggest retail venues, Dundrum Shopping Centre, was forced to close. The Met office had issued a severe weather warning but no one expected disruption on this scale.

Dublin's largest shopping centre had to be evacuated. The ground floor of the complex at Dundrum resembled a swimming pool. Damage to shops will run into millions of Euros. (SkyNews)

Flooding targeted parts of southwestern England, Wales and Northern Ireland together with the Republic of Ireland, following rainfall of 50 to 100 mm (2-4 inches) within 24 to 48 hours. In Cornwall, southwestern England, a search was carried out for a girl who went missing on Monday, the BBC said in a report on Tuesday.

Sewage spilled into the streets of Par, Cornwall, during the height of the flooding. In neighboring Devon, several roads in Torbay were shut, and the seafront in the area was closed to traffic. Strong onshore winds were apparently sending large waves and a storm tide against the coast. Pembrokeshire, Carmarthenshire and Swansea were the hardest-hit counties of Wales. Roads near Milford Haven were "totally submerged" in places.. 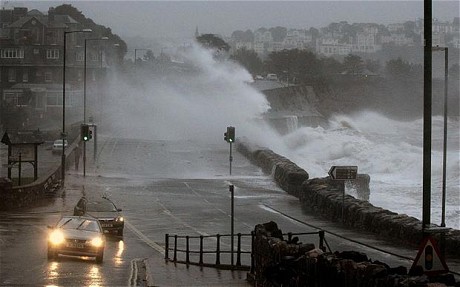 In Northern Ireland, 18 people had to be rescued by boat in County Tyrone amid numerous instances of flooding. Parts of Belfast were among areas hit hard by flooding. River flooding trapped some residents of Beragh in their homes.

Meanwhile, eastern areas of the Irish Republic were doused with torrential rain, resulting in flooding of major roads, houses and one of Dublin's main shopping centers, according to the BBC. An off-duty police officer was said to be missing in County Wicklow, near a flooding river.

Weather information accessed by AccuWeather shows that the flooding resulted from a stream of heavy rain-bearing cloud being directed across a relatively narrow swathe of the British Archipelago. A "blocking high" east of the instigating storm caused its train of downpours to repeatedly cross the same areas, rather than progressing eastward as would be more typical. 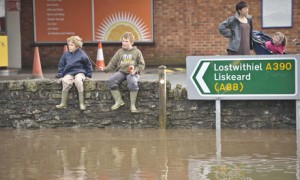 Dublin City Council has activated its major emergency plan as a result of widespread flooding in the city. Sustained rainfall led to major roads, houses and one of the city's main shopping centres going under water. An off-duty Irish police officer is missing in County Wicklow, close to where a river broke its banks.

Public transport was severely disrupted and in one part of the city an inflatable boat has been used to rescue stranded motorists. There were three-hour delays on some major routes out of the city, and the Dublin Dart train service has been suspended. The heavy rain also hit travellers along the east coast of Ireland with the Belfast-to Dublin Enterprise service being cancelled.

Two rivers which run into Dublin, the Dodder and the Camac, have overflowed. Authorities said further problems could be caused by an unusually high tide which was expected on Monday night. The Irish weather service, Met Eireann, has issued a severe weather warning for large areas of Ulster and east Leinster.

A spell of very heavy rainfall affected mainly Eastern and Northern parts of Ireland during the 24th October. Initial analysis of the available measurements results in the following comments. Although significant amounts affected many areas, the greater Dublin Area received by far the most rainfall. Our station at Casement Aerodrome in South West County Dublin set a new record of 82.2mm for the greatest daily total for the month of October for casement, since rainfall records began there in 1954. The greatest daily total for any month of the year for Casement was 108.6mm which fell on 11th June 1993.

The majority of the rainfall occurred during the period from 2 p.m. to 8 p.m. with 65.7mm falling in the 4 hours between 3 p.m. and 7 p.m. This 4-hour fall is approximately a 1 in 80 year event. The 23.0mm of rainfall which fell between 4 p.m. and 5 p.m. made this the wettest hour on record at Casement Aerodrome.

The stations at Dublin Airport and the Phoenix Park also had significant daily rainfall totals of 69.1mm and 71.3mm respectively. In terms of annual exceedence probability, the daily totals at the Dublin stations would represent approximately 1 in 20 to 1 in 25 year events. (MetEirrean) 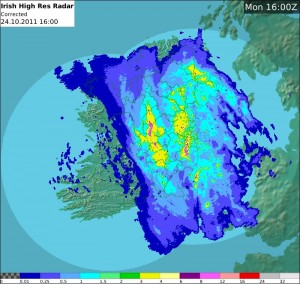 The table below summarises the most significant figures.

Placing these events in historical context:

Some areas, such as parts of Cornwall, saw over half a months worth of rain in one day.

The highest amount recorded in 24 hours was 68.4mm at Cardinham on Bodmin Moor, Cornwall. The long term average rainfall for Cardinham for October is 146.2mm.

Some of the rain fell in very short periods of time: In one hour around lunchtime Luxulyan, near St Austell, Cornwall, recorded 23.6mm of rain and at Milford Haven, Pembrokeshire, Wales, 17.8mm fell during the evening rush hour.

The rest of the week will see a mix of sunshine and showers, with southern Britain expected to have another wet day on Thursday.