A team of scientists from the Universities of Aberystwyth, Cambridge and Glasgow have digged through the historic flooding records to put the recent major flooding disasters in perspective. According to their analysis, events such as Storm "Desmond" are not as unprecedented as it seems in terms of their frequency or magnitude. The research also showed that flood risk and frequency forecast could be improved if data from 100 year old flood deposits was taken into account.

Dr. Tom Spencer from the University of Cambridge reacted to the Environment Secretary's statement, given on December 7, 2015, about the recent flooding event being 'unprecedented' and 'consistent with climate change trends'.

"Conventional methods of analyzing river flow gauge records cannot answer these questions because upland catchments usually have no or very short records of water levels of around 30 or 40 years. In fact, recent careful scientific analysis of palaeoflood deposits (flood deposits dating back hundreds of years) in the UK uplands shows that 21st-century floods are not unprecedented in terms of both their frequency (they were more frequent before 1960) and magnitude (the biggest events occurred during the 17th–19th centuries)."

According to Professor Mark Macklin, an expert in river flooding and climate change impacts at Aberystwyth University, UK documentary records and 100 year old flood deposits suggest the floods are not so unprecedented, after all, which would mean that flood risks are being highly underestimated, thus putting people's lives in danger.

Recent severe flooding events, either of the same magnitude or stronger than the largest recorded events can be caused by the climate variability in Atlantic margin weather systems. 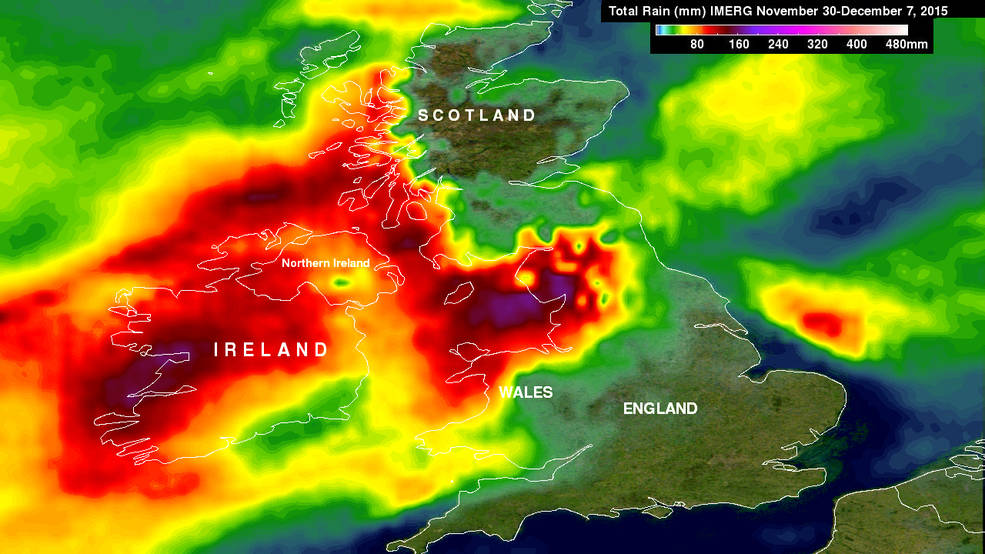 Data from NASA's IMERG were used to estimate rainfall for the period between November 30 and December 7, 2015 and found rainfall near the Irish Sea measured over 392 mm (15.4 inches). Up to 304 mm (12 inches) of rain were reported to have fallen in only 24 hours. Image credit: SSAI/NASA/Hal Pierce

"It is of concern that historical data suggests there is far more capacity in the North Atlantic climate system to produce wetter and more prolonged flood-rich periods than hitherto experienced in the 21st century. Looking forward, an increased likelihood of weather extremes due to climate change means that extending our flood record using geomorphology science must be placed at the center of flood risk assessment in the UK."

Professor Macklin thinks the new approaches to flood risk analysis could be improved by including instrumental, documentary and most importantly palaeoflood records.

"Current approaches using flood frequency analysis and flood risk assessment based on 40-50 year long flow records are far shorter than the design life of most engineering structures and strategic flood risk planning approaches. They are not fit for purpose now, let alone in a changing climate."

"What is needed, is far more resilience for already-developed floodplains, and much more serious insistence that future floodplain development should be virtually curtailed. Somewhere along the line floodplain development has been allowed by local authorities and the UK government to continue regardless,"Professor John Lewin from the University of Aberystwyth said.

"These floods and the 2013/14 storms have shown us that our landscape is dynamic rather than static – where rivers reshape floodplains and erosion remodels our coastline – with large economic and social costs. We need to urgently consider how we plan our cities and towns, and rebuild in the wake of large flood and storm events, to live safely in our changing landscape,"Dr. Larissa Naylor from the University of Glasgow explained.

Featured image: Data from NASA's IMERG were used to estimate rainfall for the period between November 30 and December 7, 2015 and found rainfall near the Irish Sea measured over 392 mm (15.4 inches). Up to 304 mm (12 inches) of rain were reported to have fallen in only 24 hours. Image credit: SSAI/NASA/Hal Pierce