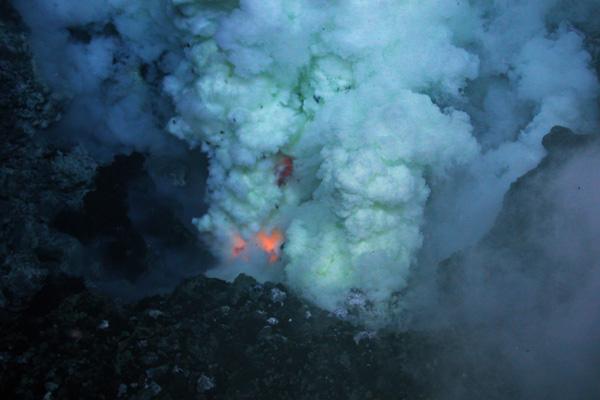 An underwater volcano West Mata is bursting with glowing lava bubbles. The deepest active submarine eruption seen to date is shedding light on how volcanism can impact deep-sea life and reshape the face of the planet.

Submarine eruptions account for about three-quarters of all of Earth’s volcanism, but the overlying ocean and the sheer vastness of the seafloor makes detecting and observing them difficult. The only active submarine eruptions that scientists had seen and analyzed until now were at the volcano NW Rota-1, near the island of Guam in the western Pacific.

Now researchers have witnessed the deepest active submarine eruption yet. The volcano in question, West Mata, lies near the islands of Fiji, Samoa and Tonga in the southwestern Pacific in the Lau Basin. Here, the rate of subduction — the process in which one massive tectonic plate dives under another, typically forming chains of volcanoes — is the highest on Earth, and the region hosts ample signs of recent submarine volcanism. 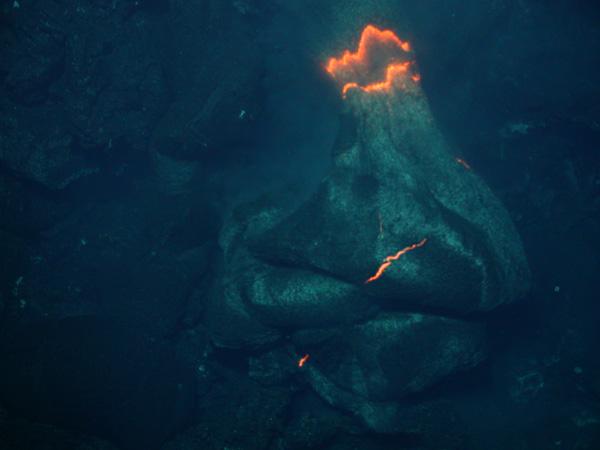 Scientists discovered West Mata in 2008 during a survey of the northeast Lau Basin. Explosive eruptions were seen in the following year there using a remotely operated underwater vehicle — the first eruption was called Hades, the second Prometheus, both occurring at a depth of approximately 1,200 meters (3,900 feet). The nearly continuous eruptions generated spectacular incandescent gas-filled bubbles of lava up to 1 meter (3 feet) wide. Gas flowing through the glowing lava could sometimes look flame-like in appearance, scientists said.

The rich soup of chemicals these eruptions spew out helps fuel communities of deep sea organisms at West Mata. For instance, the researchers witnessed shrimp colonies grazing on mats of microbes on the rocks. Deep-sea volcanism such as this might have nurtured the first life billions of years ago — we might see the same ingredients here as the ones used to make the first organic molecules on Earth. 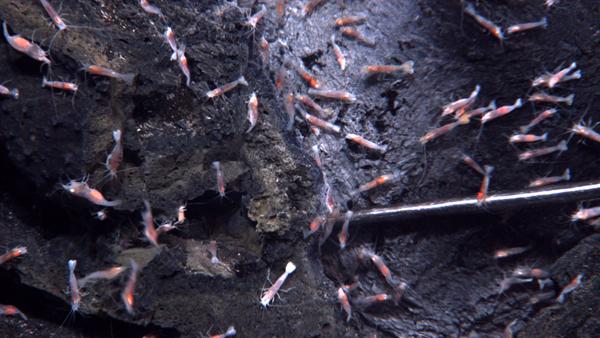 This submarine eruption is the deepest seen yet, about 700 m (2,200 feet) deeper than NW Rota-1. This was deeper than scientists had expected to see explosive eruptions. Water pressure goes up the further down you go, so as pressure goes up, the ability of gas as it comes out of magma to cause explosions is diminished, and the thought was that you wouldn’t get explosive eruptions below about 1,000 meters (3,300 feet).

Eruptions at centers of ocean floor spreading — where the majority of eruptions on Earth happen — generally seem to occur in relatively short episodes lasting hours to months, but West Mata appears to have erupted near continuously since it was first observed in 2008. This might be because magma is focused there, instead of being spread across many volcanoes at once. 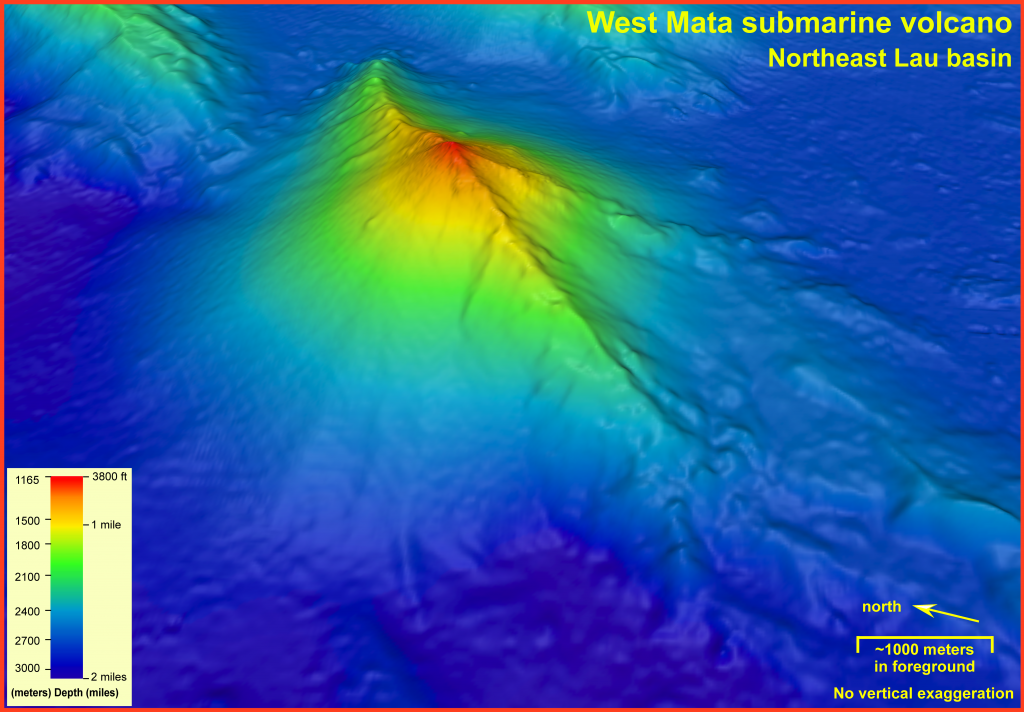 Samples the researchers gathered from West Mata revealed the volcano is spewing out boninite, a kind of water-rich lava never before seen, newly made and hitherto only unearthed in ancient deposits. Boninite is always linked with subduction zones, and these pristine samples could help yield new clues about subduction, especially its early stages. Subduction plays a key role in shaping the face of the planet by consuming and recycling material from the oceanic plates. (OurAmazingPlanet)

“One thing about the deep sea is that we still don’t have the best idea of what’s going on down there. The overlying ocean and its vast size makes it a relatively unexplored place. I’d like to continue exploration of the seafloor — I’d like humanity to know what else is on planet Earth and what else we can learn about it.” Researcher Joseph Resing, an oceanographer at the University of Washington in Seattle

Resing and his colleagues detailed their findings online Oct. 9 in the journal Nature Geoscience. 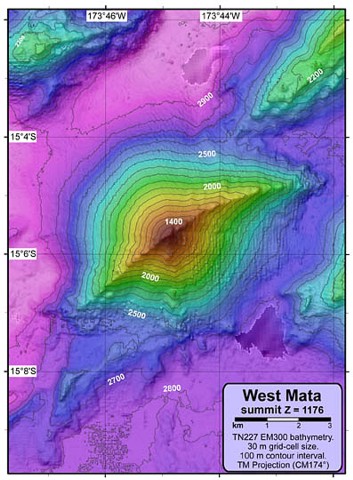 West Mata, a submarine volcano rising to within 1174 m of the sea surface, is located in the northeastern Lau Basin at the northern end of the Tonga arc, about 200 km SW of Samoa. West Mata volcano lies about 7 km west of another submarine volcano, East Mata; both lie at the northern end of the Tonga arc, north of the historically active Curacoa submarine volcano. The two volcanoes were discovered during a November 2008 NOAA Vents Program expedition, and West Mata was found to be producing submarine hydrothermal plumes consistent with a recent or lava effusion. A return visit in May 2009 documented explosive and effusive activity from two closely spaced vents, one at the summit, and the other on the SW rift zone. (GVP) 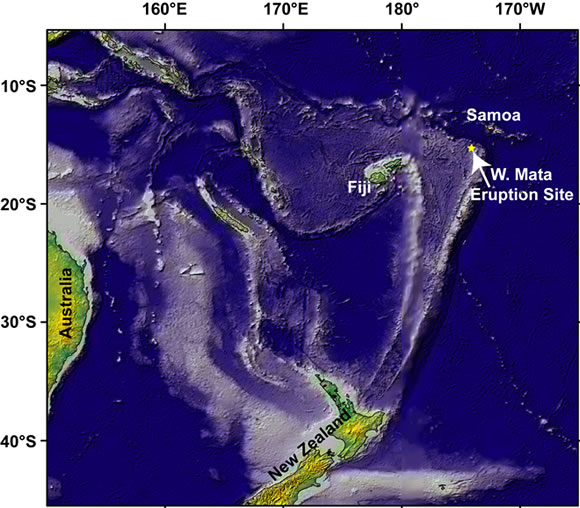