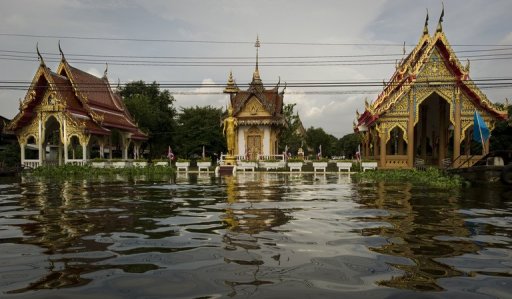 Thailand’s premier warned Thursday that it was impossible to stop the kingdom’s worst floods in decades gushing into Bangkok, ordering the city’s sluice gates to be opened to tackle the “national crisis”.

“We cannot block the water forever!”  Prime Minister Yingluck Shinawatra told reporters, in the biggest test so far of her fledgling administration. “The longer we block the water the higher it gets. We need areas that water can be drained through so the water can flow out to the sea.” 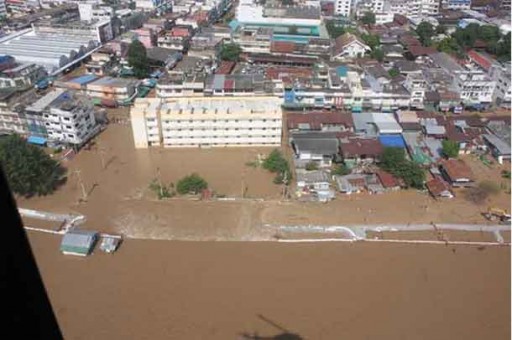 Autorities decided to ask Bangkok to open all gates, which could trigger an overflow, in order to drain water into the sea as soon as possible. The prospect of serious flooding in the capital triggered a new rush to stock up on food and bottled water, while motorists parked hundreds of cars on bridges or elevated roads, prompting a police warning to move them. Bangkok has so far escaped major flooding after the authorities reinforced floodwalls and diverted water to areas outside the capital to protect the country’s political and economic heartland. 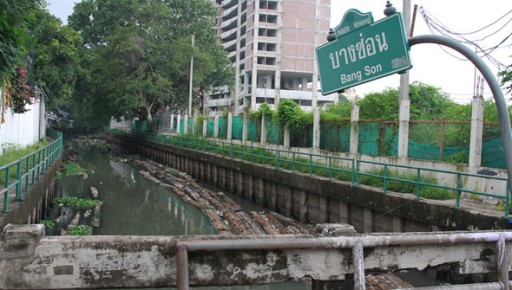 But a massive volume of run-off water is expected to reach the city by the weekend. It is hoped the water will run through Bangkok’s many canals and out into the sea, but if there is too much water the waterways will overflow. Flood waters are coming from every direction and city cannot control them because it’s a huge amount of water.

Three months of heavy monsoon rains in Thailand have killed 320 people, damaged the homes and livelihoods of millions of people, mostly in the north and centre, and forced tens of thousands to seek refuge in shelters. Currently, about one-third of Thailand’s provinces are affected.

The opposition Democrats are calling on the government to declare a state of emergency to make it easier to control people and stop them damaging dykes to ease the flooding in their own areas. Bangkok governor Sukhumbhand Paribatra warned on Wednesday that seven districts in northern and eastern Bangkok were at risk of inundation because of a broken dyke. He advised residents in those areas to unplug electrical appliances, move belongings to higher ground and study the city’s evacuation plan, saying they had 24 hours to prepare for possible flooding. 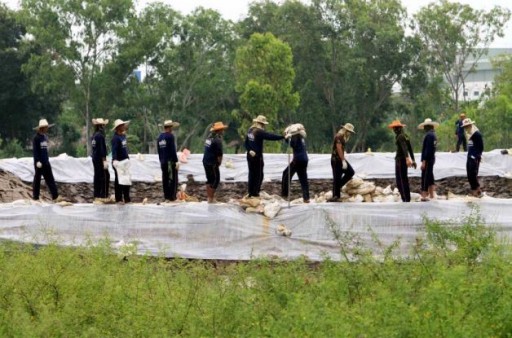 Runoff water is expected to reach Rangsit canal on the northern edge of the city overnight Thursday-Friday. Bangkok has an extensive drainage system including 200 floodgates, 158 pump stations, seven giant underground tunnels and 1,682 canals covering 2,604 kilometres (1,618 miles), according to the city authorities. Tens of thousands of soldiers and police have been mobilised to prevent people destroying flood defences. 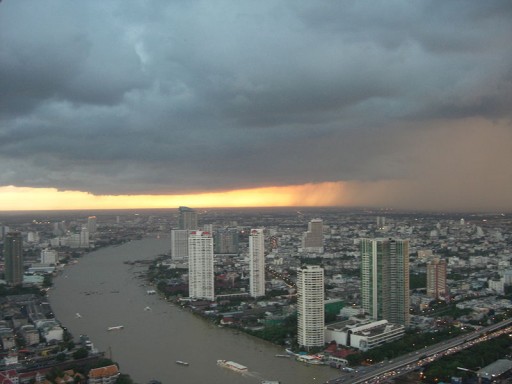 The authorities have failed to protect a number of major industrial parks from the gushing brown water, which has inundated hundreds of factories outside Bangkok, disrupting production of cars, electronics and other goods. The government says more than half a million people have been left without work. 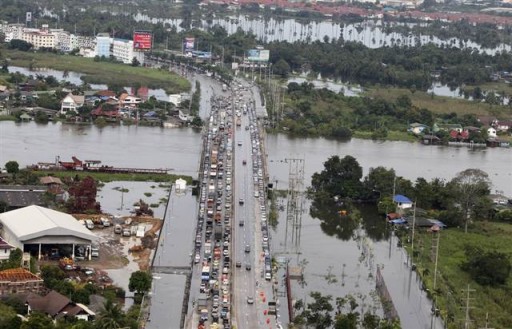 Most of Thailand’s main tourist attractions – including the southern islands of Samui, Phuket and Phi Phi – have been unaffected. Bangkok’s main airport is still operating as normal and its flood defences have been reinforced. (TerraDaily) 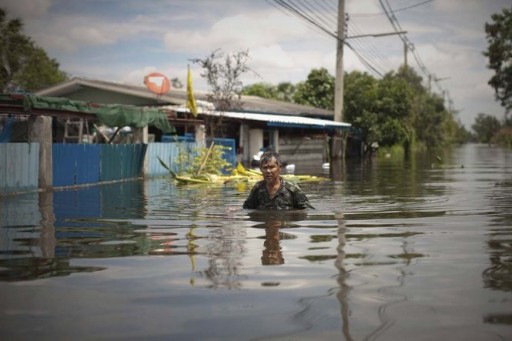 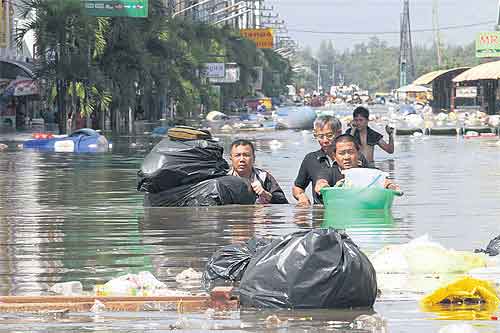 Admitting that Pathum Thani flood situation was out of control, the Northern Rangsit Irrigation Office Thursday said Bangkok would be inundated. 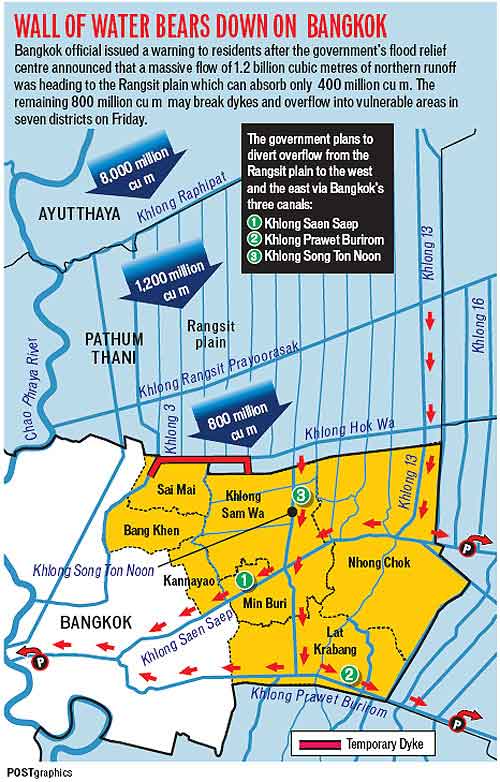 According to the proposal, Bangkok should allow water to pass through certain areas, such as Don Muang, to protect the inner city and the central business district. The city has the capacity to pump out and drain the water within six hours, as it normally does after heavy downpours.  Drainage via Bangkok would rein in the massive runoffs and overland flow, which would otherwise break down the system of dykes and levees, causing greater damage.

The proposal was the brainchild of two senior officials, deputy permanent secretary for Natural Resources and Environment Suphot Tovichakchaikul and irrigation project director Somkiart Prachamwong.  Somkiart said the volume of water heading to the capital was estimated at 10 billion cubic metres, including the water retained in lowlying areas in the Central region from Chai Nat to Nonthaburi. The amount of water is close to the capacity of Bhumibol Dam, which can accommodate 13 billion cubic metres. 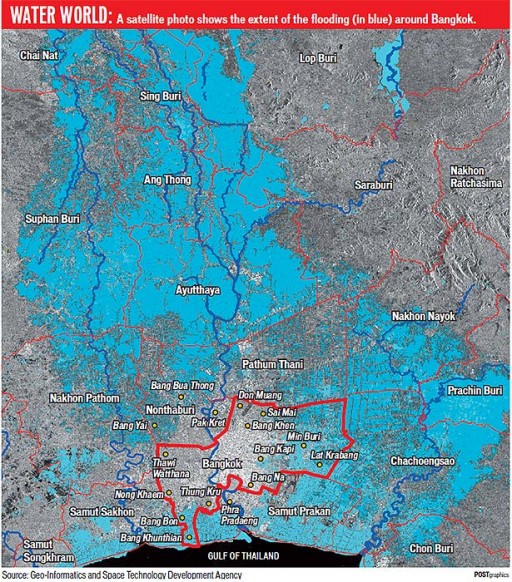 To prevent flooding, it is imperative that the overland flow is drained as quickly as possible into the sea, especially since additional runoff and heavy rain are expected to worsen the situation later this month.

Bang Bua Thong district was caught off guard when the flood surged into Nonthaburi early yesterday, leaving thousands of residents stranded in their homes without enough food and waiting impatiently for assistance. The flood water averages 1.5 metres in most areas, which are now accessible only by boats and military trucks. The escape of flood victims to schools and temples has been disorderly, as evacuation plans were not activated.

The Chao Phraya River discharges less than 200 million cu m/day while attempts to divert floodwater via the east and west of the capital can drain only about 86 million cu m daily.

About 40 metres of the dyke along Rapeepat Canal, around Canals 4 and 5, were breached late Tuesday evening, letting torrents stream across the road, which lies below and along the canal, then inundating over 50-60 households in downstream communities. Repair of the dyke was made difficult by the strong currents and emergence of the breach, said Charn Puangpetch, president of the Pathum Thani Provincial Administration Organisation.