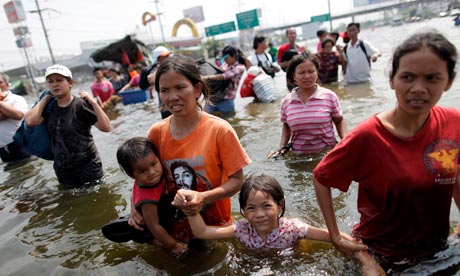 Thousands of Bangkok residents flocked to bus, rail and air terminals Thursday while heavy traffic snaked out of the sprawling Thai capital in an exodus from a mass of approaching floodwater. Water was seeping into central areas of the city of 12 million people, entering the grounds of the Grand Palace after the main Chao Phraya river overflowed at high tide, but most of downtown Bangkok was still dry.

A huge runoff from the north equivalent to almost half a million Olympic swimming pools is expected to reach the capital at the same time as seasonal high tides this weekend, testing the city’s flood defences. Many residents hunkered down in their homes, surrounded by sandbags or in some cases hastily erected concrete block walls, after the government ordered a five-day holiday for 21 provinces including Bangkok from Thursday.

Crowds of people abandoned their homes and headed to areas away from the path of the water, especially to the beach resorts of Hua Hin, Phuket and Pattaya. All of these destinations are packed with Thais who have moved from Bangkok. 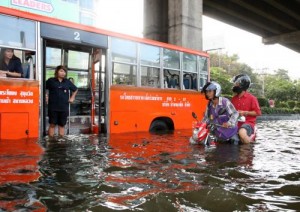 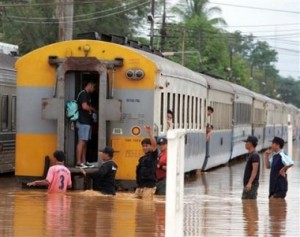 A steady flow of Thais and foreigners streamed into the capital’s bus terminals as people sought to escape, while Bangkok’s main train station was crowded and roads north and east out of the city were choked. Government offices, schools and some businesses were shut across Bangkok, where supermarkets have been running low on – and sometimes rationing – essential items such as bottled water and eggs as residents stock up.

“For a lot of people right now access to drinking water is one of the concerns,” said Jerry Velasquez, regional coordinator for the International Strategy for Disaster Reduction, a UN agency. “Bangkok is still in the early phase,” he added. “This is a once in a 100 years flood. This is intense.” 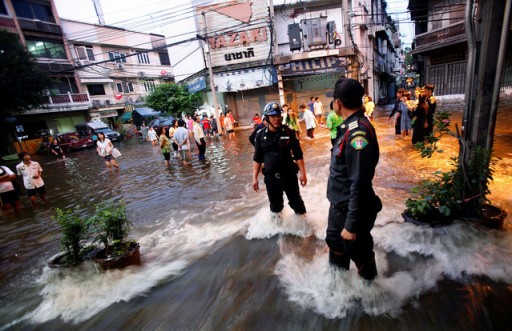 Much of the country has already been ravaged by the three-month flood crisis caused by unusually heavy monsoon rains, which has left more than 370 people dead and millions of homes and livelihoods damaged.

Districts north of the centre have already been inundated, shutting down the city’s second biggest airport, Don Mueang, which is currently serving as the headquarters of the government’s flood relief centre. The situation in the capital is critical, with the government preparing extra shelters for Bangkok evacuees, who already exceed 7,500. Tens of thouands of troops have joined the flood relief efforts.

The FROC on Wednesday evening urged Bangkok residents in flood-prone areas to leave the city, saying food and deliveries were expected to become more difficult. Thousands of inundated factories have also been shut down, putting more than half a million people temporarily out of work and disrupting global supply chains. (TerraDaily)

The flooding is the worst to hit the country since 1942 and has proved a major test for Yingluck’s nascent government, which took power in July and has come under fire for not acting quickly or decisively enough to prevent major towns north of the capital from being hit by floodwaters.

A report on state television on Sunday from Burma, Thailand’s western neighbour, said heavy rains and flash floods had killed 106 people after villages were inundated in the country’s north-west last week.