Floods destroying hundreds of acres of farmland in Butaleja, Uganda

Fresh floods have hit Butaleja District in the last four days, displacing more than 100 families and destroying hundreds of acres of farmland. The worst affected areas include Mazimasa and Himutu sub-counties, with affected families now camping in schools after heavy rains burst the banks of River Manafwa. The district is prone to floods because of its low altitude.

The rains are back and residents have nowhere to turn to as their crops now stand in the water. In Mazimasa, which lies along the belt of River Manafwa, several latrines and huts have collapsed, leading to fears of a cholera outbreak. 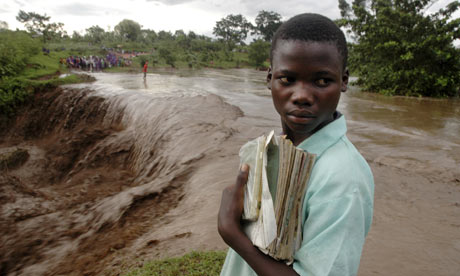 Butaleja LC5 chairperson Joseph Muyonjo, who visited the flood-hit areas over the weekend, said most roads had become impassable. Mr Muyonjo appealed to concerned authorities to rescue them by providing the affected people with relief items because most people are going without a meal.

The road from Mbale-Busolwe, which is the main link between the two districts, has also been submerged. (AllAfrica)