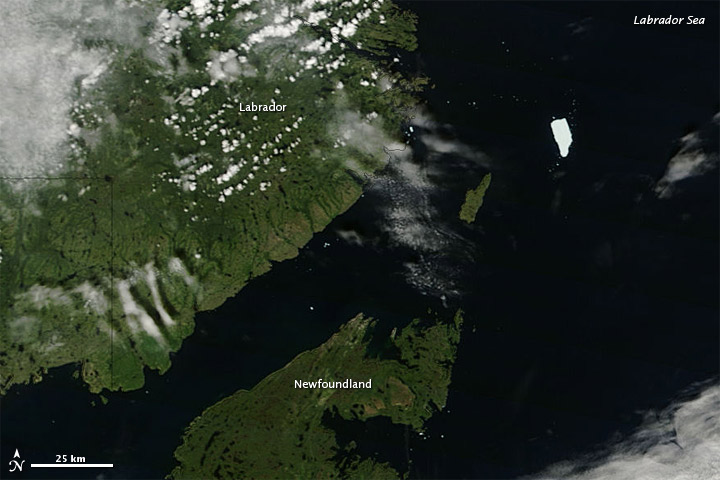 In August 2010, the Petermann Glacier along the north-western coast of Greenland calved an ice island roughly four times the size of Manhattan. Nearly a year later, on July 25, 2011, a piece of that ice island—named Petermann Ice Island-A (PII-A) – was still visible to the Moderate Resolution Imaging Spectroradiometer (MODIS) on NASA’s Terra satellite.

The island is continuing to drift southward along the coastline. It is now located approximately 10 kilometres due east of Spear Harbour. The island is not expected to reach land; its base would probably become grounded on the sea floor off the coast. The Canadian Ice Service (CIS) also reported that PII-A was continuing to lose surface area through calving and melting. The ice chunk does, however, pose a potential hazard for offshore oil rigs and shipping lanes.

PII-A is roughly the same size as the 52-square-kilometre Belle Isle, an uninhabited island just off the coast of Labrador and north of Newfoundland. The island, which lies at the Atlantic entrance to the Strait of Belle Isle, is located on the shortest shipping lane between the Great Lakes and Europe, and also on the main north-south shipping route to Hudson Bay and the Northwest Territories. (IrishWeatherOnline)

The below image from the MODIS on NASA’s Terra satellite on Monday morning, 25 July, shows the ice island inching its way closer to the coastline.

As July 2011 progressed, the Petermann Ice Island-A (PII-A) continued drifting southward in the Labrador Sea. When the Moderate Resolution Imaging Spectroradiometer (MODIS) on NASA’s Terra satellite captured this natural-color image on July 27, 2011, PII-A was about 60 kilometers (40 miles) northeast of Newfoundland. 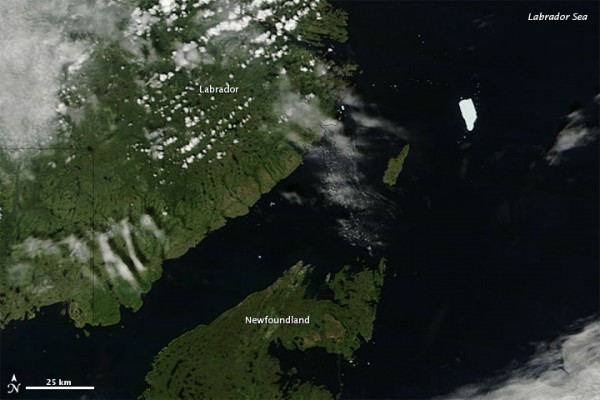 PII-A is a remnant of an ice island that calved off the Petermann Glacier along the northwestern coast of Greenland in August 2010. That ice island was about four times the size of Manhattan. In July 2011, PII-A was roughly the size of just one Manhattan, and the Canadian Ice Service reported that the ice island continued losing mass through breakup and melt. The ice island continued to pose a potential hazard to shipping lanes and offshore oil rigs, according to news reports. (EarthObservatory)