Tropical depresion 08W  is forming 775 nautical miles East-NorthEast of Andersen Ab, Guam and is moving westward. Maximum sustained surface winds are estimated at 30 knots gusting to 40 knots. TD 08W is located near 18,1N 157,3 E and is now subject of a tropical cyclone warning.

An area of convection has persisted near 16,7N 135E aproximately 460NM North-NorthWest of Yap. Animated multispectral satellite imagery sows low level convective banding wrapping into developing LLCC. Upper level analysis reveals that the LLCC is located beneath an anticyclone with strong  diffluent flow aloft and low vertical wind shear. Maximum sustained surface winds are estimated at 10 to 15 knots. Maximum sea level pressure is estimated to be near 1009MB. The potential for the development of a significant tropical cyclone within next 24 hour is low. (JTWC) 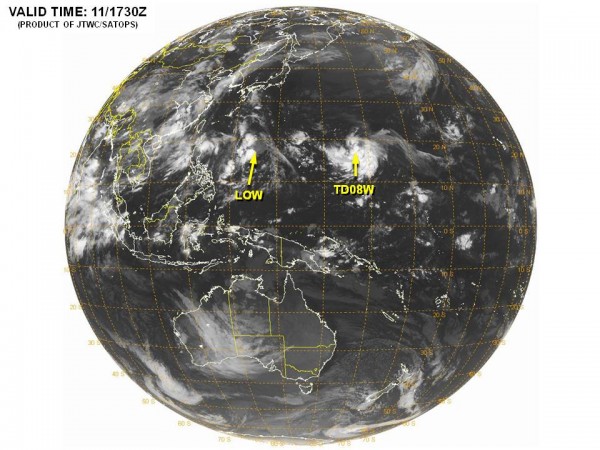