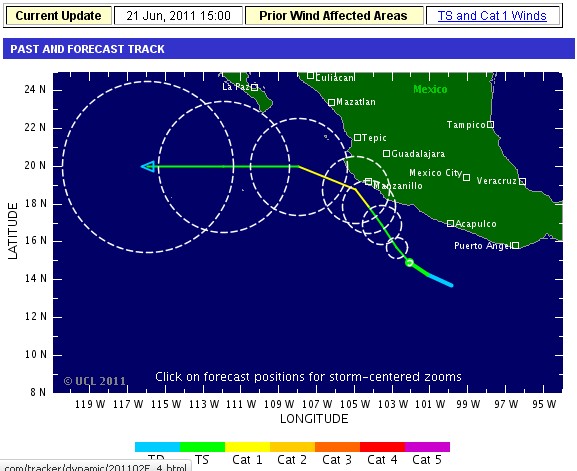 Hurricane Beatriz brushed Mexico’s resort-studded Pacific coast with powerful rains and winds early Tuesday, flooding streets as tourists hunkered down in hotels. Authorities closed the ports of Acapulco, Manzanillo and Zihuatanejo and urged hotel owners to tell guests not to go to the beach. As of late Monday, one tourist had been injured when a tree fell on him in Acapulco.

The U.S. National Hurricane Center said Beatriz’s winds grew to a hurricane-force 130 km/h early Tuesday and the storm was moving near or over the coast of Mexico overnight. The Mexican government issued a red alert for areas around the resort city of Manzanillo. Other warnings were issued from the resort city of Zihuatanejo northwest to Cabo Corrientes. Watches went out for other parts of the coast, including southern Mexican states.

Beatriz was located about 110 kilometres southeast of Manzanillo late Monday night and was moving north-northwest at 19 km/h. The hurricane was expected to drop 15 to 30 centimetres of rain along the coast of southwestern Mexico, possibly causing dangerous flash floods and mud slides. Some coastal flooding and large waves were expected in the hurricane warning area.

The eye of the storm is expected to pass within 60 kilometres of the beach town early Tuesday. In Manzanillo, many tourists were hanging out at the beach on Monday afternoon despite warnings not to. Farther south along the coast in Zihuatanejo, civil protection officials ordered the port closed completely and authorized five shelters in case of floods or mudslides.

Some streets and avenues in the tourist district and downtown were flooded Monday night. City officials had to go around picking up fallen trees.

About 150 Mexican soldiers were deployed on a rescue mission in case homes needed to be evacuated in Acapulco, the Mexican army said late Monday. Authorities say 100 homes were flooded, 20 trees fell and some avenues in the tourist district were also flooded because of the heavy rains. About 30 parked vehicles were swept by the current.