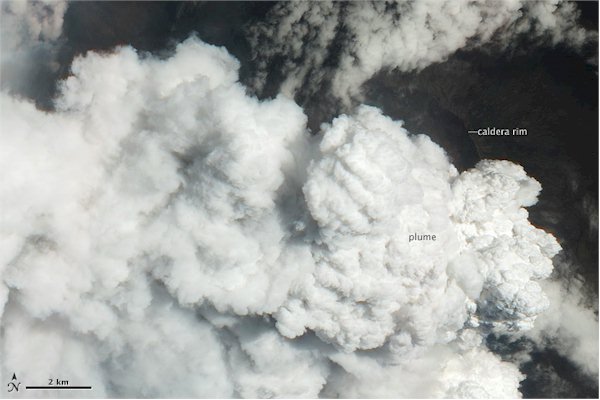 Volcanic activity has increased at the Nabro volcano in Eritrea, just four days after the stratovolcano sent an ash plume more than 15km into the air. The ash drifted west northwest over Sudan Wednesday evening threatening to bring further disruption to air traffic in the east Africa region. Sunday night’s eruption led to some flight cancellations in neighboring Sudan, Djibouti and Ethiopia, and saw a massive ash plume being carried as far away as Saudi Arabia, Israel, Turkmenistan, the Central African Republic and Egypt.

The MODIS Terra 1km True Colour satellite image, captured Wednesday afternoon, shows the ash plume drifting hundreds of kilometers west of Nabro. Part of the Afar Triangle, Nabro is one of many volcanic caldera complexes in the north easternmost part of the East African Rift valley region. The stratovolcano is located in the Danakil Depression, close to Eritrea’s border with Ethiopia and north of Djibouti, and has not erupted in at least 150 years. It is the most prominent of 3 large volcanoes (Nabro, Dubbi, Mallahle) in the region, each containing a large summit caldera. Nabro comprises lava domes, lava flows, and two calderas, 8 and 5 km in diameter. The volcano is located along the Great Rift Valley, also known as the East African Rift.

The divergent plate boundary extends from the Afar Triple Junction southward across eastern Africa, and is in the process of splitting the African Plate into two new separate plates, the Nubian Plate and the Somali Plate.  Seismic activity is frequent in Ethiopia. In 1961 alone three thousand tremors were recorded from the centre of the Wollo province resulting in a 20km fissure being opened on the slopes of the Borkena graben. (Irish Weather )

The inhabitants of Afambo, Nebro and Sireru have disclosed that they have been moved to a safer location. Pointing out that there were occasional quakes in their areas, the inhabitants thanked the government for the fast relocation after the eruption, as a result of which there were no casualities.

It is to be recalled that the eruption of June 12th around the areas of Afambo, Nebro and Sireru released large quantities of dust and smoke and the quake of 5.7 Richter .

The Djibouti based “Observatoire Géophysique Arta” has published far higher Magnitude values than earlier reported by EMSC.  The Magnitudes they have listed were : 3.9, 4.4 and 4.5. Interesting to know is also that the present cloud only contains ash close to the volcano. The extended plume contains mainly SO2 and Ice. 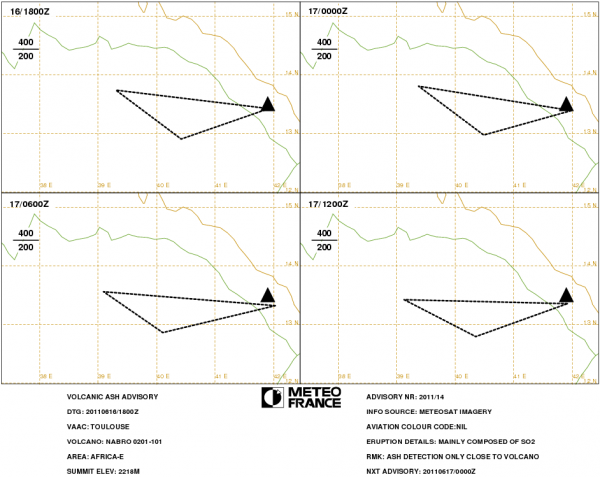 Lufthansa, Ethiopian Airlines, Turkish Airlines, Flights Dubai, Emirates Airlines and Kenya Airlines canceled some of its flights to East Africa and Southeast, the report said Earthquake. The countries most affected so far are Ethiopia, Eritrea, Sudan and Egypt, being located in countries with more ash and canceled flights. The last ash cloud reached at this time to the city ofCairo.

The volcanic activity of the volcano in Eritrea Three NaBr was reinforced by new earthquake on 3 degrees of the Richter scale, forcing the airlines to suspend its flights, according to information from the report at 8:35 UTC on the day today.

For Israel , the weather service said today that there is no effect on flights in the country. Ash arrived in Israel Tuesday morning, but at an altitude of 10,500 to 14,000 meters, 6,000 meters above mean domestic air routes Israeliana.

The cloud of ash left Israel, said meteorologist Evgeny Brainin, according to Jerusalem Post this morning. The new load of ash explosions reached the following southern Egypt and Cairo, he added.

For now, the center of Toulouse Observations Ash still can not determine whether the new clouds will impact on flights, especially with regard to sulfur dioxide, and there is no report on the subject, explains the meteorologist. In any case, could affect Israel in two days. (LaGranePoca)