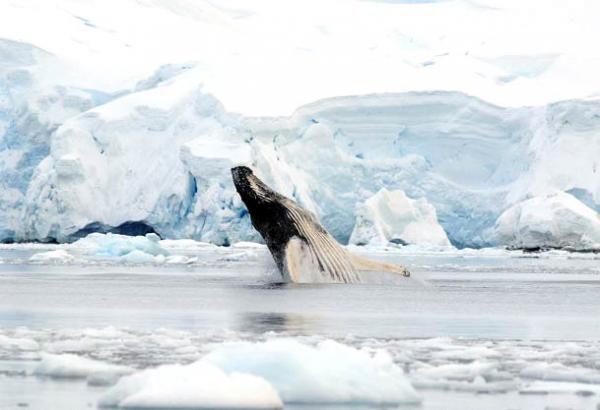 A record-breaking crowd of humpback whales has been seen in chilly waters near Antarctica, giving researchers a unique opportunity to study the colossal creatures. However, scientists warn the unprecedented whale numbers, drawn to the region for all-night feasting on their favored prey, may portend hard times ahead for the region's other residents in an ominous sign of climate change.

"In the published literature this is the highest density estimate for humpback whales, period," said Ari Friedlaender, a research scientist at Duke University in North Carolina and co-author of a paper published today (April 27) in the online science journal PLoS ONE.

Researchers studied the bay during two six-week trips in May 2009 and 2010, a time of year when summer is waning and the colder weather of austral autumn is setting in. It was 2009 that saw record-breaking whale crowds, but similarly impressive numbers were around in 2010 as well.

From their research vessel, the team witnessed whale gluttony that might make the Romans blush. The bay was teeming with tiny marine creatures called krill — humpback whales' favorite food — roughly 2 million tons worth, data indicate. Instruments aboard the ship showed the ghostly pink, shrimp like crustaceans were swarming the bay from the surface waters to as far as 985 feet (300 meters) down.

The whales would feed continuously for 12 or 14 hours, "gorging until 9 or 10 the next morning, when they would kind of go into a food coma, and just be asleep on the surface," Friedlander said. "So it made counting them very easy."

But the researchers weren't just there to count the whales — they also affixed tags to the humpbacks, which, for the 24 hours they stay attached to the massive beasts, capture data on everything from temperature to sound to position, allowing researchers to construct a 3-dimensional map of the whale's underwater activities, complete with a soundtrack. The lethargic whales sometimes barely budged when researchers paddled up in a small boat and thwapped a tag onto their heads.

However, all the whale feasting and easy access for researchers may come with a high price, Friedlaender said, because of the complex relationship between krill, predators and sea ice, which is disappearing from the region.

Climate change is keeping the region ice-free for far longer than in past years, said Ted Scambos, a lead scientist at the National Snow and Ice Data Center (NSIDC), part of the University of Colorado.

The history of Antarctica's sea ice is a complicated one. Records indicate there was a huge drop in sea ice around the frigid continent sometime in the '60s or early '70s to near-present day levels — and there has been a slight increase in sea ice since then. However, Scambos said, there is one big exception: the Antarctic Peninsula, particularly the western side, "where everything is going gangbusters in the direction of warming." Changes in wind patterns have brought warm weather to the region, and the area around the peninsula has warmed by 4 or 4.5 degrees Fahrenheit in the last 50 years.

Sea ice is crucial for krill populations, acting as a sanctuary, a nursery and a rich pasture for the tiny crustaceans.

Under the cover of sea ice, the young krill are shielded from predators, and the older krill feed on the algae and phytoplankton that live beneath the floating ice fortresses. No sea ice means the krill are laid bare as an all-you-can-eat buffet for whales.

In addition, creatures that are land-bound, such as penguins and seals, have a hard time reaching krill without sea ice, which provides a natural raft to reach the abundant food source.

"In the short term, the whales are going to be the ones that gain, but in the long term, if we increase the predation rate and decrease the amount of recruitment in the population, there's going to be less krill for everybody," Friedlaender said, adding that it's important to be aware of the situation, and understand what the extent of the challenges are going to be, especially since few people have the opportunity to see the region for themselves.

"It's a difficult experience to describe, being in a bay in Antarctica with a lot of whales," Friedlaender said. (OurAmazingPlanet)

Humpback whales are known for their magical songs, which travel for great distances through the world's oceans. These sequences of moans, howls, cries, and other noises are quite complex and often continue for hours on end. Scientists are studying these sounds to decipher their meaning. It is most likely that humpbacks sing to communicate with others and to attract potential mates.

These whales are found near coastlines, feeding on tiny shrimp-like krill, plankton, and small fish. Humpbacks migrate annually from summer feeding grounds near the poles to warmer winter breeding waters closer to the Equator. Mothers and their young swim close together, often touching one another with their flippers with what appear to be gestures of affection. Females nurse their calves for almost a year, though it takes far longer than that for a humpback whale to reach full adulthood. Calves do not stop growing until they are ten years old.

Humpbacks are powerful swimmers, and they use their massive tail fin, called a fluke, to propel themselves through the water and sometimes completely out of it. These whales, like others, regularly leap from the water, landing with a tremendous splash. Scientists aren't sure if this breaching behavior serves some purpose, such as cleaning pests from the whale's skin, or whether whales simply do it for fun. (National Geographic)