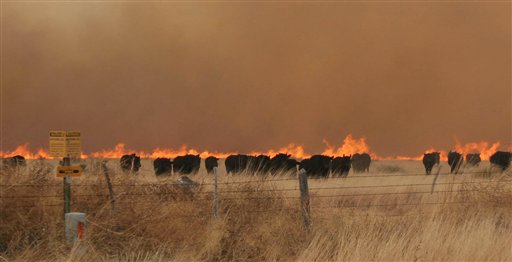 Since April 6, more than a million acres have burned throughout the state of Texas, according to the Texas Forest Service. This image, taken by the Moderate Resolution Imaging Spectroradiometer (MODIS) on NASA’s Aqua satellite, shows conditions on April 15, 2011. Wind whipped both smoke and dust southeast across the state. The fires detected by MODIS are marked in red. 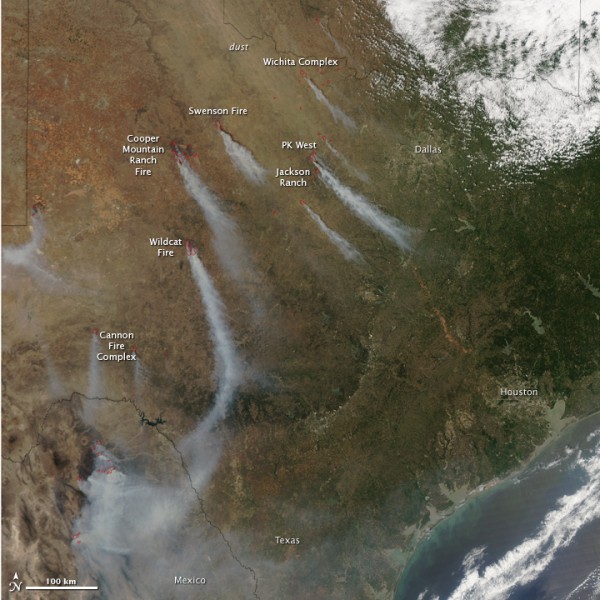 The image illustrates one of the primary reasons fire danger is extremely high in Texas: strong winds. Warm temperatures, dry vegetation, and low humidity are also contributing to hazardous fire conditions. Normally a rainy month, March 2011 was the driest March on record, said the Texas Forest Service. Plentiful rains in 2010 spurred grass and shrubs to grow. The recent lack of rain, warm temperatures, and low humidity have turned all of that vegetation into dry tinder, creating unprecedented fire danger.

As of April 18, at least 23 large wildfires were burning in Texas. Seven of the largest are labeled in the image. The image also shows two wildfires burning in northern Mexico. So far in 2011, firefighters have responded to 7,807 fires, which have burned 1,528,714 acres of land and 244 structures, said Governor Rick Perry in an April 16 request to President Obama for a federal declaration of a major disaster. (EO) 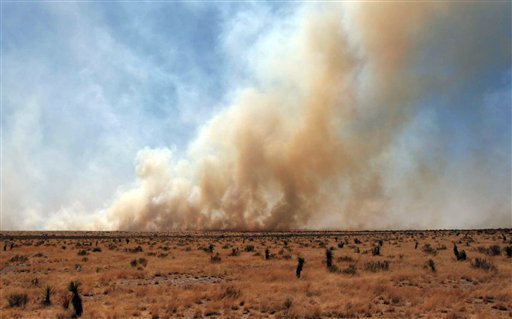 Dozens of large fires continued to burn out of control Monday in Texas in what officials have described as unprecedented conditions that show no signs of abating soon.

“We’re experiencing conditions never seen in Texas before,” said Marq Webb, a spokesman with the Texas Forest Service. “Yesterday, we had 1,400 people and that number will go up today,” he said in a telephone interview Monday from the service’s incident command center in Merkel just west of Abilene.

In all, the Forest Service has been asked to help battle fires covering some 700,000 acres. Thirty-one fires were being fought in East Texas; another 11 fires in West Texas.

“We’ve had 19 consecutive days of just super-dry weather, relative humidities in the single digits,” said Forest Service spokeswoman C.J. Norvell in Midland. “What we’re seeing right now is winds that are typical of spring, but everything else is typical of late summer — no rain, vegetation that’s just super dry. When you combine those two, it really has not boded well.“

The fires have a variety of causes –  some of them acts of nature, such as lightning strikes – but most of them acts of man. Those include anything from fence welding to debris burning, despite the fact that burn bans are in effect for 195 of the state’s 254 counties. Texas authorities have made an arrest in connection with one of hundreds of blazes scorching the state in what a Forest Service official called the “perfect storm for wildfires.”

Though temperatures are expected to dip Wednesday, they were predicted to ramp back up on Thursday and Friday Such weather has taxed the resources available to fight the fires. Conditions this spring are the driest they’ve been in Texas since 1917, said a Texas Forest Service spokeswoman. 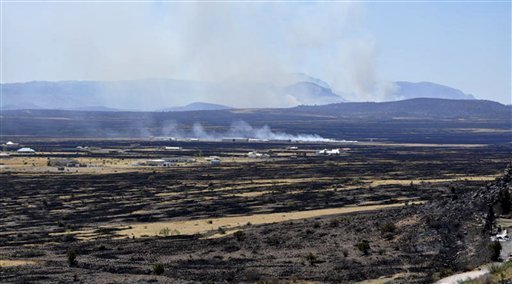 Authorities have responded to 7,807 fires across more than 1.5 million acres since this year’s wildfire season began, Gov. Rick Perry wrote over the weekend in a letter to President Barack Obama. Perry requested that the federal government declare Texas a disaster area. Fires have affected all but two of the state’s 254 counties. Perry noted that one firefighter has died and 18 others have been injured, while 244 homes have been destroyed and another 8,514 threatened residences “saved.”

In the Possum Kingdom complex west of Fort Worth, approximately 90 head of cattle were killed by the fire. In southwest Austin, 10 homes suffered major damage and six suffered minor damage in a 100-acre area, said Matt Curtis, a spokesman for Mayor Lee Leffingwell. Curtis said Monday morning that the fire was contained, though firefighters were expected to spend the day looking for potential flareups and hot spots. (CNN)