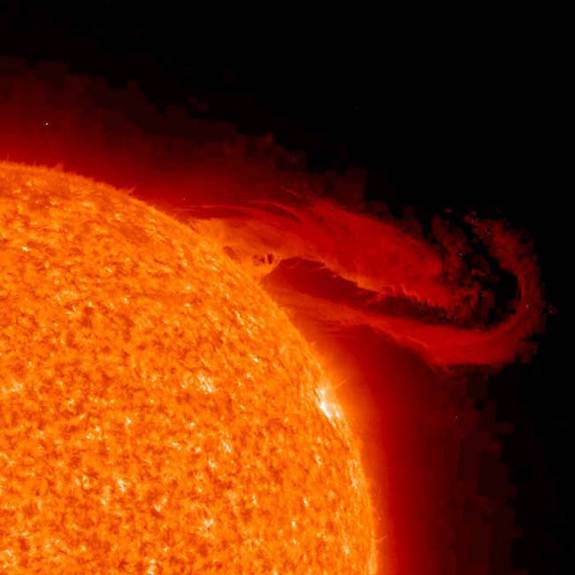 Sun woke up after three years of sleep. Several powerful solar flares occurred in recent months, with a February 14 blast as the strongest and  the most powerful outburst in more than four years. Considering surface of Sun dotted with sunspots and recent activity, researchers are confident that all signs suggest that the Sun has shaken itself out of its slumber.

2008 was one of the strangest year if you ask any solar observer – missing sunspots, subsiding solar flares and flat-lined solar monitors. This latest solar minimum lasted longer than usual, prompting some researchers to wonder if it would ever end. However, this year has started off with a bang, as sunspots are crackling with activity. Solar observing satellites have detected two powerful X-class solar flares — with one erupting on Valentine’s Day, while the other occurred on March 9.

The fastest coronal mass ejection (CME) in almost six years occurred on March 7, hurling a billion-ton cloud of charged particles away from the Sun with speed of 8 million km/h (5 million mph). Luckily, this plasma cloud wasn’t aimed directly at Earth, but it did deliver a glancing blow to our planet’s magnetic field.

There have been 24 numbered solar cycles since researchers started keeping track of them in the mid-18th century. Only four solar cycles in recorded history have ever started more slowly than this one. Three of them were in the Dalton Minimum, a period of depressed solar activity in the early 19th century. The fourth was Cycle number 1 itself, around 1755, also a relatively low solar cycle.

Experts predict solar activity will peak around 2013. So Earth could soon be seeing yet more powerful solar storms, which could mean more stunning auroras as well as some less desirable side effects — the blasts can disrupt satellites and power grids, as well as pose a danger to astronauts on spacecraft.