Wildfires have burned thousands of acres in the past month as the state of Oklahoma and its farmers struggle with a severe drought. Oklahoma was drier in the four months following Thanksgiving than it has been in any similar period since 1921.

Drought and high winds generated severe dust storms that stripped the land of its topsoil. Neighboring states are in similar shape as the drought stretches from the Louisiana Gulf coast to Colorado, and conditions are getting worse, according to the U.S. Drought Monitor.

The area in Texas covered by an extreme drought has tripled in the past month to 40 % and in Oklahoma it nearly doubled in one week to 16%. An extreme drought is declared when there's major damage to crops or pasture and widespread water shortages or restrictions.

While dozens of people in Kansas, Oklahoma and Texas have lost homes to the hundreds of grassfires that have torn through the parched landscape in the past month, Oklahoma officials said more fires caused more damage as recently as 2009. This year, the biggest losses are likely to come from the drought's effect on the wheat farmers planted last fall and hoped to harvest in June, they said.

Almost all of Oklahoma is covered in some degree of drought. Only the far northeastern corner has escaped, thanks to a few big winter snowstorms.

Mike Spradling, the president of the Oklahoma Farm Bureau, said many wheat farmers have considered just plowing under their fields and switching to another crop. Associate state climatologist Gary McManus said conditions have actually gotten worse since crops began emerging. The plants have rapidly sucked up the limited moisture in the soil.

"Some places have already lost their wheat crop farther south and in the Panhandle," he said. "In the driest parts of the state, the rainfall they have gotten, it's not enough to make them rest easy with their crops. It's just a bad situation."

Paul Fruendt said he's been farming for 25 years and he's never seen such bad growing conditions. His farm in Guthrie in central Oklahoma got a little rain, but he said his crops will still probably run out of water within a few weeks.

"For us already, we're going to suffer," said Fruendt, who invested about $100,000 in his wheat. "Probably two-thirds of our gross income has been wiped out for the next six months."

Ranchers in western Oklahoma are worried about their land too. Monte Tucker, 36, a volunteer firefighter and cattle rancher who lives in Sweetwater near the Texas border, said the grass and brush on his property are like tinder. He saw 1,500 of his 5,000 acres burn a few years ago, and without rain, it could easily happen again this year. (AP)

The wide variety of disciplines affected by drought, its diverse geographical and temporal distribution, and the many scales drought operates on make it difficult to develop both a definition to describe drought and an index to measure it. Common to all types of drought is the fact that they originate from a deficiency of precipitation resulting from an unusual weather pattern. If the weather pattern lasts a short time (e.g., a few weeks or a couple months), the drought is considered short-term. But if the weather or atmospheric circulation pattern becomes entrenched and the precipitation deficits last for several months to several years, the drought is considered to be a long-term drought.

Many quantitative measures of drought have been developed in the United States, depending on the discipline affected, the region being considered, and the particular application. The most frequently used indicators of drought are those developed by Wayne Palmer in the 1960's. These include the Palmer Drought Severity Index (PDSI), the Palmer Hydrological Drought Index (PHDI), the Palmer Z Index and the Crop Moisture Index (CMI). These indices have been used in countless research studies as well as in operational drought monitoring during the past 35 years. The Palmer drought index has proven to provide one of the best indications of drought for much of the United States. It is superior to other drought indices in many respects because it accounts not only for precipitation totals, but also for temperature, evapotranspiration, soil runoff and soil recharge.

The Z Index measures short-term drought on a monthly scale while the CMI measures short-term agricultural drought on a weekly scale. The PDSI measures drought duration and intensity of long-term drought-inducing circulation patterns and responds fairly quickly as meteorological patterns often quickly change from one regime to another. However, a reflection of the long-term effects of drought on systems affected by long-term precipitation deficits is measured by the PHDI, a measure of the hydrological impacts of drought. These impacts, such as reservoir levels, groundwater levels, etc., take longer to develop and it takes longer to recover from them. It is from this index, the PHDI, that we calculate the precipitation amounts and probabilities of ending or ameliorating drought. (NOAA) 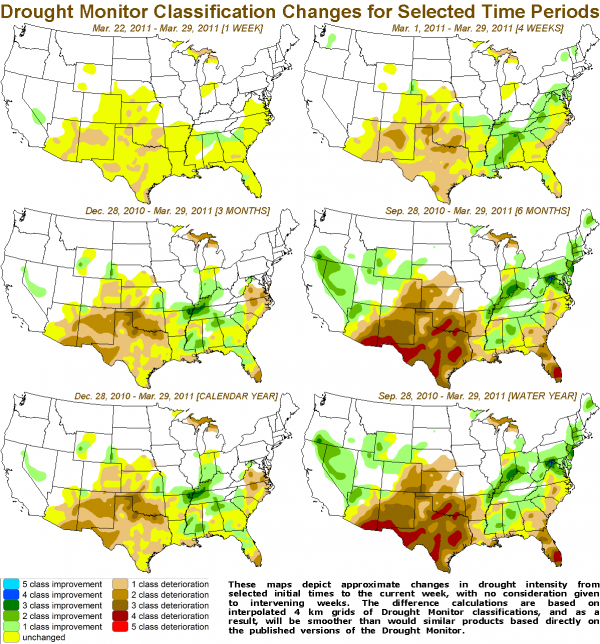 What is a drought?

A drought is defined as "a period of abnormally dry weather sufficiently prolonged for the lack of water to cause serious hydrologic imbalance in the affected area." -Glossary of Meteorology (1959).

In easier to understand terms, a drought is a period of unusually persistant dry weather that persists long enough to cause serious problems such as crop damage and/or water supply shortages. The severity of the drought depends upon the degree of moisture deficiency, the duration, and the size of the affected area.

There are actually four different ways that drought can be defined.

Meteorological-a measure of departure of precipitation from normal. Due to climatic differences, what might be considered a drought in one location of the country may not be a drought in another location.

Agricultural-refers to a situation where the amount of moisture in the soil no longer meets the needs of a particular crop.

Hydrological-occurs when surface and subsurface water supplies are below normal.

Socioeconomic-refers to the situation that occurs when physical water shortages begin to affect people.

What are the impacts of a drought?

Lack of rainfall for an extended period of time can bring farmers and metropolitan areas to their knees. It does not take very long; in some locations of the country, a few rain-free weeks can spread panic and affect crops. Before long, we are told to stop washing our cars, cease watering the grass, and take other water conservation steps. In this situation, sunny weather is not always the best weather.

Here in the desert Southwest, weeks without rain are not uncommon. However, when the weeks turn to months, serious problems can arise. Because of the fact that much of our drinking water comes from snowmelt, a dry winter can have serious implications in terms of how much water is available for the following summer season. Most locations have sufficient water reservoirs to make it through one dry winter. The real problem becomes back to back dry winter seasons, similar to what is occurring during the 1998-2000 period of time. With two significantly below-normal precipitation winter seasons, reservoirs are becoming low and the fire danger rises as the forests dry out. However, summer rains can alleviate the situation, as the monsoon season typically develops by July.

The Dust Bowl days of the 1930's affected 50,000,000 acres of land, rendering farmers helpless. In the 1950's, the Great Plains suffered a severe water shortage when several years went by with rainfall well below normal. Crop yields failed and the water supply fell. California suffered a severe drought around 1970. Rainfall was below normal for 1 1/2 years, and by the time September 1970 arrived, the fire potential was extremely high and dangerous. Temperatures rose to near the century mark and fires broke out. Losses were in the tens of millions of dollars.

The worst drought in 50 years affected at least 35 states during the long hot summer of 1988. In some areas the lack of rainfall dated back to 1984. In 1988, rainfall totals over the Midwest, Northern Plains, and the Rockies were 50-85% below normal. Crops and livestock died and some areas became desert. Forest fires began over the Northwest and by autumn, 4,100,000 acres had been burned. A government policy called "Let Burn" was in effect for Yellowstone National Park. The result? Half of the park--2,100,000 acres were charred when a huge forest fire developed.

How do meteorologists predict droughts?

Meteorologists determine the onset and the end of a drought by carefully monitoring meteorological and hydrological variables such as precipitation patterns, soil moisture, and stream flow. To do this, meteorologists make use of various indices that show deficits in precipitation over periods of time. 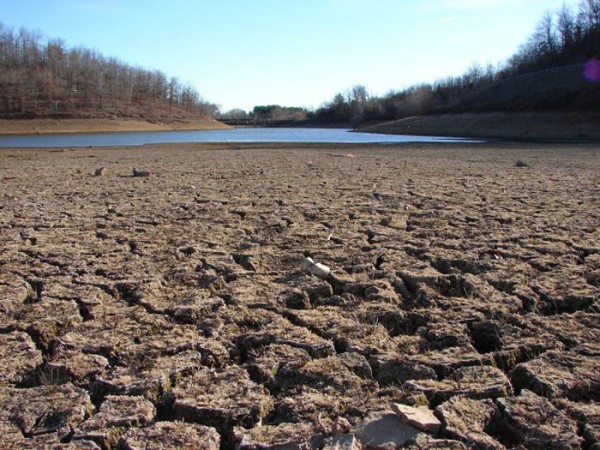