Allegedly high rainfall which lasted from Friday afternoon, is the cause of the abundance of water discharge. From field observation, there are hundreds of houses inundated in both the village.

Regarding emergency assistance to victims who are accommodated in the post, they are waiting for assistance from local government kriman Sumbawa.  From information received I Irawan, assistance with travel. In addition to the Western District Alas, floods also menggelamkan puouhan home in Orchard Lake Village In Bhakti, and the Village District Gontar Alas. Several homes flooded by water, including public service facilities such as Post Office Branch Alas, Alas sub-district health centers and UPT. (Poleshift.ning) 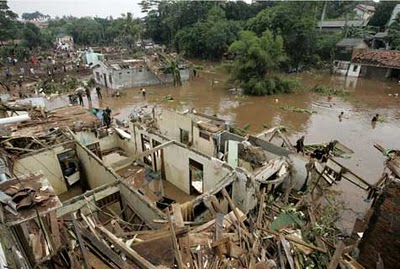 NASA's Terra and Aqua satellites captured a majestic shot of blooms of phytoplankton showing up in higher concentrations across the Arctic Ocean this summer. Every summer, parts of the Arctic Ocean and surrounding seas lose their ice cover and bask in ample...

An international team of researchers published a new study providing new clues about how and where subduction begins on Earth, the process behind the deadliest volcanic eruptions. The Earth's largest earthquakes and most explosive volcanoes occur at subduction...

Hurricane "Isaias" is moving over the Bahamas on August 1, 2020, and is expected to approach the southeast coast of Florida later today and Sunday, August 2. On the forecast track, the center of Isaias will move near or over Andros Island in the...

Patagonia reels from one of its worst winters in 20 years, agricultural emergency declared

Residents in South America's Patagonia region are experiencing one of the area's harshest winters in the last 20 years. Intense rains, heavy snowfall, and below-freezing temperatures also affected the agricultural sector, prompting authorities to declare an...

Heavy rainfall triggered damaging floods and mudslides in a number of municipalities in western Georgia on Wednesday, July 29, 2020. About 2 000 residents were cut off after roads were inundated, 400 families were left without water supply, and 10 bridges were...

A violent supercell storm produced severe hailstorm over central Slovenia on Wednesday evening, July 29, 2020. Ice stones up to 10 cm (4 inches) in diameter left enormous damage along its path in what is now the first giant hailstorm event of 2020 in Europe. A large...

The Visual Monitoring Camera (VMC) attached to Mars Express captured a mysteriously long, thin cloud over the 20 km (12 miles) high Arsia Mons volcano on July 17 and 19, 2020. According to ESA, the cloud is a recurrent feature made up of water ice and is influenced...

The severe flooding in Bihar, India, has claimed 36 lives in a 24-hour period to July 29, 2020, and has affected as many as 3.8 million people. The situation is expected to further deteriorate as several rivers flow above danger marks. According to national...