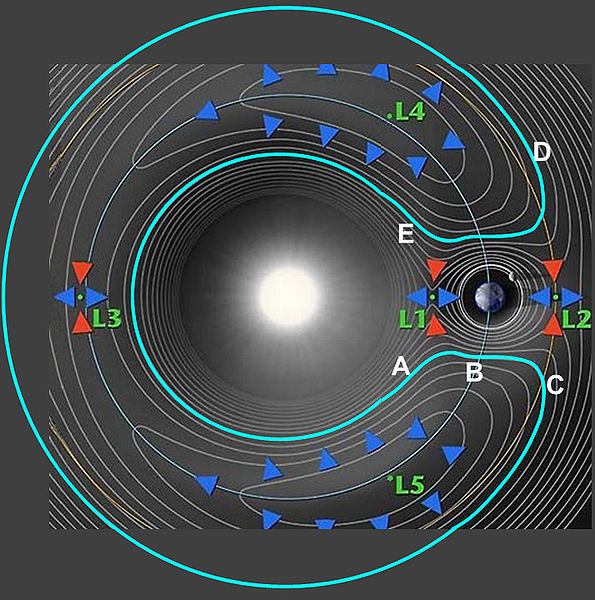 There are plenty of near-Earth asteroids out there, but this latest one studied by two researchers at Armagh Observatory in Northern Ireland is extremely rare in that it has a weird, horseshoe-shaped orbit. Not that Asteroid 2010 SO16 does an about-face and turns around in mid-orbit — no, the asteroid always orbits the Sun in the same direction. But because of its unique orbital path and the gravitational effects from both the Earth and the Sun, it goes through a cycle of catching up with the Earth and falling behind, so that from our perspective here on Earth, its movement relative to both the Sun and the Earth traces a shape like the outline of a horseshoe: it appears to approach, then shift orbit, and go farther away without ever passing Earth.

This asteroid was discovered on September 17, 2010 by the WISE Earth-orbiting observatory.

There are only a handful of other asteroids known to have a horseshoe orbit. But astronomers Apostolos Christou and David Asher say 2010 SO16’s absolute magnitude (H=20.7) makes this the largest object of its type known to-date. It is just a few hundred meters across, so the other asteroids are extremely small, and none of the other horseshoe asteroids have orbits that are likely to survive for more than a few thousand years. But the researchers did computer simulations of SO16’s orbit, which showed it could stay in its orbit for at least 120,000 years, maybe more.

For an asteroid to have such an orbit means it is in almost the same solar orbit as Earth, and both take approximately one year to orbit the Sun. 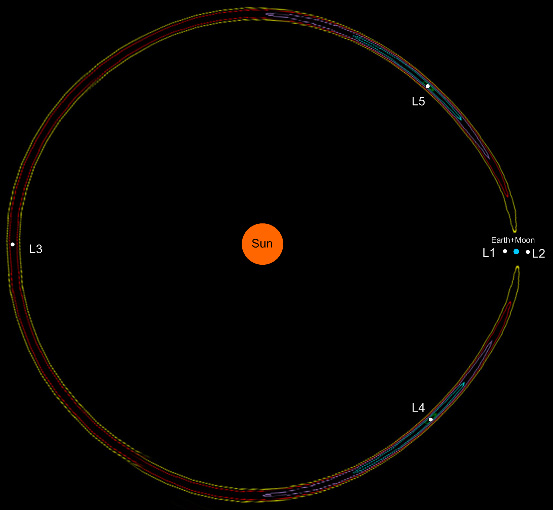 The Technology Review Blog explained it this way:

“Two points are worth bearing in mind. First, objects further from the Sun than Earth, orbit more slowly. Second, objects that are closer to the Sun orbit more quickly than Earth.

So imagine an asteroid with an orbit around the Sun that is just a little bit smaller than Earth’s. Because it is orbiting more quickly, this asteroid will gradually catch up with Earth.

When it approaches Earth, the larger planet’s gravity will tend to pull the asteroid towards it and away from the Sun. This makes the asteroid orbit more slowly and if the asteroid ends up in a orbit that is slightly bigger than Earth’s, it will orbit the Sun more slowly than Earth and fall behind.

After that, the Earth will catch up with the slower asteroid in the bigger orbit, pulling it back into the small faster orbit and process begins again.

Right now, SO16 is near one of its closest points of approach, chasing the Earth on its inside orbit. It will be tagging along near Earth for the next few decades until it is pulled all the way over into the outside orbit and it slowly recedes from view.

The researchers say the existence of this long-lived horseshoe raises the twin questions of its origin and whether objects in similar orbits are yet to be found. Additionally, they suggest that SO16 may be a suitable test target for the direct detection of the Yarkovsky acceleration as it makes frequent close encounters with the Earth during the next decade. (Earth Issues)

A horseshoe orbit appears when a viewer on an orbiting body (like Earth) watches the movement of another orbiting body, whose orbit is skinnier (more eccentric), but has about the same period. As a result, the path appears to have the shape of a kidney bean.

The loop is not closed but will drift forward or backward slightly each time, so that the point it circles will appear to move smoothly along Earth’s orbit over a long period of time. When the object approaches Earth closely at either end of its trajectory, its apparent direction changes. Over an entire cycle the center traces the outline of a horseshoe, with the Earth between the ‘horns’.