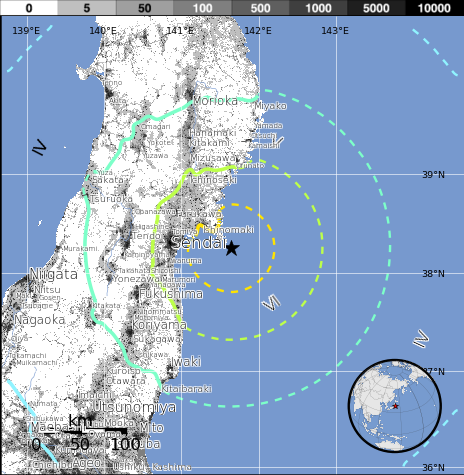 Strong 7,2 earthquake hit near east coast of Honshu at depth of 49km.

The April 7, 2011 earthquake near the east coast of Honshu, Japan occurred as a result of thrust/reverse faulting on or near the subduction zone plate boundary between the Pacific and North America plates. At the latitude of this earthquake, the Pacific plate moves approximately westwards with respect to the North America plate at a rate of 83 mm/yr, and begins its westward descent beneath Japan at the Japan Trench. Note that some authors divide this region into several microplates that together define the relative motions between the larger Pacific, North America and Eurasia plates; these include the Okhotsk and Amur microplates that are respectively part of North America and Eurasia.

This earthquake can be considered an aftershock of the March 11, 2011 Mw 9.0 Tohoku earthquake. The aftershock sequence of that event has been ongoing since March 11, and has included 58 earthquakes of M 6 or greater up until April 7 2011, two of which were greater than M 7 (M7.7 and M7.9, both on March 11). Over the two days preceding the March 11 earthquake, a series of large foreshocks had occurred, beginning on March 9th with a M 7.2 event approximately 40 km from the epicenter of the March 11 earthquake, and continuing with another three earthquakes greater than M 6 on the same day. Prior to March 9 2011, the Japan Trench subduction zone had hosted nine events of magnitude 7 or greater since 1973. (USGS) 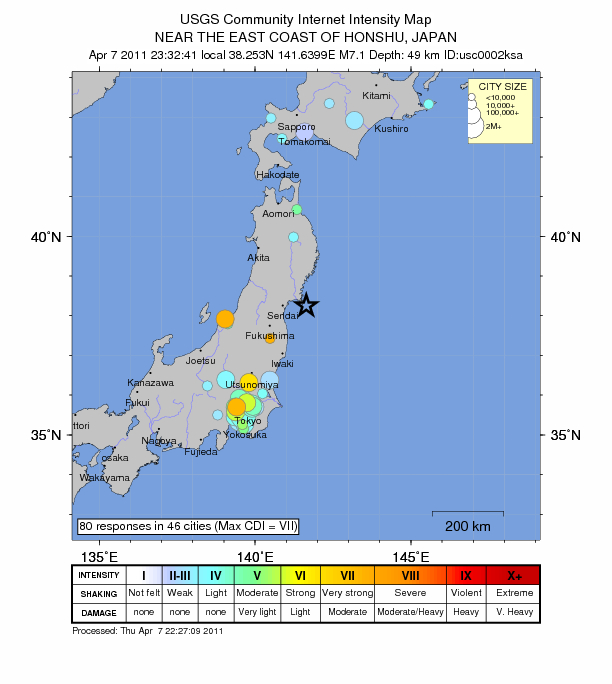 Tectonic summary of the March 11 event