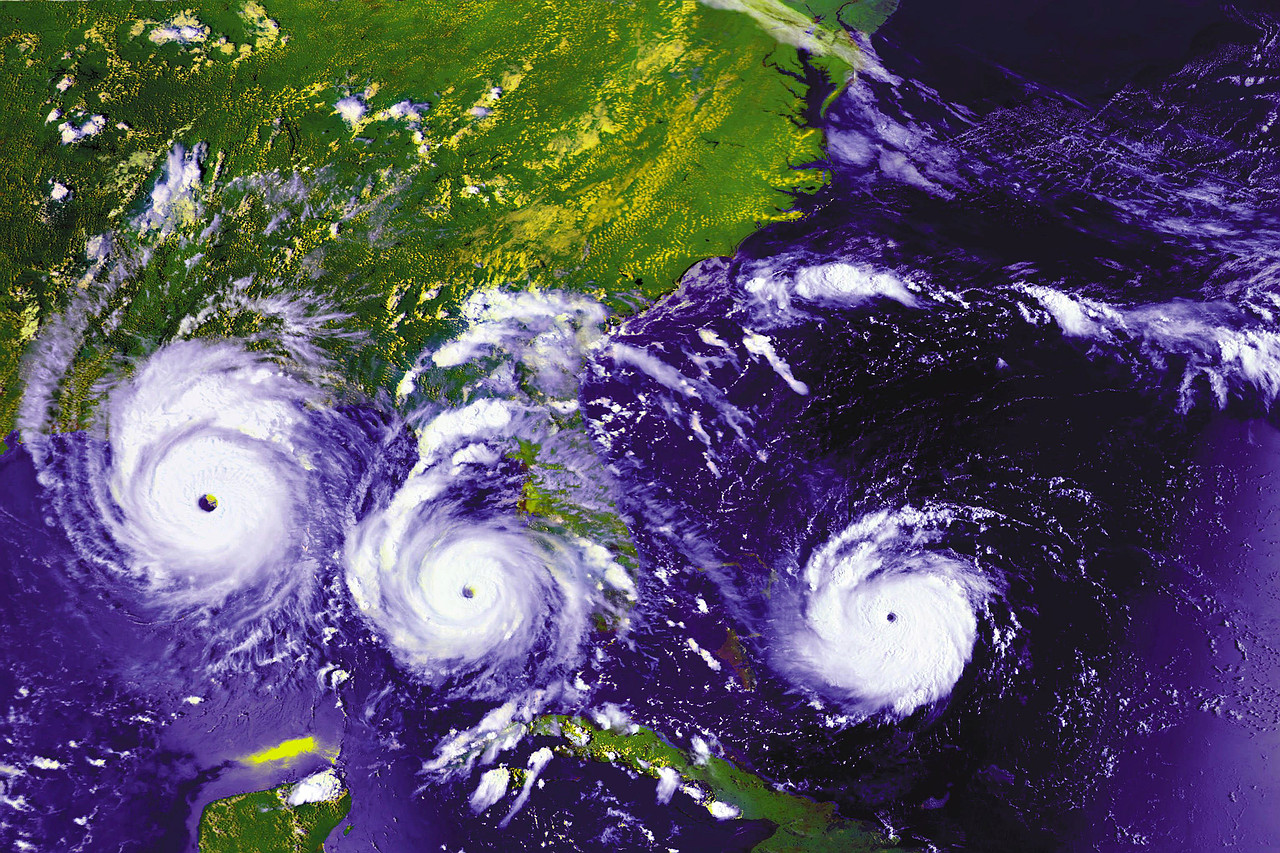 AccuWeather.com Hurricane Center meteorologists are predicting an active season for 2011 with more impact on the U.S. coastline than last year. The team is forecasting a total of 15 named tropical storms, 8 of which will attain hurricane status and 3 of which will attain major hurricane status (Category 3 or higher). In a normal year, there are 10 tropical storms, 6 of which become hurricanes and2 of which become major hurricanes, or attain winds that exceed 110 mph.

2010’s historic season had a total of 19 named storms and ranks as the third most active season on record, but there was little impact on the United States coastline. 12 of these storms became hurricanes, 5 of which were major hurricanes. Two names from the 2010 season were retired on March 16. In order to project the number of storms and impacts, the team looks at past years that have similar weather variables and patterns that closely resemble the most recent fall, winter and early spring months.

There are a number of physical drivers that have the team concerned for this upcoming hurricane season – the orientation and position of the Azores and Bermuda high-pressure areas in the Atlantic, the future state of the ongoing La Niña, the frequency and amount of dust that accompanies disturbances moving off the African coast, and a phenomenon known as Atlantic Multidecadal Oscillation (AMO). 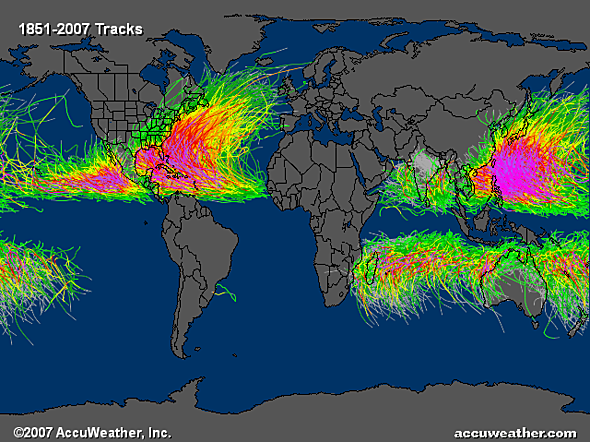 The Azores high is one of the bigger influences on the movement of tropical cyclones. High pressure systems alter the direction of a storm by steering the storm, a low pressure system, around it. This is one way forecasters can predict the track of a hurricane. The water temps are not nearly as warm as they were last year, and also the upper air pattern looks slightly different… than last year, so that could have an impact as to where that subtropical high, that big high pressure area that helps guide tropical storms, sets up. It may weaken or actually reposition itself a little bit to the northeast as we get later in the season, which would allow more of a storm track closer to Florida and also up the East Coast.

La Niña is a phenomenon that occurs when the surface waters in the central and eastern equatorial Pacific are colder than normal. La Niña results in low wind shear, especially in the main tropical development area in the Atlantic. Shear refers to strong winds that are high in the atmosphere. Wind shear is a “hurricane killer,” in that it can hinder storm development as well as break up existing storms. The signal is starting to show some signs of going neutral. That could have an impact on the westerly wind component down in the tropical Atlantic as well as the Caribbean. Stronger westerlies would prohibit major storms or a lot of storms, so it is a critical factor.

The presence of dust indicates dry air, which can hinder tropical development in the eastern Atlantic. Current projections on the weather pattern over Africa for this coming tropical season suggests there will be episodes of dust affecting development, but no more than normal.

As with most Atlantic hurricane seasons, the areas where storms are most likely to make landfall shift as the season progresses. This year, the early season threat area will be the western Gulf of Mexico and the southern portion of the Caribbean. Within this zone, the higher concern for landfalls will be along the Texas and Louisiana coastlines. As for the mid-to-late season zones, the eastern Gulf and Caribbean will be the focus. The higher concern areas will be the Florida Peninsula to the Carolinas. Another mid-to-late season concern for landfalls will be northern New England and the Canadian Maritimes. (AccuWeather) 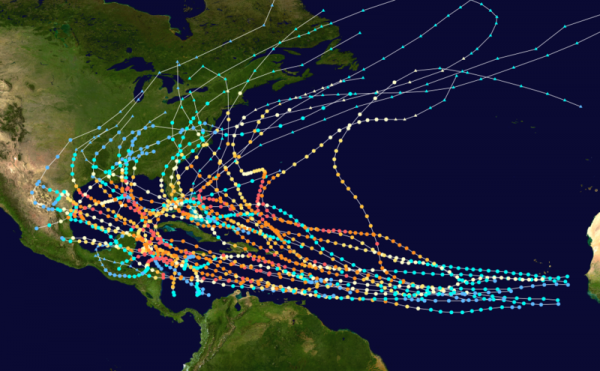 Hurricanes are by far most common in the Pacific Ocean, with the western Pacific being most active. In some years, the Philippines are struck by more than 20 tropical storms and typhoons. The term applied to various storms depends on their location. Only one hurricane force storm has ever occurred in the South Atlantic – Hurricane “Catarina” in 2004.

When hurricanes strike is also determined by location. Here is a brief description of each basin’s “hurricane season.”

ATLANTIC: Hurricane season in the Atlantic runs from June 1 to November 30. Storms outside of these dates are not unheard of. As you can see from the graph, based on the average of 150 years of storms, activity ramps up in August, and peaks once in early September, then again in October. More statistics are available here. Persons traveling to areas near the Atlantic Basin should exercise caution during the entire Hurricane Season. 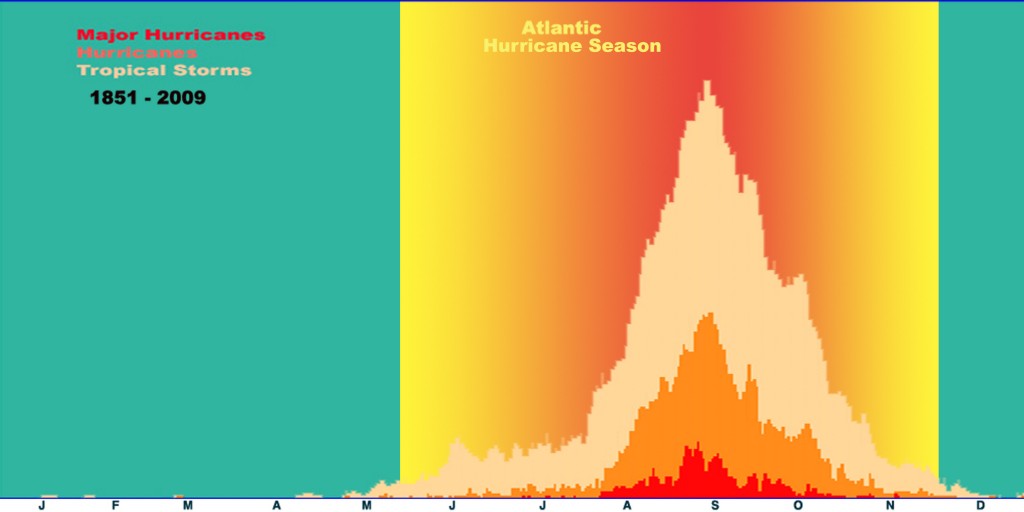 WESTERN PACIFIC: The Western Pacific basin’s hurricane season is mostly from July 1 to November 30, peaking in late August or early September, though storms can occur year-round.

SOUTH PACIFIC: The South Pacific basin’s hurricane season is from October 15 to May 15, reaching a peak in late February or early March. 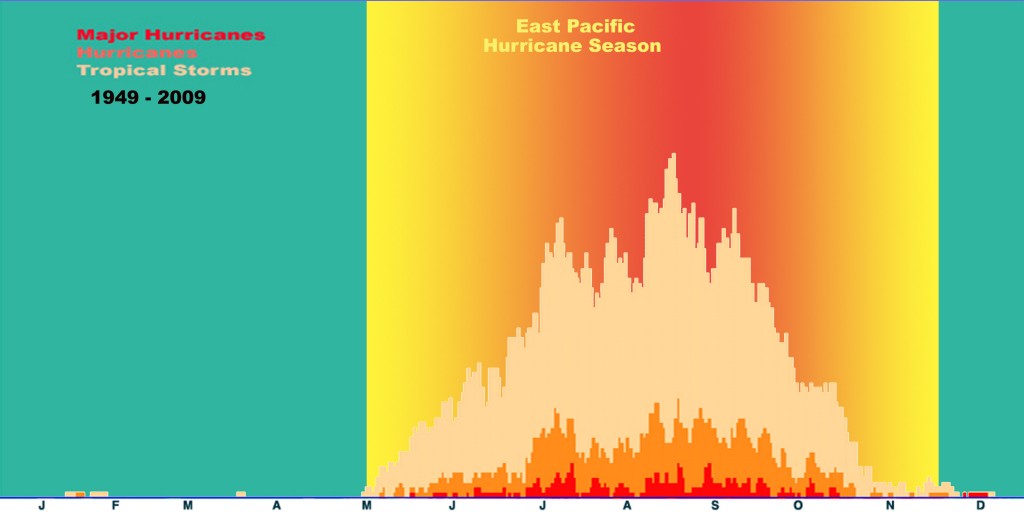 EASTERN PACIFIC: The Eastern Pacific basin’s hurricane season is from May 15th to November 30th, peaking in late August or early September.

INDIAN OCEAN: The Indian basin’s hurricane season is from April 1 to December 31 for the northern Indian Ocean, and from October 15 to May 31 in the southern region.

To qualify as a Category 5 hurricane on the Saffir-Simpson hurricane intensity scale, maximum sustained winds must exceed 155 mph (135 kt). Through 2008, only 32 Atlantic storms have reached this intensity. 2005 was by far the most popular year for Category 5 storms, with Emily, Katrina, Rita and Wilma (of course, 2005 was a record year in many respects