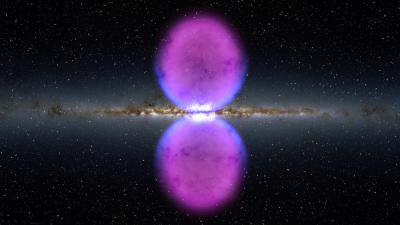 NASA’s Fermi Gamma-ray Space Telescope has unveiled a previously unseen structure centered in the Milky Way – a finding likened in terms of scale to the discovery of a new continent on Earth. The feature, which spans 50,000 light-years, may be the remnant of an eruption from a supersized black hole at the center of our galaxy.

“What we see are two gamma-ray-emitting bubbles that extend 25,000 light-years north and south of the galactic center,” said Doug Finkbeiner, an astronomer at the Harvard-Smithsonian Center for Astrophysics (CfA) in Cambridge, Mass., who first recognized the feature. “We don’t fully understand their nature or origin.”

At more than 100 degrees across, the structure spans more than half of the sky, from the constellation Virgo to the constellation Grus. It may be millions of years old. A paper on the findings will appear in an upcoming issue of The Astrophysical Journal.

Finkbeiner and Harvard graduate students Meng Su and Tracy Slatyer revealed the bubbles by processing publicly available data from the satellite’s Large Area Telescope (LAT). Their work expanded on previous studies led by Greg Dobler at the Kavli Institute for Theoretical Physics in Santa Barbara, California. Fermi’s Large Area Telescope is the most sensitive and highest-resolution gamma-ray detector ever orbited. Gamma rays are the highest-energy form of light.

The structures eluded previous astronomers studying gamma rays due in part to the so-called diffuse emission – a fog of gamma rays that appears all over the sky. The emissions are caused by particles moving near the speed of light interacting with light and interstellar gas in the Milky Way. (EurekAlert!) 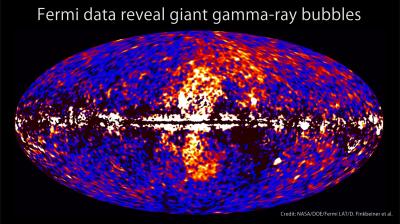 A recent study has shown that the X-ray emission was likely caused by an outburst powered by the supermassive black hole located in the white region in the center of the galaxy. Evidence for this idea comes from the elongation of the X-rays running from the top left to the bottom right and details of the X-ray spectrum. There are also signs of interactions between a central source and the surrounding gas, particularly the yellow arc of H II emission located above and to the left of the black hole.

Two different scenarios to explain the X-ray emission have been proposed. One possibility is that the central black hole was growing much more quickly about 25,000 years ago (in Earth’s time frame) and the radiation from the material falling onto the black hole was so bright that it stripped electrons away from the atoms in the gas in its path. X-rays were then emitted when electrons recombined with these ionized atoms. (Chandra)

NGC4151: An Active black hole in the “Eye of the Sauron” (Chandra.Harvard)
Unraveling the Nature of Unidentified High Galactic Latitude Fermi/LAT Gamma-Ray Sources With Suzaku (AdSabsHarvard)