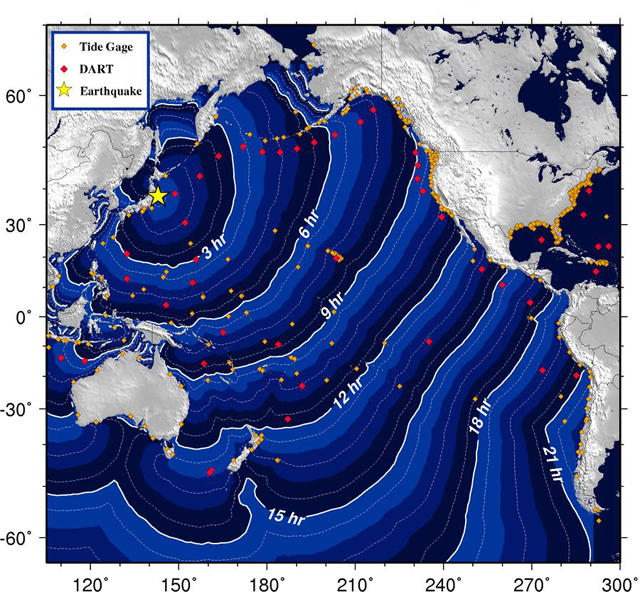 The threat of a tsunami prompted the U.S. National Weather Service to issue a warning for at least 20 countries and numerous Pacific islands after an 8.9-magnitude earthquake struck Japan Friday.

The wide-ranging list includes Russia and Indonesia, Central American countries like Guatemala, El Salvador and Costa Rica and the U.S. state of Hawaii. The weather service’s bulletin is intended “as advice to government agencies.”

The quake, which struck near the coast of Honshu on Friday afternoon unleashed a wall of water that rushed in toward land, leveling houses and cars in its path.

Authorities in the U.S. territory of Guam said a tsunami could hit the island as early as 7:09 p.m. (4:09 a.m. ET). Sirens sounded in Hawaii around 10 p.m. Thursday (3 a.m. ET), warning residents they could expect tsunami waves five hours later.

In the Philippines, the government has evacuated 20 coast areas. A tsunami could could hit by 6 p.m. (5 a.m. ET), it said.

Meanwhile, the regional government in eastern Taiwan’s Taitung county canceled classes and work, but did not immediately begin evacuations.

Russia’s emergency situations ministry said more than 11,000 people living in dangerous areas had been evacuated after a tsunami warning was issued for the Kuril Islands. Ships docked in open ports were heading back out to sea to avoid being hit by tsunami waves, the ministry said.

Chip McCreary of the Pacific Tsunami Warning Center said officials estimated the quake was already causing waves with magnitudes of up to 2 meters above normal sea level.

“This is a very large earthquake. We’ve evaluated it as about the same size as the earthquake last year in Chile. However, it’s much closer to the Hawaiian islands than the Chile earthquake,” he said.

Numerous Pacific islands, including some U.S. territories, are also on the list.

Friday’s 8.9-magnitude temblor in Japan was the largest earthquake since a 9.0-magnitude earthquake struck the Banda Aceh area of Indonesia on Dec. 26, 2004, causing a massive tsunami that killed about 250,000 people in 14 countries and washed away entire communities. The tsunami caused nearly $10 billion in damage and more casualties than any other tsunami in history, according to the United Nations.

Tsunami waves can travel at speeds of 800 kilometers per hour. The earthquake, initially reported as a 7.8 earthquake, was upgraded to an 8.9 quake.

“When you jump a magnitude from 7 to 8, it’s not 10 times stronger, it’s a 1000 times stronger,” said CNN International meteorologist Ivan Cabrera. “With an … earthquake that shallow, that close to shore, there will be more than one tsunami.”