The National Weather Service issued a tornado warning for the area at 9:40 a.m. (10:40 a.m. EST). Earlier Wednesday, three suspected tornadoes hit the New Orleans area the morning after Mardi Gras. Severe thunderstorms, with tornadoes reported, began Tuesday in northeastern Texas and moved into Arkansas, Louisiana and Mississippi overnight. Tornadoes will continue to be a threat as the storms advance through the Florida Panhandle and southern Alabama and Georgia Wednesday. 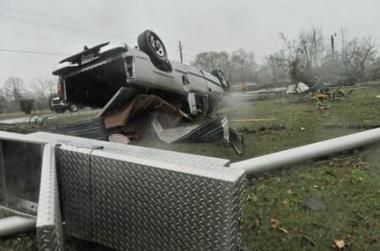 The threat for severe thunderstorms continues along the Gulf Coast through this evening, after nearly a dozen tornadoes were reported in Louisiana, Alabama, Florida and Georgia this morning and afternoon. A hurricane-force wind gust of 77 mph was measured at New Orleans International Airport as the thunderstorms blasted through. In just a half an hour, 3 inches of rain fell.

Two dams in North China's Inner Mongolia collapsed on Sunday, July 18, 2021, after heavy rains falling since Saturday. Local citizens were evacuated before the collapse and while material damage is huge, there are no reports of casualties. The combined water...

Farmers across Brazil are reporting widespread crop loss due to severe frosts affecting the country over the past 3 weeks. After several destructive cold waves, another blast is expected over the weekend, July 24 and 25, followed by yet another at the end of the...