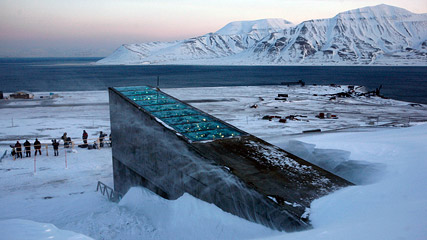 Farmers from Australia are the latest donors to a polar bear-patrolled Arctic doomsday vault that stores seeds as insurance against an international food emergency.

The Svalbard Global Seed Vault, a converted mine, is located about 800 miles from the North Pole in Arctic Norway. An Australian delegation of farmers and scientists next week will deposit 301 samples of peas and 42 rare chickpeas in the vault, intending to protect the plant species from extinction by climatic or man-made events.

“It’s a very robust structure, concrete, made into the side of a mountain at Svalbard in the Spitsbergen Highlands in the Arctic,” said Dr. Tony Gregson, a farmer and scientist with Plant Health Australia, an agriculture industry body. According to the Svalbard Global Seed Vault website, the facility’s main purpose is “to store duplicates (‘back ups’) of all seed samples from the world’s crop collections.

Permafrost and thick rock ensure that, even in the case of a power outage, the seed samples will remain frozen.” “It’s as safe as any place on earth, actually,” Gregson said. “It’s built deliberately 60 meters above current sea level, which is above any predicted sea level rise, built into solid rock. “It’s in permanent permafrost, so the temperature will never rise above about minus 20 degrees Celsius (minus 4 degrees Fahrenheit) and it is patrolled by polar bears. As far as we can tell, it is the safest place on earth.”

National emergency due to serious human rights abuse and corruption around the world, U.S.

Over 9.1 billion tons of plastic have been produced and most of it thrown away