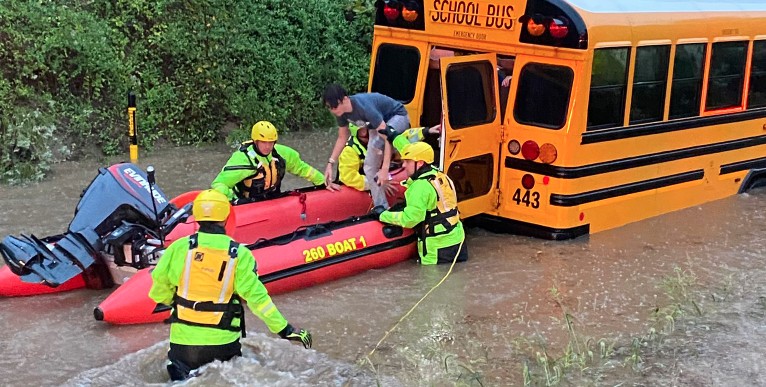 Remnants of Hurricane "Ida" — which made landfall in Louisiana on August 29 with maximum sustained winds of 240 km/h (150 mph)1 — inundated parts of the U.S. Northeast and spawned large and extremely dangerous tornadoes on September 1 and 2, 2021.

"Please stay off the streets tonight and let our first responders and emergency services get their work done. If you’re thinking of going outside, don’t. Stay off the subways. Stay off the roads. Don’t drive into these heavy waters. Stay inside."

"I have never seen this much rainfall this quickly. It is absolutely astounding … We are talking 3 inches, 4 inches [75 – 100 mm] in an hour. Unbelievable accumulation," DeBlasio told WCBS.4

"We are seeing way too many reports of water rescues and stranded motorists. Do not drive through flooded roadways. You do not know how deep the water is and it is too dangerous," the National Weather Service (NWS) in New York said.

"For clarity on the difference between a regular Flash Flood Warning and the Flash Flood Emergencies we've issued earlier tonight… This was an exceedingly rare event with 150 – 250 mm (6 – 10 inches) of rainfall falling over a several-hour period. Take these warnings (and emergencies) seriously!!"

The NWS recorded 80 mm (3.15 inches) of rain in Central Park in one hour, surpassing the 49.2 mm (1.94 inches) that fell in one hour during Tropical Storm "Henri" on August 22, which was believed at the time to be the most ever recorded in the park.

Radar loop of the 4 long, devastating days of Hurricane #Ida in the US.

From rapid intensification in the Gulf of Mexico 2nd most intense hurricane to make landfall in Louisiana on record catastrophic flash flood & tornado outbreak in the Northeast.

Queens Boulevard in Maspeth/Corona is a literal river at the moment. Bus fully flooded driving through, multiple cars stuck in the water. Absolutely insane. pic.twitter.com/LuSL9uWCEl

#NYFD out here rescuing people from the iddle@of this flooded intersection in #brooklyn #ida pic.twitter.com/k9kCTEhUhq

The mayor of Harrison Township, New Jersey, spoke to The Weather Channel1 late Wednesday night about the tornado damage in Mullica Hill, Gloucester County where some homes were left in splintered ruin.

"We have several residents who have been in the path directly and therefore had their owns home leveled and others in close proximity with hardly any damage at all," Mayor Lou Manzo said. "There were a few that needed to be rescued for lack of a better term from their home because they had sheltered in the basements and the entire foundation of their house had shifted or had come down. We are only by the grace of god lucky enough to this point that there was only one injury that required going to the hospital."

More of the damage in Mullica Hill on Marvin Lane. ⁦@NBCPhiladelphia⁩ pic.twitter.com/xPV038CNnp

At least 100 homes were severely damaged after a tornado hit Edgewater, Maryland. The tornado moved through the Annapolis area, ripping off roofs, knocking down trees, and taking down power lines.

The police said parts of West Street and Forest Street will be closed for an extended period of time, and urged residents to avoid travel.

Getting some photos of the Annapolis tornado damage. The roadway is West St. The house is Edgewater pic.twitter.com/YEIEK9YbCB

Footage of the Annapolis MD tornado is nuts. You don't see tornadoes this destructive on the east coast all that often.

Near Pittsburgh, the Cherry City Volunteer Fire Company rescued 41 passengers from a school bus that got stuck on a flooded road Wednesday morning.5

Crews have been spending the morning performing water rescues. 260 boat rescued 41 passengers from the school bus and 10 more from homes that took on water rapidly. pic.twitter.com/ZDsfipEKAg

Busy day for Fire crews in Millvale and Shaler pic.twitter.com/jiYfJkkL4i 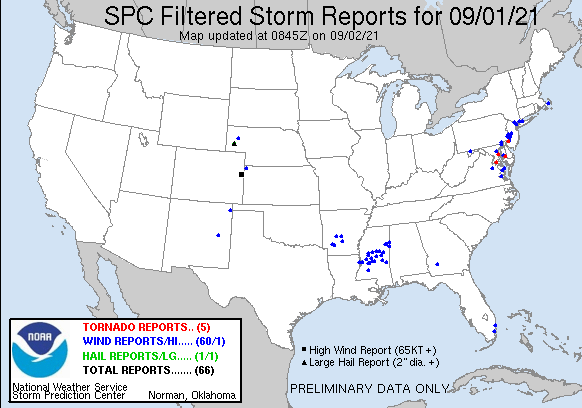 Meanwhile, 914 000 customers are still without power in Louisiana, down from 1.1 million on Sunday.1

At least 7 people have been killed and one is missing, according to information received early Thursday morning, September 2.

The death toll rose to 46 by early Friday morning, September 3. Most of the deaths took place in New Jersey (23) and New York City (15). At least 4 deaths have been reported in Pennsylvania.

The death toll rose to 71 by September 7.