After reports of increased seismicity and light emissions at Pagan volcano, Mariana Islands1 at the end of July 2021, low-level volcanic gas and ash emissions were observed on September 1, prompting NMI/USGS to raise the Aviation Color Code to Orange and the Volcano Alert Level to Watch. The previous eruption of this volcano took place in 2012 (VEI 2).

A continuous plume from the summit extended up to 150 km (93 miles) to the northwest and southwest of the volcano at an altitude of 3 km (10 000 feet) above sea level for most of the day.

Emissions ceased at 13:00 UTC September 1 but may resume with little warning, NMI said.2

Mount Pagan, one of two volcanoes that make up Pagan Island, is located on the northern end of the Island and is one of the most historically active volcanoes in the Northern Mariana Islands.

The last large eruption (VEI 4) of the volcano was in 1981, followed by three and a half decades of intermittent activity. Recent activity prior to 2016 was characterized by vigorous steam plumes and degassing from a shallow magma source. 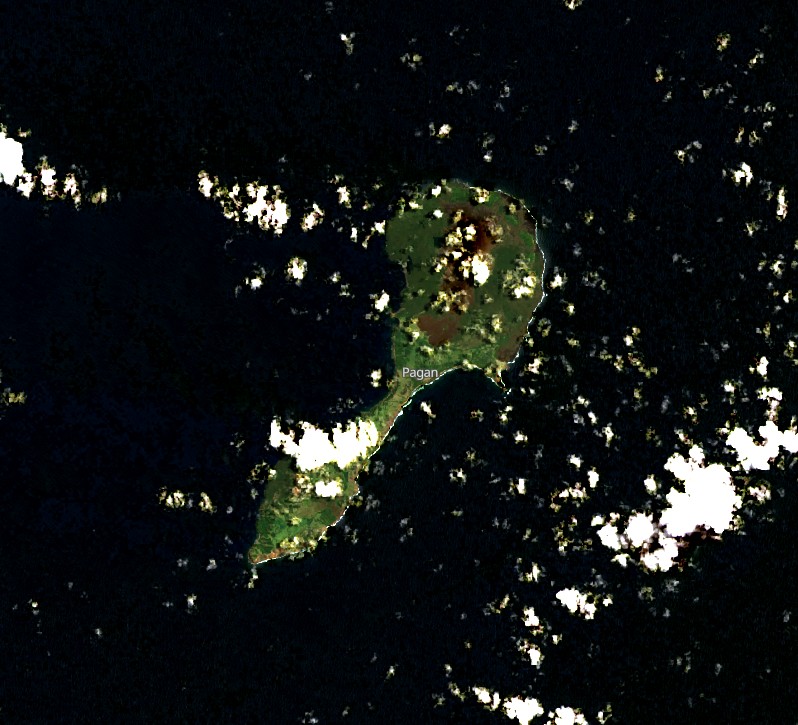 Pagan Island, the largest and one of the most active of the Mariana Islands volcanoes, consists of two stratovolcanoes connected by a narrow isthmus. Both North and South Pagan stratovolcanoes were constructed within calderas, 7 and 4 km (4.3 and 2.5 miles) in diameter, respectively.

North Pagan at the NE end of the island rises above the flat floor of the northern caldera, which may have formed less than 1 000 years ago.

South Pagan is a stratovolcano with an elongated summit containing four distinct craters.

Almost all of the recorded eruptions, which date back to the 17th century, have originated from North Pagan. The largest eruption during historical time took place in 1981 and prompted the evacuation of the sparsely populated island.3