Tropical Cyclone "Guambe" formed in the Mozambique Channel on February 17, 2021, as the 8th named storm of the 2021/21 Southwest Indian Ocean cyclone season. Although Guambe is expected to stay about 100 km (62 miles) off the coast of Mozambique, significant impacts are expected in southern Mozambique on Friday and Saturday, February 19 and 20, 2021, between Inhambane and Xai-Xai. Heavy rains that can reach and locally exceed 150 mm (5.9 inches) in 24 hours are possible in these areas. Strong winds gusting up to 100 km/h (62 miles) on the coast are possible from Friday. A red warning for heavy rain, strong winds, and thunderstorms has been issued for areas in Sofala and Inhambane provinces.

The storm had a maximum average 10-minute wind speed of 140 km/h (85 mph) and a central pressure of 963 hPa, according to the RSMC La Reunion.

Over the past 6 hours, Guambe's eye pattern has gradually improved on infrared and visible satellite images, with a small eye, the center said in a bulletin released at 06:00 UTC today.

These data confirm the presence of a well-consolidated cyclonic core, which is probably in a rapid intensification process. 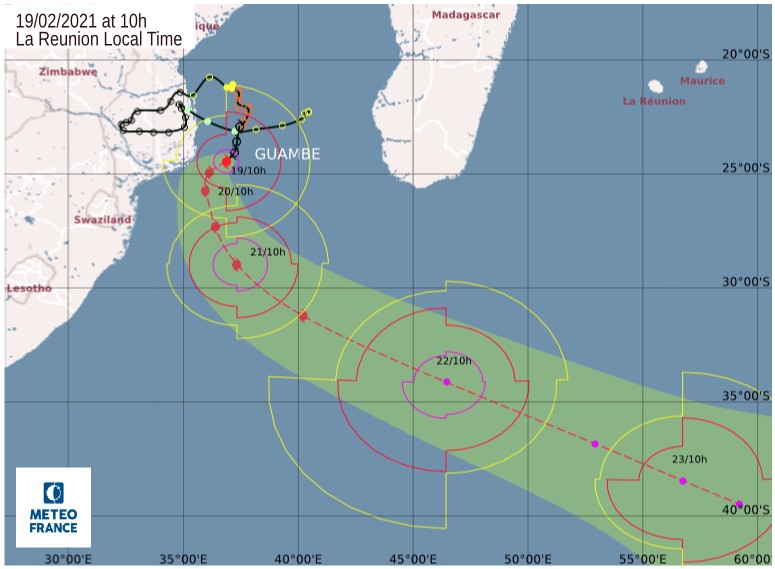 According to most NWP models, the steering flow should then take a north to northwest turn from Saturday onwards, under the influence of the subtropical ridge to the east of the system and an approaching mid-latitude trough from the south.

This should keep Guambe away from the coast of Mozambique.

Over the weekend, the presence of the deep mid-latitude talweg to the south should accelerate Guambe's movement south-eastwards, but the timing of this remains uncertain from Sunday onwards.

The favorable oceanic and atmospheric environment as well as the small size of the cyclone's core favor a rapid intensification of Guambe in the short run, making it probably reaching the stage of intense tropical cyclone by Friday evening.

From Saturday onwards, despite the still favorable environmental conditions, the occurrence of an eyewall replacement cycle (ERC) is likely by Sunday, which could limit its intensity. 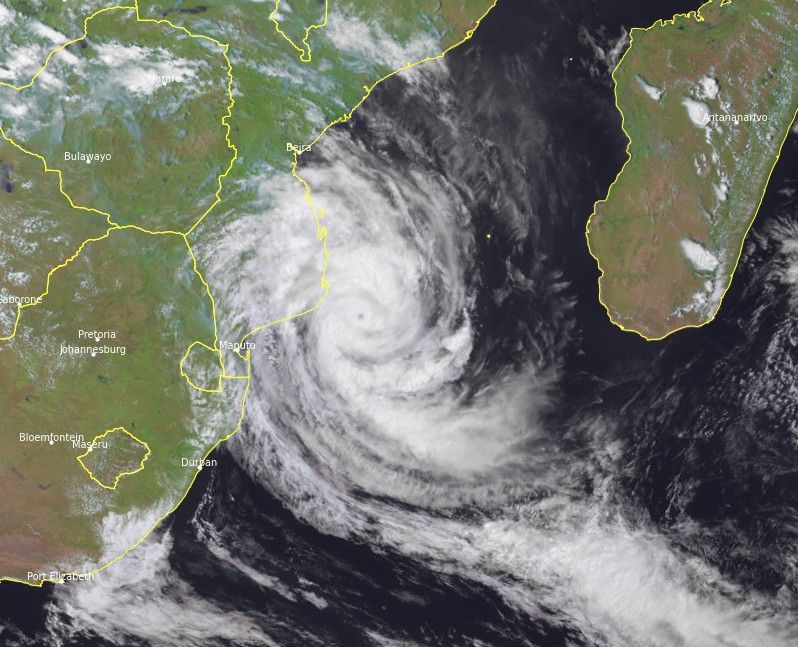 However, given the low predictability of cyclone intensity in this type of context, this forecast does not take full account of it, the center said.

On the edge of the mid-latitude trough, the northwesterly shear should gradually strengthen, leading to the weakening of the system by 06:00 UTC on February 22.

As with the track, the system's increasingly rapid speed of movement in the direction of the shear maintains uncertainty about the timing of its weakening.

Even if the present forecast takes Guambe about 100 km (62 miles) off the Mozambican coast, Guambe is likely to significantly impact the weather conditions in southern Mozambique on Friday and Saturday between Inhambane to the north and Xai-Xai to the south.

Heavy rains that can reach and locally exceed 150 mm (5.9 inches) in 24 hours are possible in these areas. Strong winds gusting up to 100 km/h (62 miles) on the coast are possible from Friday.