The magnetic north pole, where a compass needle points to, does not have a permanent location. Instead, it wobbles around close to the geographic north pole, the point around which the Earth spins due to movements within the Earth's core.

For reasons that are yet to be understood, magnetic pole movements can be more extreme than a wobble at times. One of the most dramatic movements — the Laschmps Excursion, took place around 42 000 years ago.

To study what happened during that time, the scientists analyzed ancient New Zealand kauri trees that had been preserved in peat bogs for more than 40 000 years.

Using the yearly growth rings, the researchers were able to produce a detailed timescale of how the Earth's atmosphere changed over this time. The trees revealed a prolonged spike in the radiocarbon levels in the atmosphere caused by the collapse of the magnetic fields as the poles switched.

"The kauri trees are like the Rosetta Stone, helping us tie together records of environmental change in caves, ice cores, and peat bogs around the world," said lead author Alan Cooper. 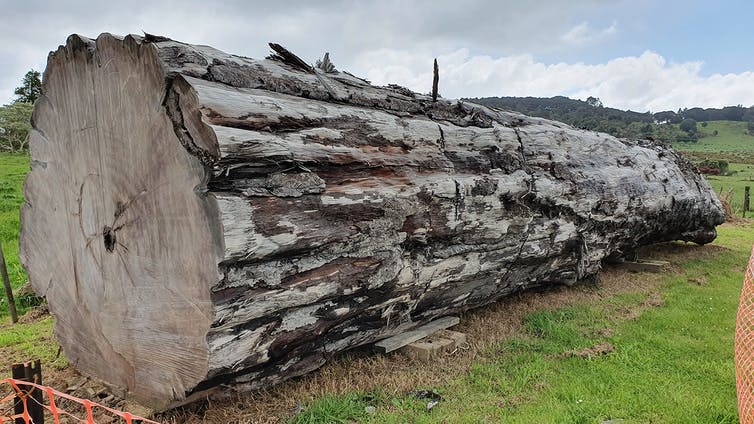 Using the new timescale, the authors were able to show that tropical Pacific rain belts and the Southern Ocean westerly winds suddenly shifted at the same time, bringing dry conditions to areas like Australia, during the same time as a range of megafauna and giant wombats went extinct.

Further north, the Laurentide Ice Sheet rapidly grew across the eastern U.S. and Canada, while the Neanderthals in Europe went into extinction.

The shifts may have caused synchronous global climate and environmental changes observed in other climate records that happened around 42 000 years ago.

The discovery that geomagnetic field fluctuations can impact atmospheric temperature and circulation on a worldwide scale may provide a model for understanding sudden and anomalous paleoenvironmental shifts, said the authors.

Geological archives record multiple reversals of Earth’s magnetic poles, but the global impacts of these events, if any, remain unclear. Uncertain radiocarbon calibration has limited investigation of the potential effects of the last major magnetic inversion, known as the Laschamps Excursion [41 to 42 thousand years ago (ka)]. We use ancient New Zealand kauri trees (Agathis australis) to develop a detailed record of atmospheric radiocarbon levels across the Laschamps Excursion. We precisely characterize the geomagnetic reversal and perform global chemistry-climate modeling and detailed radiocarbon dating of paleoenvironmental records to investigate impacts. We find that geomagnetic field minima ~42 ka, in combination with Grand Solar Minima, caused substantial changes in atmospheric ozone concentration and circulation, driving synchronous global climate shifts that caused major environmental changes, extinction events, and transformations in the archaeological record.