An international team of scientists published a new study providing the first-ever map of the groundwater recharge rates across Africa based on ground measurements. The study shows data about where groundwater exists and the rate at which groundwater is replenished, helping for effective governance and investment decisions in the continent.

Researchers from the British Geological Survey, the University of Nottingham, and universities in South Africa, Nigeria, and the U.S. have provided the first map of the rate groundwater reserves are being recharged across Africa based on ground measurements.

Groundwater, which is stored in rocks, is central to the food and water security of many communities. Groundwater recharge rates are a major factor in determining the sustainability of this resource, but until now, there was no mapping of the rates on a continental-scale across Africa previously.

The scientists developed a dataset of 134 existing recharge studies for the continent from 1970 to 2019 to develop a valuable resource that provides an overview of the recharge pattern.

The data were analyzed using a linear model, and the resulting dataset provided the first ground-based approximation of groundwater storage renewability in Africa.

"Consequently, quantifying the scale of groundwater recharge is critical to characterize the resilience of groundwater supplies to both increased use and climate change." 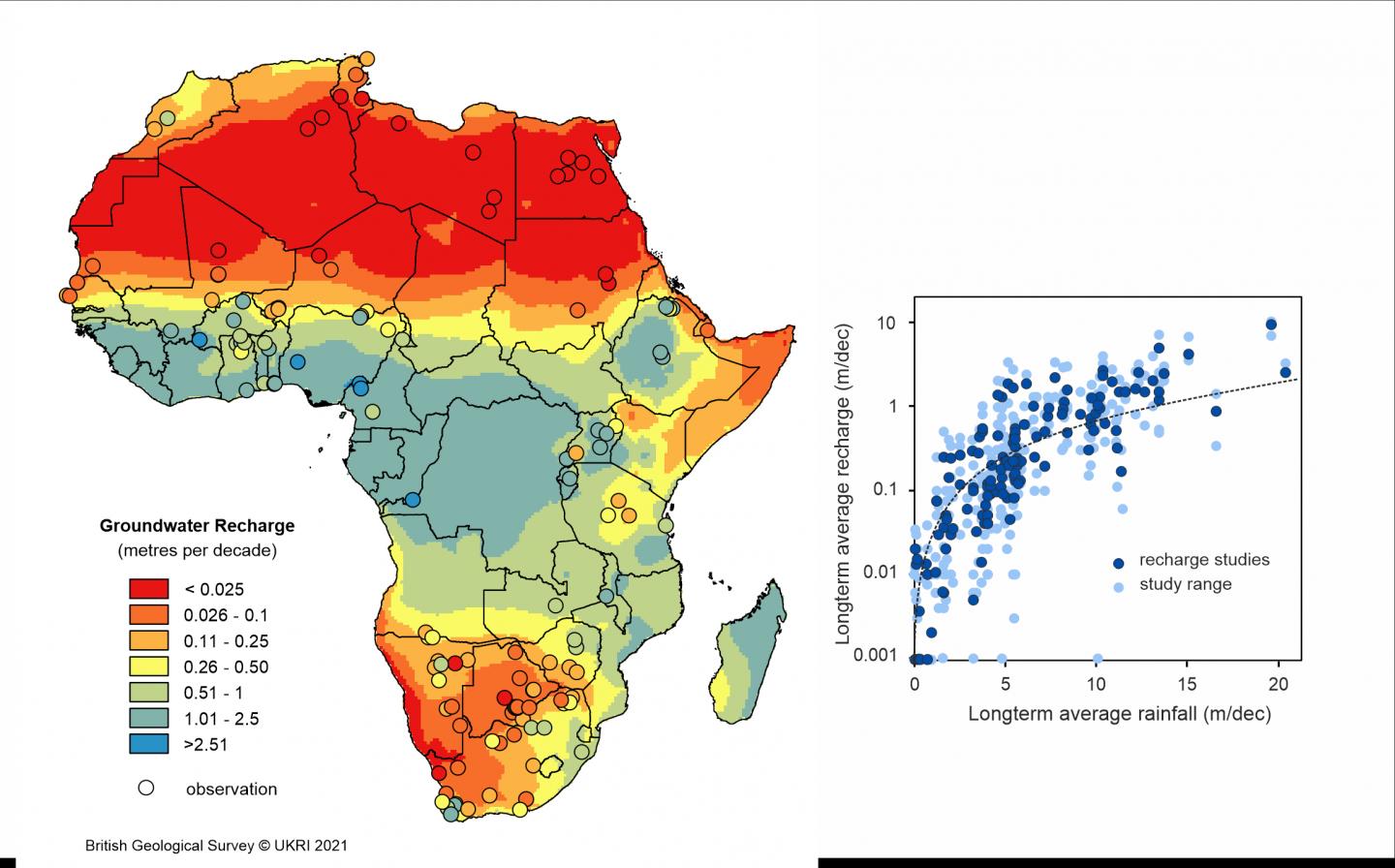 The authors noted that estimating groundwater recharge is difficult. "There is no one method that can directly quantify the volume of rainwater that reaches the water table," they wrote.

"So, the focus of the research has been to combine many different methods, each appropriate to the different environments in Africa, and then aggregate them using statistical techniques," the authors continued.

The findings show that long-term average rainfall predicts groundwater recharge at a continental scale, but there are differences at a local sale due to landcover, soil, and from year to year. About two percent of all groundwater storage is replenished every decade in Africa, and recharge can take place even in semi-arid areas.

The researchers hope that the maps will help show where there is potential to sustainably develop more groundwater, as well as where it could be ideal to invest effort in tracking groundwater that may be susceptible to depletion.

"Only if people pump out too much (for example for large-scale irrigation) will the groundwater be in danger of drying up during droughts."

Co-author and University of KwaZulu-Natal Professor Seifu Kebede also stated, "This effort brought together extensive African knowledge with expertise from other countries to provide information to sustainably develop water resources and overcome some of the most pressing issues countries often face, such as drought, deprivation, and starvation."

Groundwater forms the basis of water supplies across much of Africa and its development is rising as demand for secure water increases. Recharge rates are a key component for assessing groundwater development potential, but have not been mapped across Africa, other than from global models. Here we quantify long-term average (LTA) distributed groundwater recharge rates across Africa for the period 1970–2019 from 134 ground-based estimates and upscaled statistically. Natural diffuse and local focussed recharge, where this mechanism is widespread, are included but discrete leakage from large rivers, lakes or from irrigation are excluded. We find that measurable LTA recharge is found in most environments with average decadal recharge depths in arid and semi-arid areas of 60 mm (30–140 mm) and 200 mm (90–430 mm) respectively. A linear mixed model shows that at the scale of the African continent only LTA rainfall is related to LTA recharge—the inclusion of other climate and terrestrial factors do not improve the model. Kriging methods indicate spatial dependency to 900 km suggesting that factors other than LTA rainfall are important at local scales. We estimate that average decadal recharge in Africa is 15 000 km3 (4900–45 000 km3), approximately 2% of estimated groundwater storage across the continent, but is characterised by stark variability between high-storage/low-recharge sedimentary aquifers in North Africa, and low-storage/high-recharge weathered crystalline-rock aquifers across much of tropical Africa. African water security is greatly enhanced by this distribution, as many countries with low recharge possess substantial groundwater storage, whereas countries with low storage experience high, regular recharge. The dataset provides a first, ground-based approximation of the renewability of groundwater storage in Africa and can be used to refine and validate global and continental hydrological models while also providing a baseline against future change.