NASA's OSIRIS-REx (Origins, Spectral Interpretation, Resource Identification, Security, Regolith Explorer) has successfully descended down to just 75 m (246 feet) above the surface asteroid Bennu in a risky rehearsal to prepare the spacecraft before it collects a sample of ancient rock. The four-hour Checkpoint practice allowed the spacecraft to go through the first two of the sequence's four maneuvers, taking a step closer to touching down on the asteroid.

The spacecraft, which has been orbiting the asteroid since 2018, will attempt to touch down on the surface on August 25 to retrieve a sample of the rock and return to Earth in September 2023. The goal is to collect 60 grams (2.1 oz) of material in particles tinier than 2 cm (0.8 inches).

OSIRIS-REx did a series of rehearsal maneuvers in the previous weeks, with the most recent being the Checkpoint maneuver which brought the spacecraft to within 75 m (246 feet) over the site, Nightingale, at Bennu's surface. Past maneuvers were able to bring the spacecraft within 620 m (2 034 feet), then 250 m (820 feet).

"This rehearsal let us verify flight system performance during the descent, particularly the autonomous update and execution of the Checkpoint burn," said Rich Burns, the spacecraft's project manager at NASA's Goddard Space Flight Center in Maryland. 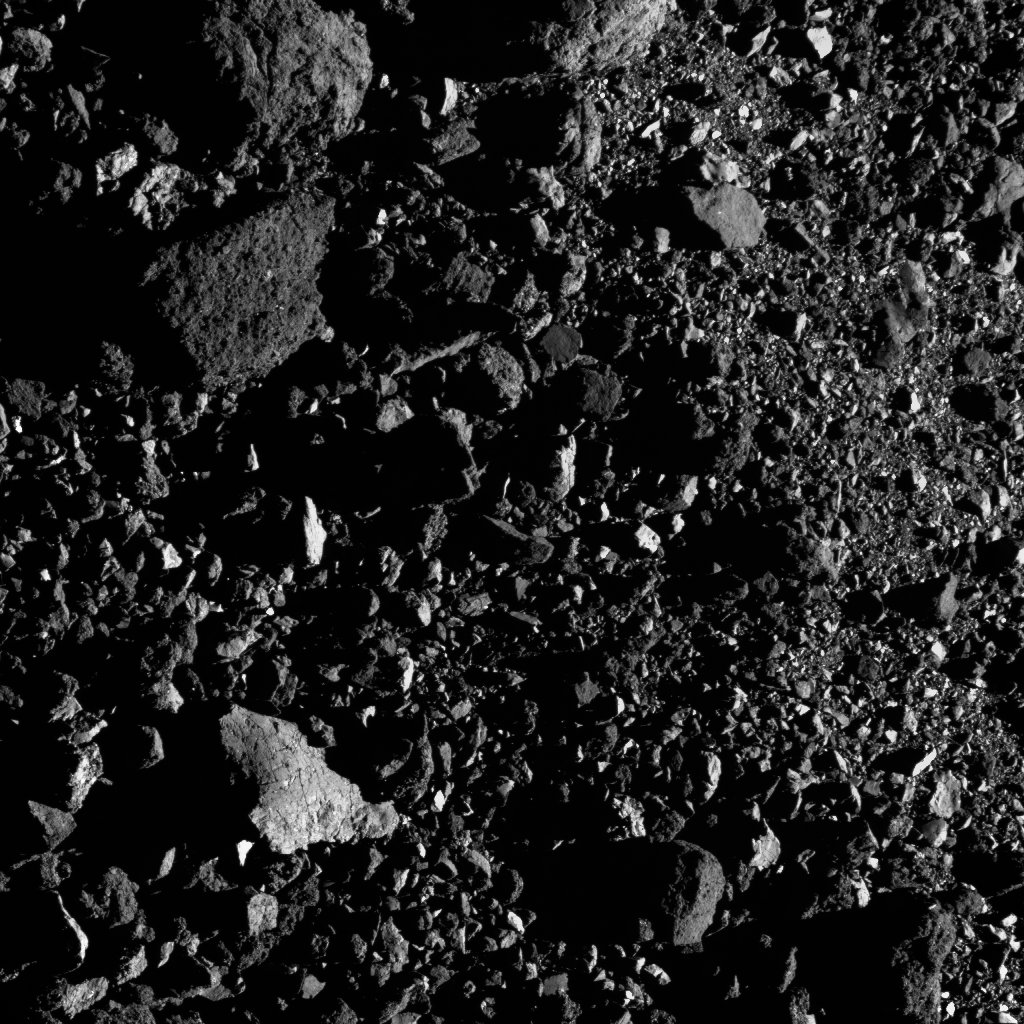 The image below shows the rocky region directly west of the crater where the sample site Nightingale is located on asteroid Bennu. This image was taken by the MapCam camera on NASA’s OSIRIS-REx spacecraft on April 14 from a distance of 500 m (0.3 miles).

The field of view is 37 m (121 feet). For reference, the bright rock in the lower left is 7.6 m (25 feet) long, which is about the length of an ambulance. The image was obtained during the mission’s Checkpoint Rehearsal.

When it was taken, the spacecraft was over the northern hemisphere, pointing MapCam nearly straight down and to the east. During the mission’s Orbital B phase, the PolyCam camera captured a high-resolution image of the same area: 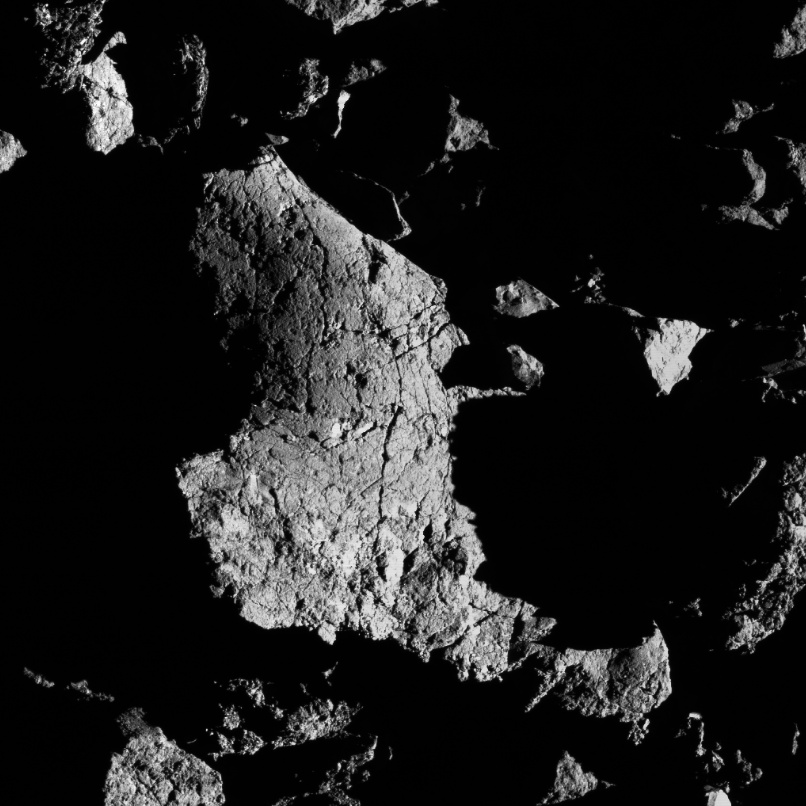 After departing its 0.6 miles (1 km) safe home orbit, OSIRIS REx performed the Checkpoint maneuver at an altitude of around 125 m (410 feet) above Bennu. The spacecraft continued to go down from there for another nine minutes on a trajectory toward the site of the third maneuver– the Matchpoint burn.

Upon reaching approximately 75 m (246 feet) altitude– the nearest it has ever been to Bennu– the spacecraft performed a back-away burn to conclude the rehearsal. 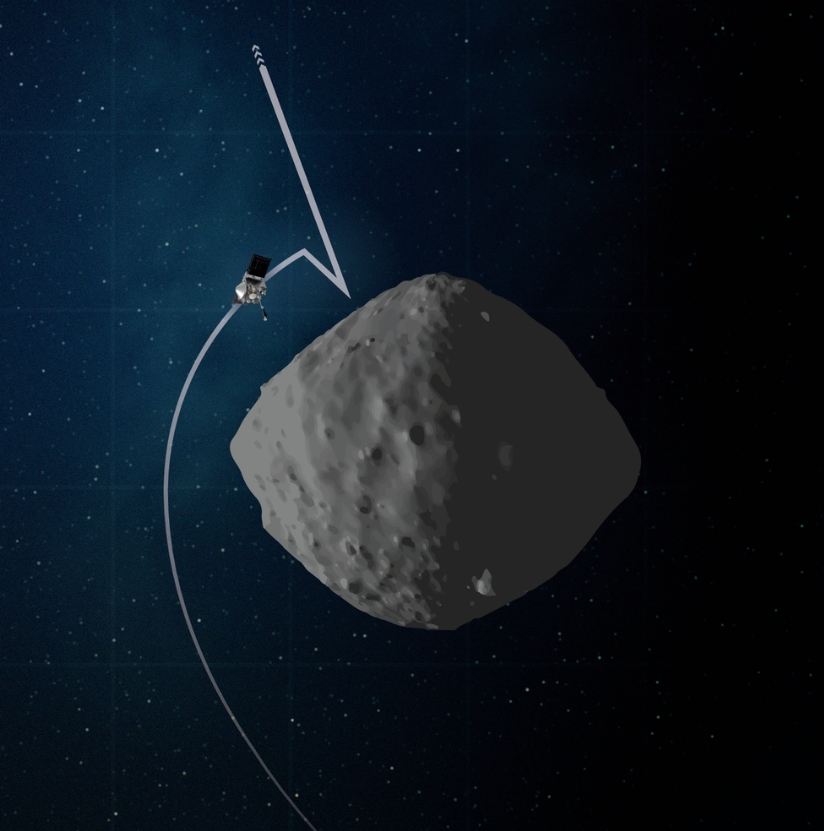 Artist's concept of the trajectory and configuration of OSIRIS-Rex during the Checkpoint rehearsal. Image credit: NASA/Goddard/University of Arizona 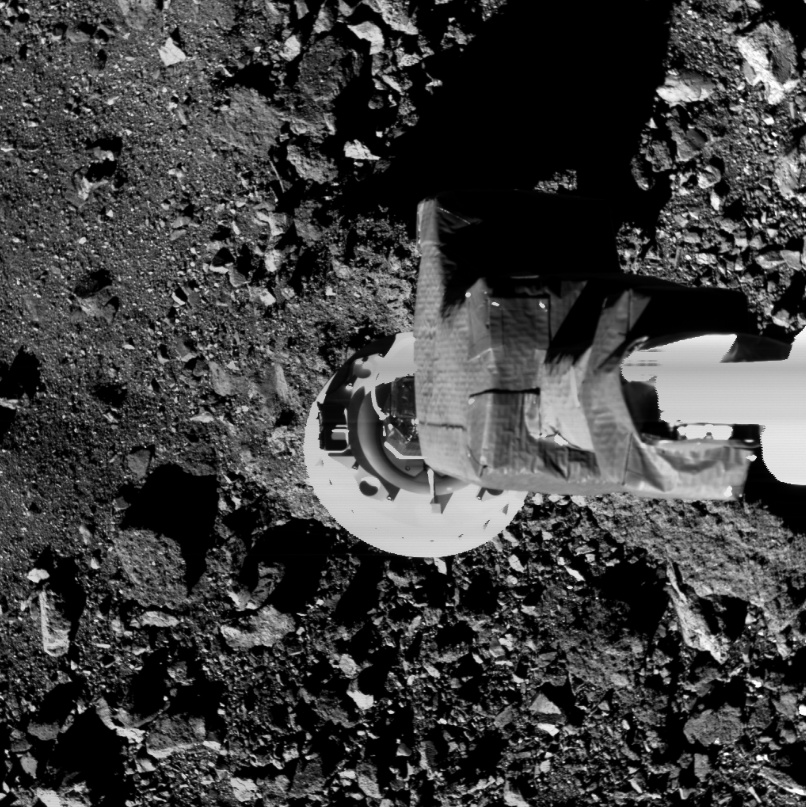 This image shows the OSIRIS-REx spacecraft’s sampling arm – called the Touch-And-Go Sample Acquisition Mechanism (TAGSAM) – and asteroid Bennu during the mission’s Checkpoint Rehearsal. Sample site Nightingale is visible in the left of the image frame, located in the relatively clear, dark patch. The image was taken by the SamCam camera on NASA’s OSIRIS-REx spacecraft on April 14 from a distance of 70 m (230 feet), which is the closest image of Bennu captured to-date. The field of view is 23 m (79 feet). For reference, the bright, rectangular boulder on the crater’s south rim (lower left) is 2.3 m (7.5 feet) long, which is about the size of a door. The TAGSAM head is 0.3 m (1 feet) wide. When the image was taken, the spacecraft was over the northern hemisphere, pointing SamCam straight down. Credit: NASA/Goddard/University of Arizona

OSIRIS-REx deployed its sampling arm– the Touch-and-Go Sample Acquisition Mechanism (TAGSAM), from its folded position out to the sample collection configuration. Some of its instruments also collected science and navigation images and did spectrometry observations of the site– as what will happen during the sample gathering event.

"Executing this monumental milestone during this time of national crisis is a testament to the professionalism and focus of our team. It speaks volumes about their ‘can-do’ attitude and hopefully will serve as a bit of good news in these challenging times," said Burns.