A rare tornado hit an area near the El Alto International Airport — the highest airport in the world at 4 058 m (13 313 feet) — in Bolivia on Sunday, December 8, 2019. This could be one of the highest-altitude tornadoes ever observed. Minor damages were reported as it moved along the northern periphery of the airport and into nearby neighborhoods.

Footage of the whirlwind showed debris flying, indicating that the circulating winds snaked all the way down to ground level.

This tornado could possibly be one of the highest-altitude tornadoes recorded worldwide. There is only limited data on such events, making it unofficially confirmed. In the US, for instance, no tornado has been recorded above the said height. A whirlwind that high required an unusual set of circumstances.

The climate in Bolivia is influenced by its topography. La Paz, the administrative capital of the country, is situated on the "Altiplano" which is a vast stretch of flat land. Although the altiplano is high in altitude, it still heats up beneath intense sunlight which favors rising air movement. Summer evenings over the high plains can feature big thunderstorm complexes west of the mountains.

However, getting one to produce a tornado is a different case.

Past data suggested that a subtle trough of low pressure was in the process of forming over central Chile and western Argentina from late Saturday, December 7, into early Sunday.

Large-scale temperatures in the country's mid to upper atmosphere were not overly conducive to severe weather– this signified that what happened came together on a local level. 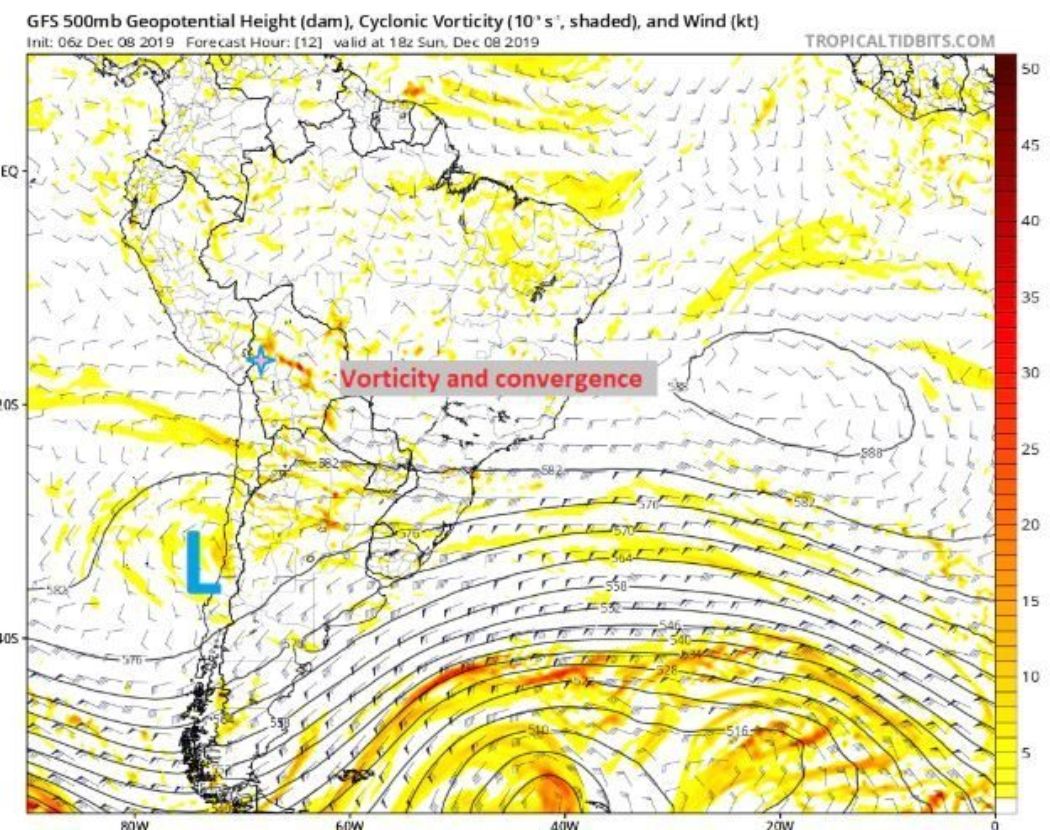 A weather map from the mid-levels of the atmosphere on Sunday. Image credit: TropicalTidbits.com

A ribbon of low-level colliding winds may have helped set up a localized boundary that could focus on storm development, which could also have helped thunderstorms rotate on a local level.

Lastly, a broad rotation over central/western Bolivia was recorded from Sunday night. There may have been a 'sneaky' surface low trying to form over the eastern altiplano, impacting low-level helicity.