For the first time since the improvement of the local seismic networks in the East Eifel region, Rhineland-Palatinate, Germany, scientists have detected and located recurrent deep low-frequency (DLF) earthquakes in the lower crust and upper mantle beneath the Laacher See Volcano (LSV), using a joint data set of permanent sensors and a temporary deployment. DLF microquakes suggest mass transport in the volcanic plumbing system and used to infer feeding channels from and into magma reservoirs.

So far, eight DLF earthquake sequences were observed in four distinct clusters at depths between 10 and 40 km (6.2 – 25 miles), scientists report in a study published recently in the Geophysical Journal International.

These clusters of weak events (ML< 2) align along an approximately 80° southeast dipping line south of the LSV. Moment tensor solutions of these events have large shear components, and the irregular dispersion and long coda of body waves indicate interaction processes between shear cracks and fluids.

"We find a rotation of P-axes orientation for shallow tectonic earthquakes compared to DLF events, indicating that the stress field in the depth interval of DLF events might favor a vertical migration of magma or magmatic fluids," authors say.

"The caldera of the LSV was formed by the last major eruption of the East Eifel Volcanic Field only 12.9 kyr ago, fed by a shallow magma chamber at 5 – 8 km (3.1 – 5 miles) depth and erupting a total magma volume of 6.7 km3 (1.6 mi3). The observed DLF earthquake activity and continuous volcanic gas emissions around the LSV indicate an active magmatic system, possibly connected with an upper mantle melt zone."

"We cannot say for sure that a large amount of magma is rising and we don't actually expect an immediate eruption very soon, or in the near future," said Dr. Torsten Dahm, Head of section 2.1: Physics of Earthquakes and Volcanoes at GFZ Potsdam and one of the authors of the new study, in an interview published in Deutsche Welle on February 6, 2019.

"It shows us that there is activity going on, and also magmatic activity. And it's the first time that we have direct evidence, meaning direct in the sense of observing seismic signals. So we know it's really occurring now," Dahm said. 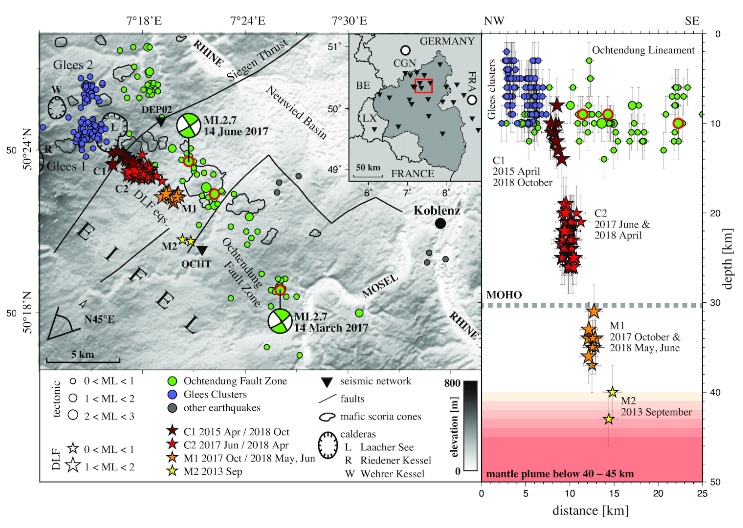 "This is a destructive volcano," Dahm added. "13 000 years ago it erupted with such violence that its ash stopped the Rhine River. I still can't get over that. It makes me wonder, how are we monitoring Lake Laach right now, and what should we improve?"

Asked about CO2 gasses bubbling up in parts of the lake, Dahm said that there is a danger in this region. "And everywhere where you have CO2. As you know, CO2  can be dangerous. I always thought it was forbidden to swim in some areas of Lake Laach, or at least it was not recommended to swim there."

Activity at the East Eifel volcanic field began about 0.65 – 0.45 million years ago with the formation of scoria cones, lava flows and tephra deposits.

The Reiden volcanic complex at the western end produced a series of scoria cones, lava flows and lava domes from 0.45 to 0.35 Ma.

Activity resumed around 0.215 Ma, continuing until 0.115 Ma, with the formation of scoria cones, maars and lava flows.